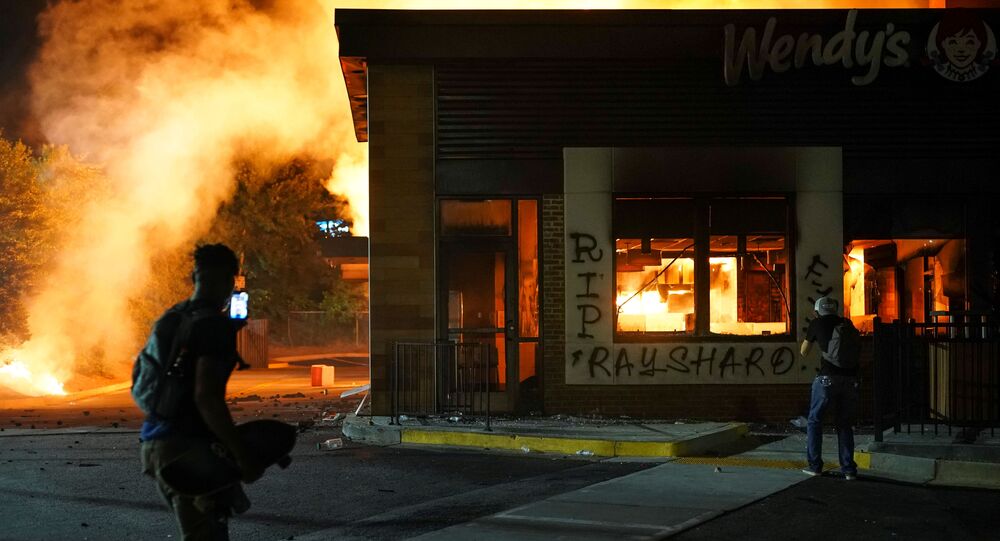 Rayshard Brooks, 27, was shot and killed outside a Wendy's fast-food restaurant on 12 June following an altercation with police officers who were attempting to arrest him after he failed a sobriety test.

Atlanta police have arrested Natalie White, who is suspected of setting a Wendy's fast-food cafe on fire, where black man Brooks was shot dead by police.

Pictures of White, 29, during arrest and at the scene of the arson have been shared on social media.

Suspected Wendy's arsonist Natalie White arrested less than an hour ago. Members of @GwinnettSO fugitive unit found her. @USMarshalsHQ took her into custody. Fire happened after #RayshardBrooks was shot by #AtlantaPolice @FOX5Atlanta pic.twitter.com/dKtOf1XUJG

Body camera footage from the scene where Brooks was shot suggests that White could also be his girlfriend, as he tells the officers her name.

Following Brooks' death, protesters gathered outside Wendy's restaurant on Saturday, when someone set the building on fire. Video footage from the scene shows the entire building engulfed in flames.

Fire at Wendy's on University Ave in southwest Atlanta raging. A night to remember in Atlanta: Rayshard Brooks shot by an officer, the chief of Atlanta police resigned, and protesters stormed the interstate. Now, fire. #AtlantaShooting #AtlantaProtest pic.twitter.com/Fgjq7jhDiZ

On 12 June, Brooks tried to flee after failing a sobriety test at the drive-thru of a local Wendy's, where he fell asleep in his car, obstructing the customer line. Video footage from the scene shows how he resists the arrest, grabs a Taser from one of the officers and starts running away while being chased by the officer. Then, the sound of gunshots is heard.

Former Atlanta police officer Garrett Rolfe, who shot Brooks, now faces 11 charges, including felony murder, in connection with Brooks' death, according to Fulton County District Attorney Paul Howard. The second former police officer involved in the incident, Devin Bosnan, faces three charges, including aggravated assault for standing on Brooks' shoulder after he was on the ground suffering from gunshot wounds.

The District Attorney said that Rolfe could face the death penalty, while Bosnan faces up to 20 years in prison.