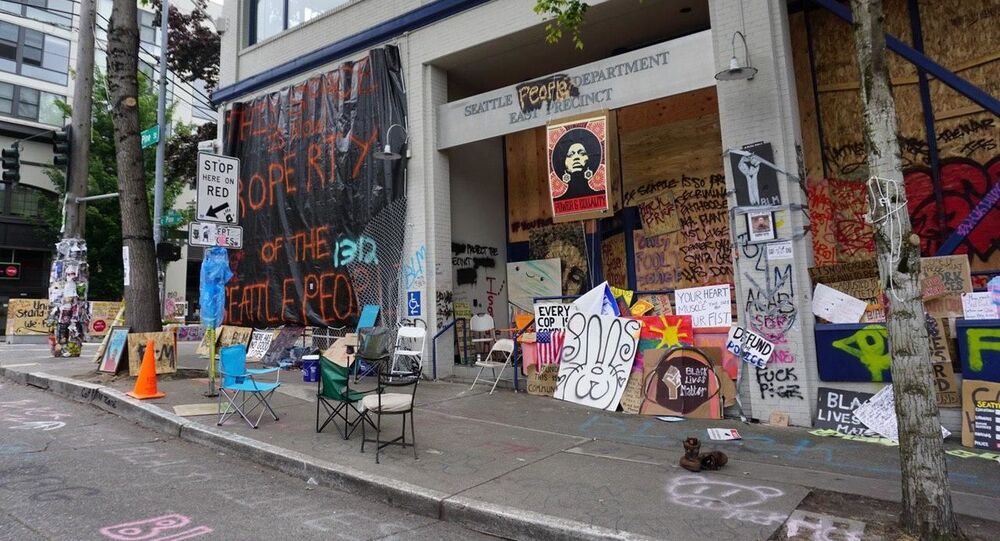 SEATTLE (Sputnik) - A leader of Seattle's protest movement, in an interview with Sputnik, denies ever intending to secede from the United States and downplays the takeover of an entire city neighbourhood, claiming it was the result of an unexpected and unwelcome rogue initiative that was amplified by media hype.

Lewis is listened to by many in the "Capitol Hill Organised Protest", or "CHOP" community, including a group of disciplined men responsible for maintaining order in the area, which has been off-limits to the police for over two weeks already.

Lewis recalls that protesters had not expected the police to retreat from Capitol Hill, as their whole intention was for the officers to relieve the barricades "so that we could walk peacefully through". Police officials were quoted in the media as saying that they left the precinct to avoid friction with protesters at the height of demonstrations and did not expect them to take over the building.

© Sputnik /
Seattle protesters against racism and police brutality in June 2020

Lewis also says that they posted guards "to protect the precinct itself", as there might be other individuals apart from protesters who "wanted to potentially harm the precinct".

"And later on in the day, a random unaffiliated person who is a self-declared anarchist claimed this land as a Capitol Hill Autonomous Zone - CHAZ. None of the leadership, none of the organizers had that knowledge, nor the sentiment. The media caught wind of it. It ripped. It was now CHAZ", Lewis says.

According to Lewis, organisers even resorted to a rebranding to disavow the concept of the "anarchist autonomous zone", leading them to change the name of the area from CHAZ to CHOP.

Lewis estimates the number of protesters in Seattle to be "in the thousands", many of whom live in tents set up along the edge of the stadium and in an adjacent public park, parts of the barricaded CHOP territory. Apart from protesting, they entertain themselves with political debates, art, gardening, spontaneous street concerts, yoga and self-defence classes. Lewis takes pride in the "distributed leadership" and "fruitful donation system" of the enterprise.

© Sputnik /
Seattle protesters against racism and police brutality in June 2020

Men with radios and binoculars, some in tactical or bullet-proof vests, are on guard at the CHOP entrances and swiftly interfere when conflicts occasionally erupt among the diverse population of the zone.

Though Lewis denies the presence of people in "militarised gear", reports tell about a man with two guns in holsters, pepper spray and a telescopic truncheon who punched a protester in the face for apparently trying to set ablaze an umbrella. It was not immediately clear whether the attacker belonged to the CHOP security forces. The injured was treated by volunteer medics.

Lewis several times uses the word "occupation", but corrects himself immediately. He claims that people in the neighbourhood are "fairly supportive" of the cause. At the same time, there were media reports that business owners were asked for donations to the budget of the protest. Lewis could not confirm or deny these reports, but he said that other organisations "accepted tens of thousands of dollars" in the name of the protesters.

"As one of the organisers and one of the initial people, I have not accepted a single cent from anybody and actually have put in $4,500 of my own money protecting, supporting facilities here with the people", he added.

A major crisis erupted last weekend when two shootings near the CHOP zone left one protester killed, two more people wounded and forced Durkan to announce that the city will move to reclaim the neighbourhood. The mayor indicated she prefers a negotiated solution and will try to reach out to protesters, while SPD Chief Carmen Best said that they will seek greater powers to use force, which have been constrained by a court order. Best added that though most demonstrators are peaceful, there are also "groups of individuals engaging in shootings, rape, assaults, burglary, arson, and property destruction".

Lewis called Saturday's fatal shooting "a horrendous crime" perpetrated just outside CHOP borders by an external person. He blamed the city for refusing to send first responders from a neighbouring fire department to the scene and provided a video of a person standing on his knees in front of a fire truck moving backwards into a garage.

"...the fire truck left the precinct of the Fire Department, stopped, reversed, the garage doors closed, leaving our medical staff literally kneeling, begging for the floor for the officers to come", Lewis says. "At that point, we realized that we were abandoned by our city. We ran the individual to the hospital."

Police said that on Saturday night, when a 17-year old was shot dead and a 33-year old critically wounded, law-enforcement officers were met with a hostile crowd that prevented them from getting to the victims. Lewis said that officers did "a perimeter check and we confirmed with them that the shooter was gone". He said that it is "a community decision" whether to let police on the grounds.

The shootings and the mayor's announcement has divided the CHOPers, with some leaving the grounds and others opting to stay and reinforce the barricades in anticipation of a police attack.

Lewis did agree there is a lack of consensus, but his personal recommendation is to abandon the precinct and "continue disruptions in other ways to force the change".

"It's simply a place", he says. "That said there is quite a large amount of people who believe that this precinct is a symbol and they are willing to put their lives on the line to protect it. Because of that I will stand with them."

Protesters took over the six-block area after the death of black Minneapolis resident George Floyd in police custody prompted nationwide protests against police brutality. However, the protests have at times turned into riots that included violence against police as well as acts of vandalism, arson and looting.

US President Donald Trump has warned that any "Autonomous Zone" will be met with force, in an obvious reference to the situation in Seattle. He has repeatedly criticised local authorities for letting the situation get out of control and has threatened to step in unless the mayor and the Washington state governor, Jay Inslee, "do their job".