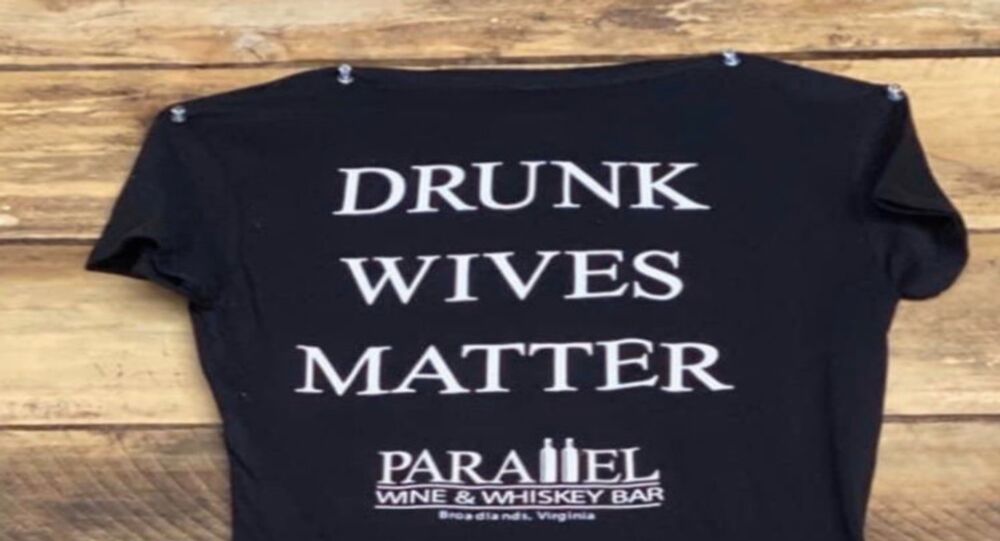 The owner of Parallel Wine and Whiskey, a bar based in Ashburn, Virginia, recently issued a public apology after its merchandise was widely criticized for appearing to be insensitive toward the Black Lives Matter movement.

The item in question, a shirt which has since been removed from the business’s offerings, featured the words “Drunk Wives Matter” printed in large, white letters. Below the phrase, the business’s logo was imprinted.

Racism will never heal if our white brethren continue with mocking #BlackLivesMatter with tee-shirts like this. The owner of @Parallelwine Jason Bursey here in #LoudounVA is flying his racist freak flag. Mocking. Posting. Deriding. Supporting DJT all the way. #2020worstyear pic.twitter.com/XLWdmNYNow

The wording is a clear reference to the Black Lives Matter movement and the protest chant against police brutality and racism, calls which were recently reignited following the May 25 in-custody death of George Floyd, a black man who died after a white police officer in Minneapolis, Minnesota, refused to remove his knee from Floyd’s neck.

In a Monday Facebook video post, 44-year-old bar owner Jason Bursey told viewers that he was sorry for the merchandise and if any individuals had been offended.

"I will apologize if my shirt offended anyone," Bursey said Monday in a Facebook Live video. “l will apologize if anyone is offended by that shirt,” he continued. “I’m not apologizing for anything else. I haven’t done nothing wrong. I don’t feel the need to.”

Many on social media viewed the shirt sold by Parallel as mocking the Black Lives Matter movement and its goals, despite Bursey explaining that he sells several unusual shirts that are meant to be funny.

Prior to the Facebook post, Bursey explained the situation to the Burn, a news site for Ashburn residents.

The bar owner said that he had been selling the shirt for more than a year and that the same phrase is printed on merchandise sold by numerous online stores. He added he didn’t personally design the shirt and didn’t come up with the slogan, although he did place his logo on the merch.

Bursey said he removed the shirt, which was hanging inside the bar, after a friend criticized it in the wake of recent protests after the killing of Floyd.

“I have several shirts that say other funny things as well — ‘Make Merlot Great Again’ — I play off things with no ill intent whatsoever,” Bursey said. “I’ve had that shirt for a year or a year and a half.”

“When the social climate changed over George Floyd, a buddy of mine who is half black … emailed me and said ‘I was on the patio over the weekend and happened to see that shirt. I feel with the social climate maybe now is not the best time to have that shirt up.’ I usually stand behind whatever I do, but I responded back and said, ‘This is one time I don’t disagree with you. You’re right, and I’m going to take it down,’” he continued.

Bursey said in his Facebook live video that the controversy started when 38-year-old Heather Gottlieb of Leesburg “maliciously created” a social media post on Sunday about the shirt “with ill intent toward me because she doesn’t like me.” Bursey claims this is not the first time she has posted negatively about him and Parallel.

“She went onto every public platform I’ve been living on the past few months in COVID … and posted the picture of the T-shirt and put it out there calling me a racist, portraying it as if I put that shirt up to get attention off the Black Lives movement,” he told the Burn.

“With the sensitivity of people, it’s easy to get them to jump. She’s out there trying to destroy me, and it’s horrible that everyone is biting without any knowledge of what’s actually going on.”

In a June 14 Facebook post that included an image of the shirt, Gottlieb wrote that the bar’s owners were “straight up racists,” and that the “word” needed to be spread.  Speaking to the Washington Post, Gottlieb stated that she “didn’t realize it would blow up like it did.”

“It appears it needed to,” she added.