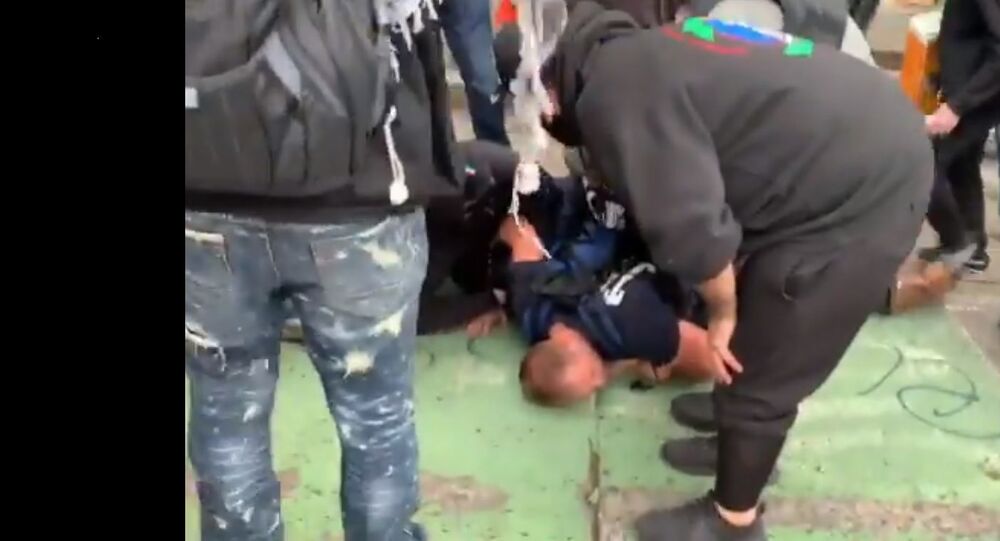 The so-called "Capitol Hill Autonomous Zone", or "CHAZ", was established by protesters around the East Precinct after police retreated from the area on Monday.

Protesters in Seattle held down a Christian street preacher in the area of the self-declared "Seattle Autonomous Zone" on Saturday.

Footage circulating on social media shows protesters pinning him to the ground as he shouts, "You're choking me" before they let him go.

BREAKING: Group of Antifa holds down a street preacher as he screams ‘You’re choking me’ in Seattle Autonomous Zone pic.twitter.com/1ZfjHe9V3n

The reaction to the post has been controversial: some users said the man did not suffer much because it only lasted a few seconds, while others accused the protesters of hypocrisy and questioned why they were so harsh with the preacher in the first place.

"Looks like chokeholds are acceptable in the country of CHAZ", another user tweeted.

They are not principled about being tolerant. They are only tolerant when it is convenient, it is all done with expediency. Classic liberals were at least principled in freedom of speech.

Watch the video. No one had arms or hands or anything else anywhere near his throat/neck. Also, they let him back up 4 seconds after he said he felt choked. Not 8 MINUTES AND 46 SECONDS LATER

Another video taken moments earlier shows the same preacher pulling a man by his T-shirt who is holding a speaker and another protester then takes it. The preacher was apparently trying to get the speaker back from protesters who had taken it away from him, which is shown in the next video.

I keep seeing updates about this street preacher getting “attacked” in #CHAZ and I just felt like sharing the video I took this morning, where you can see that he is being very aggressive. What I witnessed was this man screaming in people’s faces, pushing, grabbing, and being- pic.twitter.com/lYrF5p5AhL

FIRE AND BRIMSTONE STREET PREACHER GETS HIS SPEAKER STOLEN BY CITIZENS OF CHAZ@ElijahSchaffer pic.twitter.com/qkP7uHW0Qy

Finally, another footage shows the moment of "reconciliation", as protesters swarm the preacher and hug him, although he is not comfortable with it and is heard saying, "This is a very forceful hug". One of the protesters goes on to kiss him on the cheek before he escapes the hugs and carries on with his preaching, followed by protesters.

Police have been unable to operate in the CHAZ for several days now, as protesters will not allow them to enter the area. According to Seattle Police Chief Carmen Best, there are reports about "rapes, robberies, and all sorts of violent acts" in the CHAZ, which the police cannot respond to. Other reports say "armed guards" are placed at the perimeter of the CHAZ asking for IDs, while local residents and businesses are asked to pay a "fee".

"Our country is gone here, Capitol Hill", the preacher says on the video.