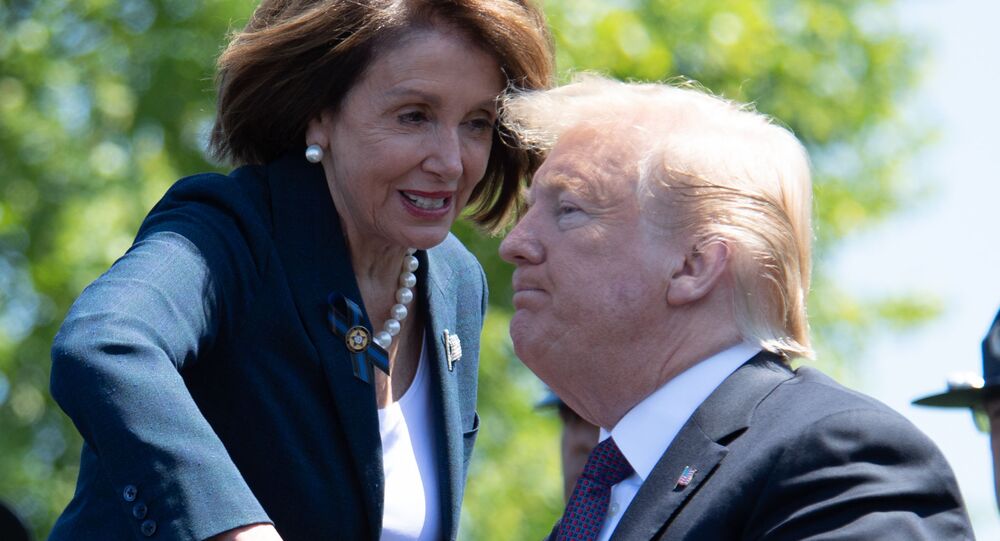 House Speaker Nancy Pelosi and Donald Trump have traded some barbs over the last few days, after it was revealed by the president that he was taking hydroxychloroquine as an unproven precautionary measure against coronavirus. Pelosi then rushed to say that Trump should be more cautious with such health experiments due to his apparent “obesity”.

Trevor Noah, the South African comedian who hosts the Daily Show, is no stranger to making fun of top American politicians, but came as close as ever to defending Donald Trump following Nancy Pelosi’s “fat-shaming” comments, after she called the US president “morbidly obese”.

Pelosi’s reaction followed Donald Trump’s revelation this week that he was taking the drug hydroxychloroquine to protect himself from COVID-19, despite warnings from the US Food and Drug Administration that the medication should not be used outside of hospitals as the measure has not been officially approved. When asked during a CNN programme about her opinion regarding Trump’s initiative, the House Speaker did not hesitate to speak her mind.

“I would rather he not be taking something that has not been approved by the scientists,” Pelosi said. “Especially in his age group and in his, shall we say, weight group, morbidly obese, they say. So I think it’s not a good idea.”

© REUTERS / KEVIN LAMARQUE
Speaker of the House Nancy Pelosi wears a face mask to protect from the coronavirus disease (COVID-19) during a ceremonial swearing-in for Rep. Tom Tiffany (R-WI) in Washington, U.S., May 19, 2020

However, Noah, who himself took a sarcastic, critical tone when addressing Trump’s attempt to self-medicate was not that happy with Pelosi’s “diplomatic” reaction either.

“Oh no, Nancy!”, the comedian cried while covering his face in his palms. “Morbidly obese?’ That is definitely shots fired.”

The show host then went on to claim, albeit with a dose of sarcasm, that the Speaker had suggested that the president was “too fat to live” by her use of language, while consequently fat-shaming “a lot of people who aren’t Trump”.

Following Nancy Pelosi’s comments, Donald Trump rushed to call her “a sick woman” with “a lot of mental problems”. The House Speaker reacted to this by saying that she did not know he would be so “sensitive” about his weight. But some social media users might have indeed taken the politician’s comments way too personally, and accused her of criticising people for their weight, although some of them were still on Pelosi’s side.

I hate to agree but fat shaming Trump is lowing yourself to Trump's level. We all know Trump shames people about their disabilities, looks and size, but do we lower ourselves to his level? no.

Morbidly obese is term of art, and it puts Trump in a category for higher risk, as does his age. It's not weight shaming. Did she also age shame him?

Meanwhile, according to Sky News, the 73-year-old American president passed the obesity threshold last February when his body mass index (BMI) hit 30.4. According to estimates, everybody above 30 is considered “obese” but to be technically regarded as “morbidly obese”, one's BMI must be 40 or higher.