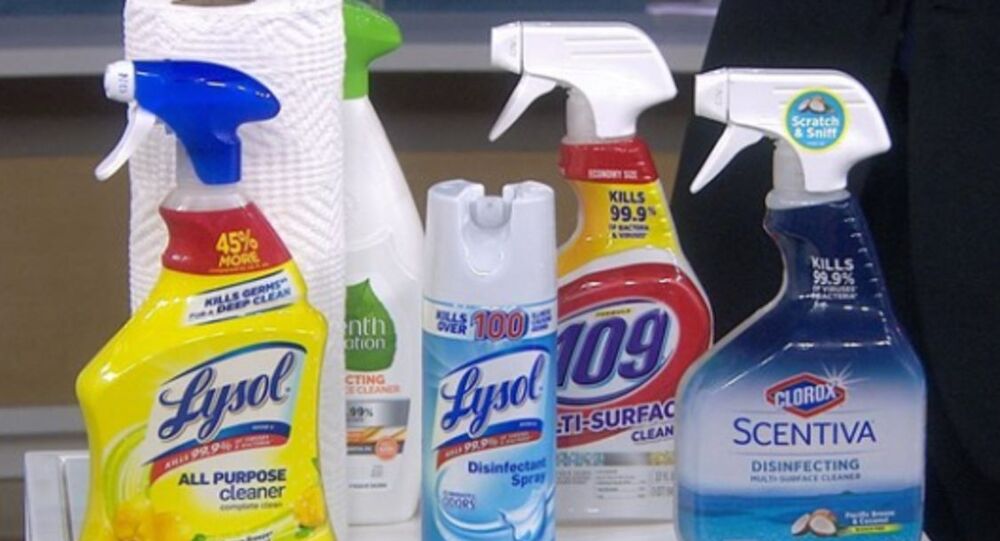 Unintentional poisonings in the United States from bleach and disinfectants have spiked in recent weeks after US President Donald Trump made comments that suggested Americans could inject disinfectant chemicals as a means of treating COVID-19.

Time reported Tuesday on data from the American Association of Poison Control Centers (AAPCC) which showed that the number of calls to poison control hotlines for accidental poisonings from household cleaners and disinfectants have surged over the past two months, nearly doubling the number of cases reported in March 2019 and more than doubling April 2019's total case numbers.

Based on the US Centers for Disease and Control and Prevention’s Morbidity and Mortality Weekly Report, accidental poisonings from bleach and other disinfectants were in fact on the rise from January 1 to March 31, before Trump’s comments. However, they skyrocketed after he made the medically unsafe suggestions.

Accidental poisonings with household disinfectants in January, February and March of 2020 were up 5%, 17% and 93% respectively compared to the same months in 2019, according to the AAPCC. Following Trump’s comments, the increase for April 2020 was 121% compared to April 2019.

Trump made the wild suggestions during an April 23 White House Coronavirus Task Force briefing, when officials presented the results of a government study which concluded that the coronavirus appears to weaken quickly when exposed to sunlight and heat, and that bleach and isopropyl alcohol, when used on surfaces, could kill the virus within minutes.

In response to these announcements, Trump suggested that the same approach could potentially be used inside the human body as well, a declaration which quickly triggered the collective eyebrow-raising of many netizens.

“I see the disinfectant, where it knocks it out in a minute. One minute. And is there a way we can do something like that, by injection inside or almost a cleaning. Because you see it gets in the lungs and it does a tremendous number on the lungs,” Trump said to health officials present at the April White House briefing. “So it would be interesting to check that.”

Days later at another White House briefing, Trump told reporters that he took no responsibility for the fact that some individuals took him seriously, stating that he couldn’t “imagine why” such a spike in reported poisonings would be unfolding. Following the questionable remarks, Trump reiterated to journalists that his comments were meant to be “sarcastic.”