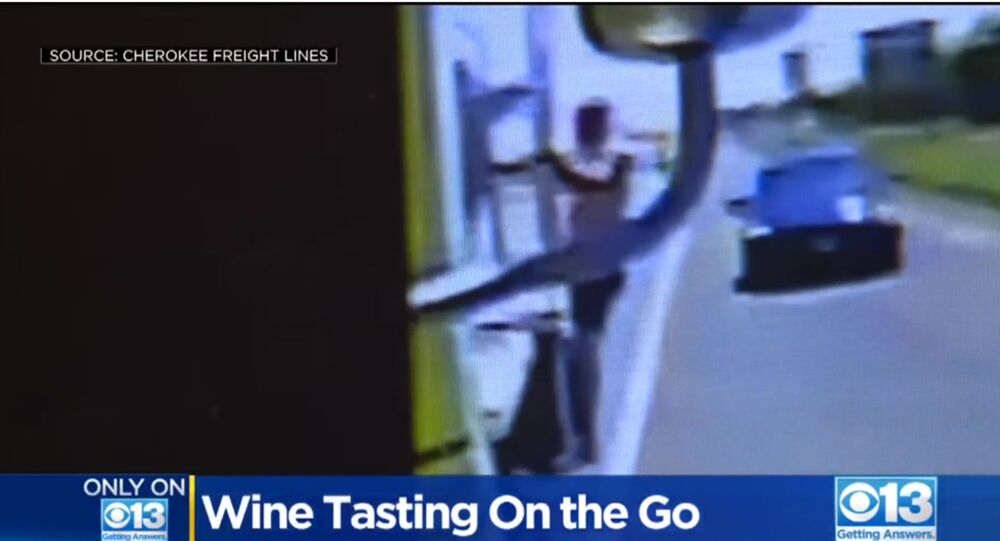 Quarantines and lockdowns amid the global COVID-19 pandemic have a lot of people craving extra libations. Such a thirst apparently led a California man to pull off a wine heist like none seen before, with the wild ride being caught on film.

On Thursday, Gabriel Moreno was taken into custody by officers of the Modesto Area California Highway Patrol (CHP) after he allegedly jumped onto a moving Cherokee Freight Lines tanker truck carrying bulk red wine, climbed under its belly to unscrew a valve and chugged the wine as the tanker drove down Highway 99 in California.

The dashcam video from the truck first shows Moreno in a sedan, putting his hazard lights on, directing the truck to the side of the highway. In the footage, Moreno is seen running over to the passenger side of the truck wearing only his underwear. According to local outlet CBS 13, the driver thought he may have had a mechanical issue, so he pulled over, without seeing Moreno.

Once back on the freeway, a camera from a different angle onboard captures Moreno jumping onto the back of the wine truck, and he is seen riding on the side of the tanker without any shirt or footwear. He proceeds to climb underneath the truck as it travels at a high speed on the freeway.

After seeing he was losing fluids according to a gauge on his dashboard, the tanker driver pulled over and called the authorities. According to the local outlet, Moreno was allegedly found by the driver beneath the tanker after having unscrewed a valve underneath it while it was traveling north on Highway 99. This caused the tanker’s wine to rush out, with Moreno reportedly gulping up as much of it as he could.

Cherokee Freight Lines said that it lost about 1,000 gallons of red wine - enough to fill up about 5,000 bottles - in the incident, with most of it presumably ending up on Highway 99.

“This individual was able to release the wine from under the tanker, and he placed himself underneath the tanker in such a manner - the best way to describe this was somebody doing like snow angels,” stated Modesto CHP officer Tom Olsen.

“I’ve listened to thousands and thousands of calls,” Olsen added. “This one’s up there in the top 10.”

It was truly wine tasting on-the-go. But, you know what they say: “No shoes, no shirt, no service.”