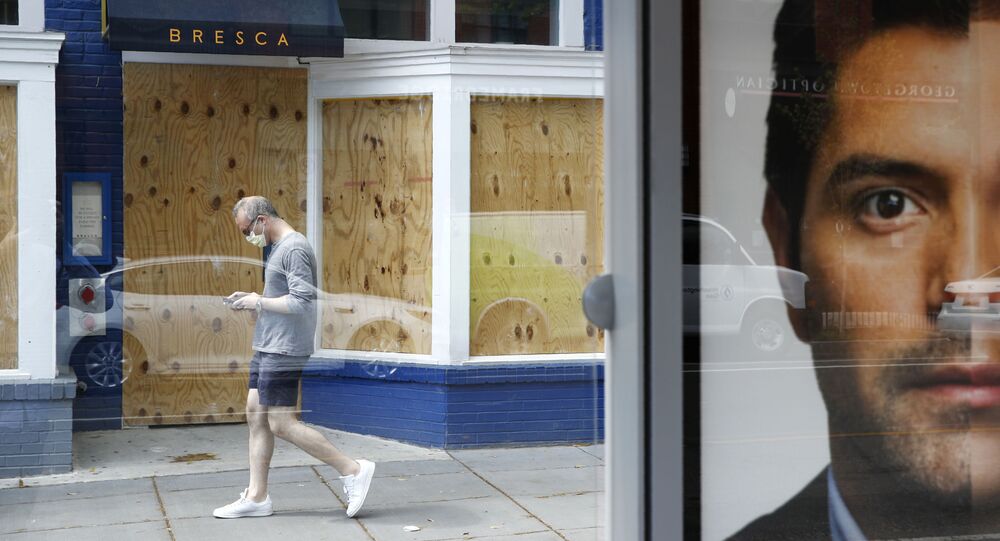 Robots, Joggers and Homeless: How the Streets of Washington DC Look Amid the Coronavirus Pandemic

As many major population centers around the world end up resorting to restrictive measures, such as self-isolation and social distancing, in attempt to curb the spread of the COVID-19 coronavirus, it seems that Washington DC is no exception.

A Sputnik correspondent toured some districts of the US capital to take a look at how the city and its residents are coping with the outbreak.

While car and foot traffic in the city has decreased due to the current situation, it seems that joggers are still doing their thing, as while residents are advised to stay at home, there's apparently no ban on sports activities or on strolling, provided that you're either doing it alone or with those you're living together with.

Homeless people also appear to be present in some parts of the city, some of them pitching tents to protect themselves from the elements.

© AP Photo / Manuel Balce Ceneta
A street maintenance subcontractor for the District of Columbia walks past tents set up by the homeless on a sidewalk in Washington's Dupont Circle.

According to the Washingtonian, the store started doing robotic deliveries on 25 March, though Broad Branch apparently began planning this move about a year ago, mapping the area and obtaining the necessary permits.

A food delivery robot from the Broad Branch Market grocery store goes to work in the Chevy Chase neighborhood of Washington, DC.

​Now, these robots conduct about 10-15 deliveries a day, though the range of these is apparently limited to the neighborhood in question.

No Rest for the Business

While many stores and cafes seem to be closed, some continue to operate, with eateries serving their products to-go.

In one bank branch, clients were allowed inside one at a time, apparently in order to avoid having too many people gathering in a closed space.

Some venues, like one cell phone store, also serve their customers literally at the establishment's doorstep, also in a bid to avoid crowding inside.

© REUTERS / JOSHUA ROBERTS
People wear masks as they wait to enter a Costco Wholesale store during the outbreak of coronavirus disease (COVID-19) in Washington, DC, U.S.

Meanwhile, numerous restaurants and brand clothing stores appear to be closed, waiting for the day when the current crisis blows over and things finally return to normal.

More than 1,500 of the 700,000-plus population of Washington DC have already contracted the COVID-19 infection.