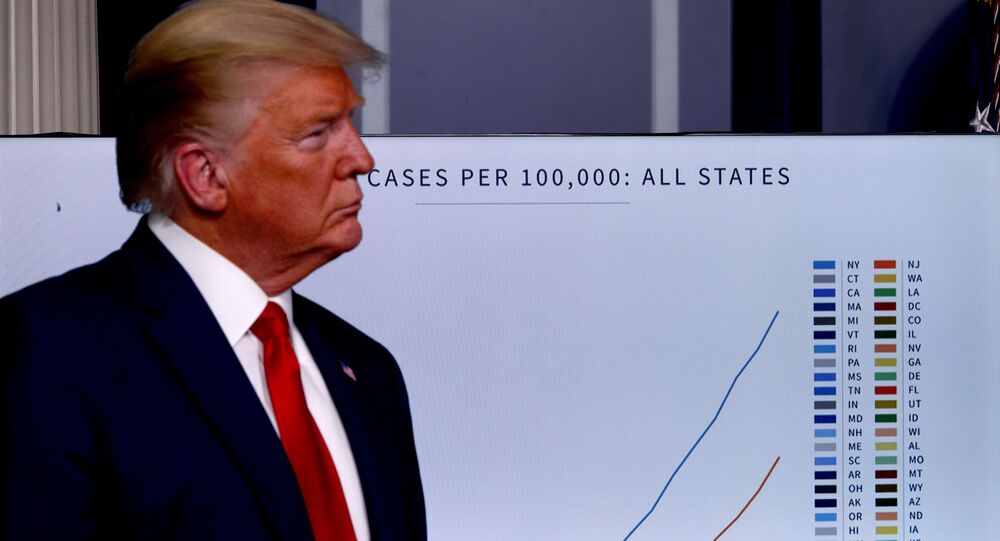 'Never Knew How Bad a Senator You Are': Trump Reacts to Criticism From Schumer

Senator Schumer from New York previously sent a letter to the White House criticising the US president's handling of the COVID-19 situation in the United States.

President Donald Trump has sent a letter to Senator Chuck Schumer saying he "never knew how bad a senator" Schumer was and pointing to the measures the administration is taking to combat the spread of COVID-19 in the US.

"Thank you for your Democrat public relations letter and incorrect sound bites, which are wrong in every way", the letter released by the White House says.

President Trump has sent a letter to Sen. Schumer: pic.twitter.com/uIo8bUcdj0

Trump insisted that Pence has been very competent so far in doing his job to fight COVID-19 and also pointed out to Schumer that a military official, Rear Admiral John Polowczyk, was also assigned with "purchasing" and "distributing" medical supplies, which Schumer allegedly "chose to ignore".

Trump continued that Schumer, along with other Democratic Party members, had wasted too much time on the impeachment proceedings against him and ended up with nothing, while instead they should have used their time and energy to support the people of New York  - the state which has been worst hit by the COVID-19 outbreak.

"If you spent less time on your ridiculous impeachment hoax, which went haplessly on forever and ended up going nowhere (except increasing my poll numbers), and instead focused on helping the people of New York, then New York would not have been so completely unprepared for the 'invisible enemy'", Trump said.

He then said that given all that, "no wonder AOC and others are thinking about running against you in the primary. If they did, they would likely win".

Trump finished the letter by saying, "I've known you for many years, but I never knew how bad of a senator you are for the state of New York, until I became president".

According to the latest count by Johns Hopkins University, the number of COVID-19 infections in the US has surpassed 240,000, with over 5,900 people dead. In New York City, the death toll stands at almost 1,400.