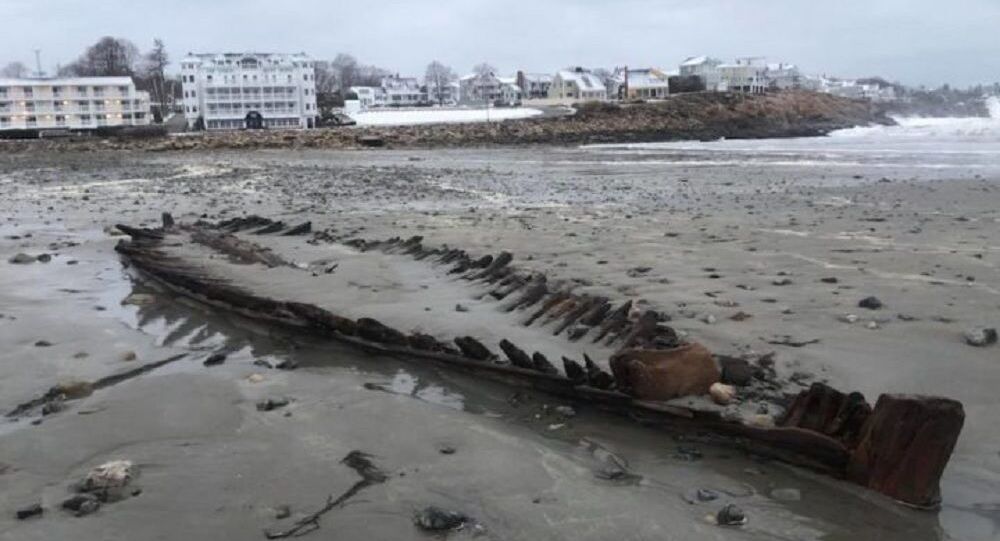 Older Than US? Researcher Identifies Mysterious US Shipwreck – Report

The Maine Historic Preservation Commission has categorised the shipwreck, which was uncovered in 1958 and last exposed by a storm in 2018, as an archaeological site.

A mysterious shipwreck, which is periodically exposed and reburied at the Short Sands beach near York in Maine, has finally been identified, Seacoast Online reports.

The news outlet referred to a study conducted by researcher Stefan Claesson who determined that the vessel was built before the American Revolutionary War, also known as the American War of Independence.

“I believe it is the sloop Defiance. I think the ship is a pinky, a type of cargo ship”, Seacoast Online cited Claesson as saying during a presentation to the Board of Selectmen earlier this month.

According to him, the wreck is 51 feet long, even though the vessel was about 60 feet long when it was built in 1754.

Once again a winter storm revealed some fascinating history at Short Sands Beach. Check out the shipwreck believed to be a Colonial Sloop possibly dating back to the 1750s #history #maine #shipwreck pic.twitter.com/HaJqwUazAS

He said that he mapped the site with a drone and geographic information system technology and that he went to the Peabody Essex Museum to carry out “good old-fashioned historical research”.

“There was a crew of four and they were carrying flour, pork, and other supplies. They were caught in a storm and the ship hit rocks in Cape Neddick Cove. The crew survived, but they couldn’t save it”, Claesson asserted, adding that the vessel wrecked in 1769.

“I’m not trying to be the archaeology police. But people have been interacting with the site for decades. I’d love to see photos or learn anything else about it to be able to tell the full story of the site”, he said.