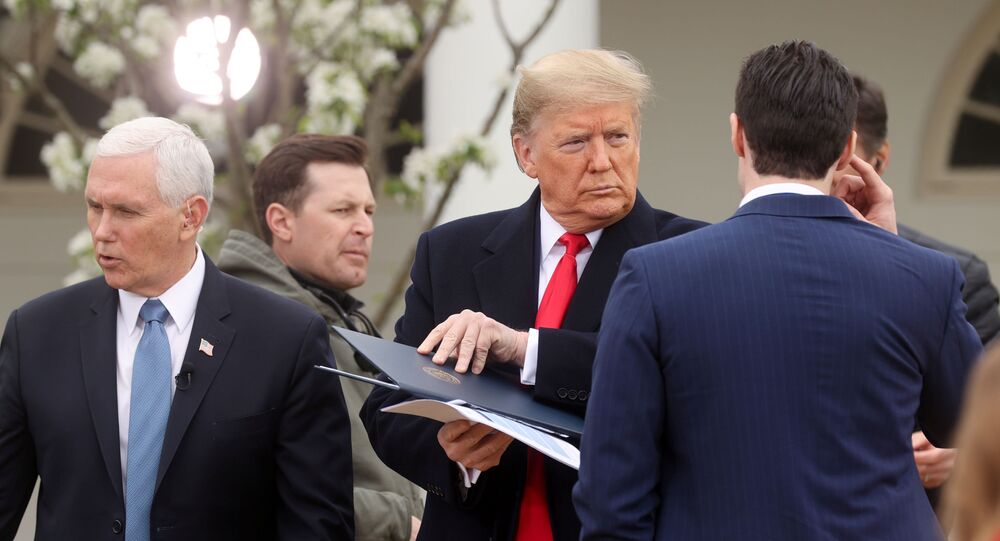 Due to the coronavirus pandemic, airlines worldwide have suspended international flights as nations close borders and impose restrictions for travelers.

US President Donald Trump said he would not let Boeing Co, one of the nation's largest aircraft manufacturers, go out of business in the wake of the financial crisis caused in part by the COVID-19 outbreak.

"We're not letting Boeing go out of business," Trump said in a Fox News interview. "You have to help them temporarily. It's not going to be a long time, temporarily."

Earlier in the month, Boeing confirmed it would seek financial aid from the government in the amount of $60 billion, according to The New York Times. In recent days, the company's stock price has dropped over 40 percent. The new blow follows a loss in profits brought about by last year's grounding of Boeing 737 Max aircraft following two back to back crashes that resulted in 346 deaths.

Сommenting on the loss of profits for the airline amid the COVID-19 virus outbreak, Susan Houseman, director of research at the Upjohn Institute for Employment Research, said that Boeing is not the only company that will see less revenue.

"It’s not just Boeing," she said, cited by The New York Times. "Its supply chain may be irreparably damaged. There will be bankruptcies, companies will lose their workers, and they just can’t restart in six months".

The largest airlines in the US and around the world have drastically cut flights, resulting in jeopardizing the jobs of an estimated 750,000 people directly employed in the US. America Airlines has cut over 50,000 flights, while Delta has announced plans to park at least 600 planes, over half of its fleet, according to USA today.

Earlier in March, Trump suspended most travel into the US from 26 European countries that make up the Schengen area. The US State Department has also warned Americans to reconsider any international travel.

Air traffic between the United States and those countries most affected by the pandemic has dropped an estimated 87 percent, according to the Department of Homeland Security (DHS). Industry passenger revenues are forecast to drop some $252 billion, or 44 percent of last year's gross revenue, the International Air Transport Association (IATA) said in a press release on Tuesday.

According to an IATA Impact Assessment published on 24 March, passenger numbers have been decreasing 33 percent for Europe and 10 percent for Canada and the United States. The EU, as well as the US, imposed travel restrictions that reportedly may be extended.

All operations have been temporarily suspended by airlines including Austrian Airlines, Brussels Airlines, Air Serbia, Air Baltic and others. Several airlines have retired all Boeing-made planes due to the pandemic.

The confirmed coronavirus cases number has surpassed 417,000 globally, according to Johns Hopkins University data. More than 50,000 cases have been confirmed in the US, making the nation the third-highest affected in the pandemic.

Boeing Suspends Dividends, CEO Pay to Get Financial Stimulus From US Gov't Amid COVID-19 Pandemic