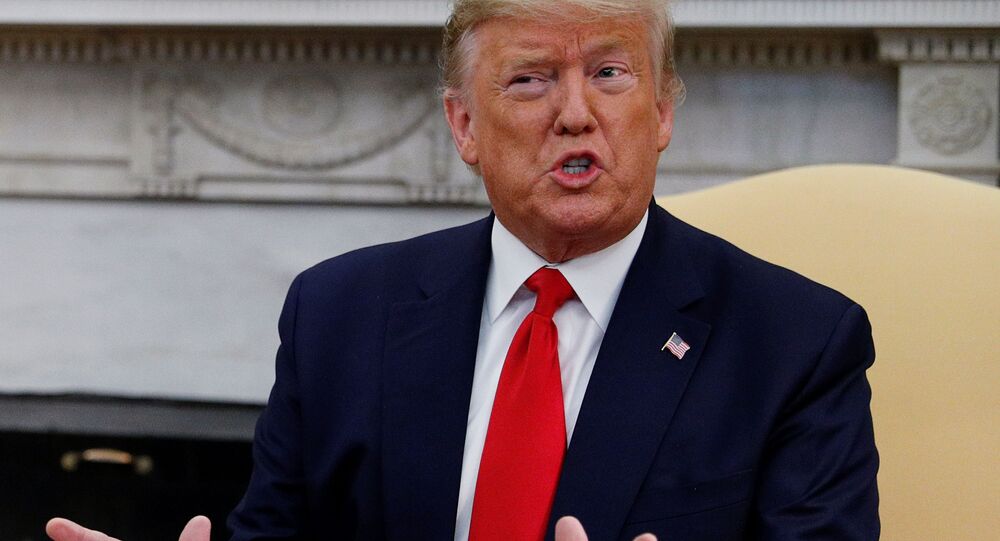 The Russian president’s press secretary, Dmitry Peskov, on Friday said that the Kremlin is bracing for the appearance of additional ‘paranoid’ claims of Russia’s attempts to interfere in the upcoming US presidential vote, adding that the allegations, when they arrive, will consist of lies, falsehoods and fake news.

WASHINGTON (Sputnik) - US Senators Chuck Schumer and Sherrod Brown are urging the Trump administration to impose sanctions on Russia following reports alleging that the country is meddling in the 2020 presidential election, a letter published on Monday showed.

"We urge you to immediately and forcefully impose sanctions on the government of the Russian Federation, any Russian actors determined to be responsible for such interference, and those acting on their behalf or providing material or financial support for these election interference efforts," the senators wrote in a letter to Secretary of State Mike Pompeo and Treasury Secretary Steven Mnuchin.

The list of Russian officials who the senators said should be designated includes Russian President Vladimir Putin and other government. Schumer and Brown noted that the US Congress has provided the administration with a broad range of sanction tools through the Countering America's Adversaries Through Sanctions Act (CAATSA), a bill signed into law in 2017.

The Russian embassy to the US has expressed deep concern over fresh allegations of 'Russian meddling' in the 2020 presidential elections, stressing that an anti-Moscow component in American politics is causing an unprecedented deterioration in the bilateral ties between the two nations.

As the senators demanded new sanctions on Russia, the Wall Street Journal reported on Monday that Facebook has been unable to substantiate claims that Russia is involved in any inauthentic activity in the run up to the 2020 vote.

Facebook spokesman Andy Stone told the newspaper that the company investigated a claim made by an independent researcher over suspicious content in support of Democratic candidate Bernie Sanders.

But the investigation yielded no evidence to substantiate the researcher's claims, Stone told the Wall Street Journal.

In a separate development on Thursday, the New York Timesreported, citing a senior Intelligence official who warned members of the House of Representatives' Intelligence Committee of Russia's alleged meddling in the election process to help Trump win the 2020 presidential race.

Trump hit back the following day, blasting Democrats for launching "another misinformation campaign.”

​Kremlin spokesman Dmitry Peskov said Moscow was preparing for an inflow of new allegations of Russian interference in the US election, noting that the claims are baseless.

Russian officials have repeatedly said Russia does not interfere in the US political system and have insisted that the allegations of collusion were made up to excuse the election loss of Trump’s opponent Hillary Clinton, as well as deflect public attention from instances of election fraud and corruption.