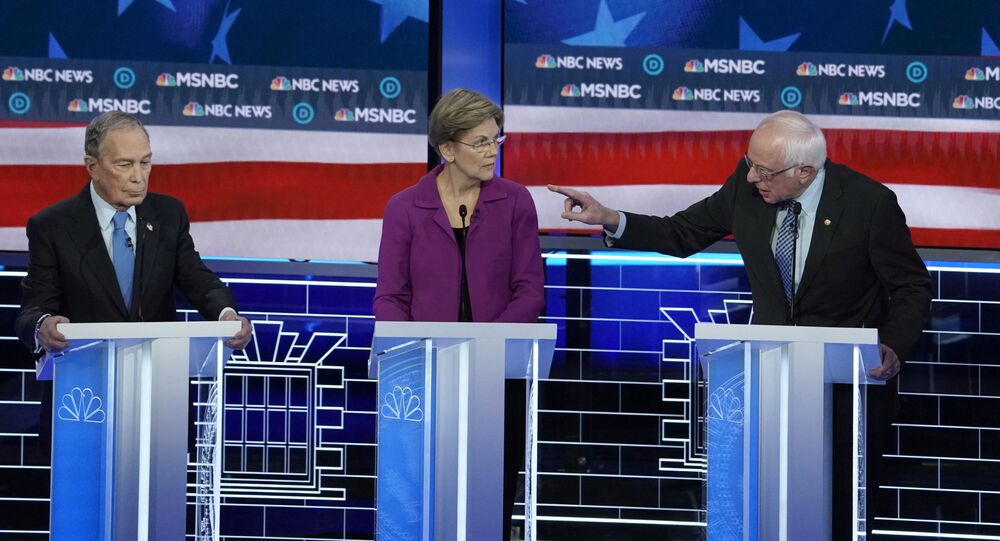 Bernie Sanders, Elizabeth Warren and other Democratic contenders all took their time to slam Michael Bloomberg in Wednesday night's debate in Las Vegas, accusing him of trying to buy his way into the elections.

Warren, who was the first to express her views, claimed she would support whoever wins the nomination, but warned that Democrats “take a huge risk if we just substitute one arrogant billionaire for another.” She also accused Bloomberg of being someone “who calls women fat broads and horse-faced lesbians” while also slamming him for not releasing his tax returns.

Bloomberg tried to refute the attacks by saying it "takes a long time" to release his returns and that he "can't go to Turbo Tax," and that he would be releasing them "in a few weeks," – only to be compared to Trump by Amy Klobuchar with the phrase "We've heard that before."

Bernie Sanders warned that Bloomberg couldn't be elected because he wouldn't be able to assemble a diverse coalition of voters, especially within African American and Latino communities due to his stop-and-frisk policy while mayor of New York City. Bloomberg responded by saying that Sanders has no chance against Trump, asserting that Americans don't want to lose their private health care plans under Sanders’ "Medicare for All" initiative. The comment kicked-off a discussion about health care plans between Pete Buttigieg and Sanders.

Buttigieg reminded the audience that Bloomberg hasn't always been a Democrat, saying the party should nominate someone who at least "actually" belongs to the party. Bloomberg, however, highlighted his experience as an executive and his ability to take on Trump, claiming: “I’m a New Yorker. I know how to take on an arrogant con man.”

Joe Biden and Warren also both accused Bloomberg of "willful ignorance" and "shutting out" the sounds of protests on New York streets while he was the mayor, saying that he should apologize for his policy.

Bloomberg was on the debate stage for the first time, after the Democratic National Committee (DNC) abruptly dropped the requirement that candidates meet an individual donor threshold to qualify. Bloomberg donated $300,000 to the DNC shortly before joining the presidential race last year. Despite participating in the debate, Bloomberg won't be on the ballot Saturday, deciding to focus more on the national primaries in March.