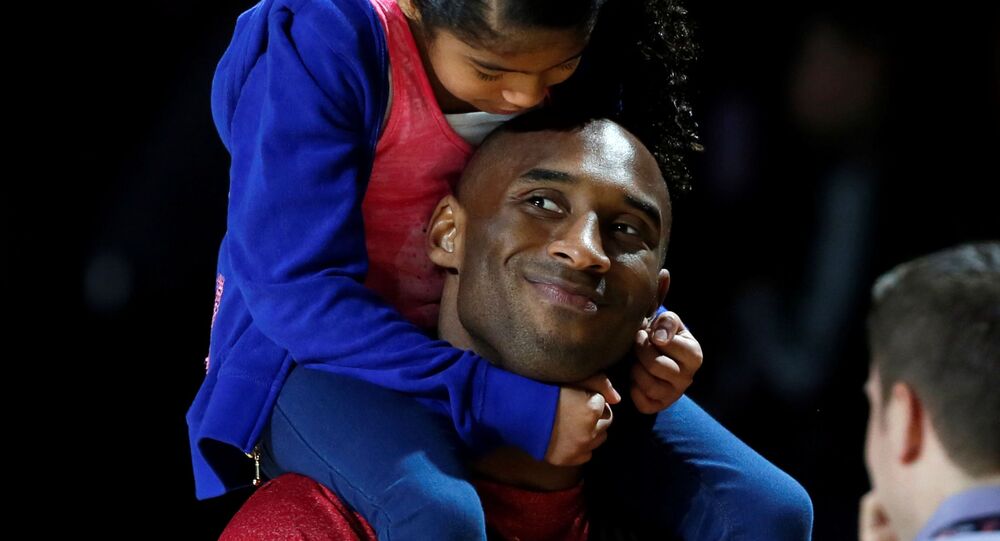 Bryant's death sent shockwaves throughout the NBA and beyond, causing not only his colleagues but a range of celebrities worldwide to pay tribute to the basketball icon.

A five-time NBA champion, who was also known by the nickname Mamba, and two-time Olympic gold medalist, Bryant died in a helicopter crash in suburban Los Angeles that also claimed the life of his 13-year-old daughter Gianna and seven others. Madison Square Garden, home of the New York Knicks, was awash in the Los Angeles Lakers colours of purple and gold – the team Bryant played for when he won his championship titles – and so too were the pylons that mark the entrance to Los Angeles International Airport.

"The NBA family is devastated," NBA commissioner Adam Silver said. "For 20 seasons, Kobe showed us what is possible when remarkable talent blends with an absolute devotion to winning. He was one of the most extraordinary players in the history of our game."

The New Orleans Pelicans and the Boston Celtics started the game by each taking 24-second shot-clock violations in honor of Kobe Bryant. pic.twitter.com/AA3ntFpLtc

Six-time NBA champion Michael Jordan said Bryant would be remembered as one of the game's greatest players of all time. "Words can't describe the pain I'm feeling," Jordan said. "I loved Kobe - he was like a little brother to me."

Kobe was so much more than an athlete, he was a family man. That was what we had most in common. I would hug his children like they were my own and he would embrace my kids like they were his. His baby girl Gigi was born on the same day as my youngest daughter Me’Arah. pic.twitter.com/BHBPN5Wq8V

Brazilian footballer Neymar dedicated his second goal in Paris Saint-German's 2-0 victory at Lille to Bryant, calling his death "deeply saddening for the world of sport and for all of us -- not just for basketball fans but for everything he did for sport."

Barcelona forward Lionel Messi wrote on Instagram: "I have no words ... All my love for Kobe's family and friends. It was a pleasure to meet you and share good times together. You were a genius like few others."

Juventus forward Cristiano Ronaldo said the news was "heartbreaking," adding that Bryant was "a true legend and inspiration to so many," while Manchester United midfielder Paul Pogba added: "Heroes come and go, legends are forever."

Golf superstar Tiger Woods, whose professional career started the same year as Bryant's, recalled competitive qualities that echo those of Woods himself.

"The fire," Woods said of what he most remembered of Bryant. "He burned so competitively hot. He had such a desire to win. He brought it every night. Any time he was in the game he would take on their best player and shut him down for 40 minutes. I think that's one of the best things about him his whole career."

Bryant was also remembered from the red carpet to the main stage of the Grammy music awards show. Music artists including Billy Ray Cyrus, Rick Ross and Kirk Franklin paid tribute to Bryant.

"Here we are," Grammys host Alicia Keys said. "Together. On music's biggest night celebrating the artists that do it best. But to be honest with you, we're all feeling crazy sadness right now. Because earlier today Los Angeles, America and the whole wide world lost a hero. And we're literally standing here heartbroken in the house that Kobe Bryant built." After that, Keys began singing a line from the Boys II Men song "It's So Hard to Say Goodbye to Yesterday." Moments later, she was joined by the band itself.

Other musicians and celebrities, including Kanye West, Kim Kardashian, Leonardo DiCaprio and Taylor Swift also published their tributes on Twitter.

Kobe, We love you brother

We’re praying for your family and appreciate the life you’ve lived and all the inspiration you gave pic.twitter.com/pxbgLOOmpY

My heart is so heavy. No one should ever experience what the families involved are going through. This has affected us all so much but I cannot begin to imagine what Vanessa is feeling losing her husband and her baby girl. I cry just thinking about it. pic.twitter.com/U3osyw6Pzu

Kobe was truly larger than life, a legend. May he and all those who lost their lives today rest in peace. Love and condolences to his family. LA will never be the same.

My heart is in pieces hearing the news of this unimaginable tragedy. I can’t fathom what the families are going through. Kobe meant so much to me and to us all. Sending my prayers, love, and endless condolences to Vanessa and the family and anyone who lost someone on that flight.

Current US President Donald Trump and former President Barack Obama both had expressed their condolences earlier.