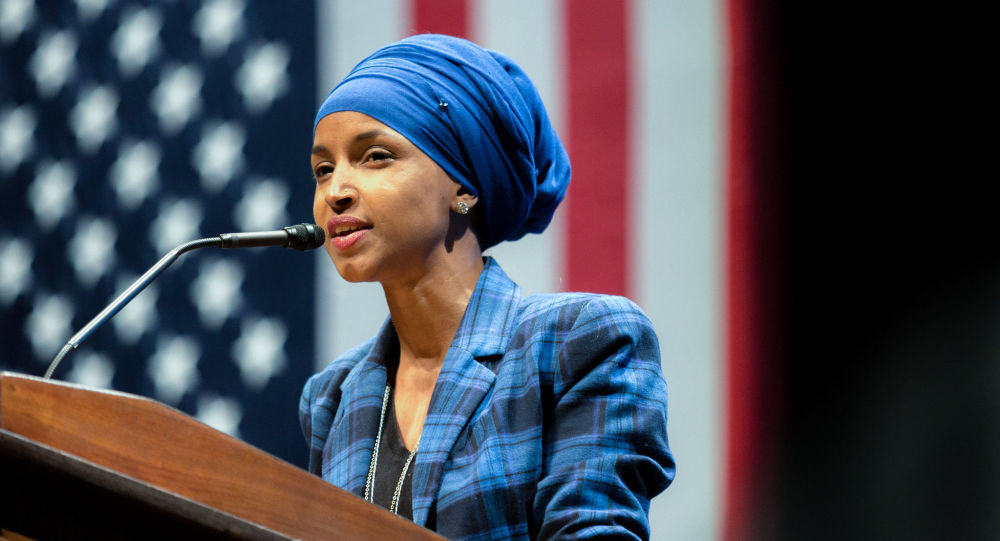 'Sickening!' Netizens Angry at Video of Ilhan Omar Giggling When US Casualties in Iraq Are Discussed

Users found Omar's behaviour to be disrespectful to the US military personnel who have perished in Iraq, as well as inappropriate for broadcasting on national television in the first place.

Video of Democratic Rep. Ilhan Omar (D-MN) laughing while her colleague Sheila Jackson Lee (D-TX) was talking about US casualties in the Iraqi war has triggered a lot of negative comments from users on Twitter.

Omar was spotted giggling and joking around with another Democratic congresswoman in the background during a House Progressive Caucus press conference on Iran that took place on Wednesday.

Most Twitter users said Omar's behavior was inappropriate and disgraceful, as the topic being discussed was a war that had claimed the lives of a lot of her compatriots.

"Why they are getting any air time is shocking to me. American families that lost loved ones or loved one's lives were altered- deserve better then the preschool giggles the squad is giving them", another user agreed.

"Wow - Real Classy! Way to take casualties seriously and pay respect for those who made the ultimate sacrifice. If she (and the whole lot of them there) had a fraction of the honor and commitment those fallen heroes had, maybe they'd actually do something for the good of the US", a user concluded.

"She acts so silly and giddy when the topic of terrorism is about", another netizen added.

I’m at a loss for words here.

A colleague is taking about 4,000 dead service members and @IlhanMN and @RashidaTlaib think it’s an appropriate time to crack a few jokes and laugh in front of the camera?

Some said that the topic of discussion did not even matter, as it was inappropriate behaviour anyway to talk and laugh while her colleague is giving a speech.

"Like, did you forget you were behind the primary speaker on national television or do you really think this is comical?", a user commented.

"I don't know what Ilhan Omar is laughing about; it could be something unconnected to the lady's speech. I don't know anything about her. I do know that to act in such a way, on or off-camera, is childish, rude, and unforgivably disrespectful to the lady who is speaking", another user said.

Another footage posted on Twitter also captured Omar speaking about "having PTSD [Post-Traumatic Stress Disorder]" whenever the issue of war is brought up.

"I feel ill a little bit because of everything that is taking place and I think every time I hear of conversations around war I find myself being stricken with PTSD", Omar says on video.

.@IlhanMN says she has PTSD and the talk of conflict w/ Iran is making her uneasy pic.twitter.com/jzjUfKjEUY

Her comments, however, also seemed to have backfired on the politician, as a series of tweets indicate.

"Every time we hear her talk, WE also feel very uneasy..", one of the netizens wrote. "She being on foreign affairs committee makes me uneasy", another user agreed.

Call the medic! @IlhanMN says she feels “ill a little bit” with all this talk of conflict with Iran. Well, I’m sure her dismissive talk of al Qaeda and 9/11 made a lot of Americans feel way more ill (and angry). https://t.co/JGaKAeonCt

Some even said that it was disrespectful to people who actually have PTSD as the disorder "is not what she thinks it is".

Ilhan Omar belongs to the so-called "progressive" wing of the Democratic Party and is also a critic of US policies in the Middle East. However, there have been criticisms of Omar for supposedly having double standards with respect to Middle Eastern countries, as she has been repeatedly accused of promoting an antisemitic stance in the United States and openly supporting the pro-Palestinian BDS movement.

The allegations of anti-semitism stem from a suggestion that Ilhan Omar had insinuated that Jewish people in America hold financial sway over the US political system, which the congresswoman denies.