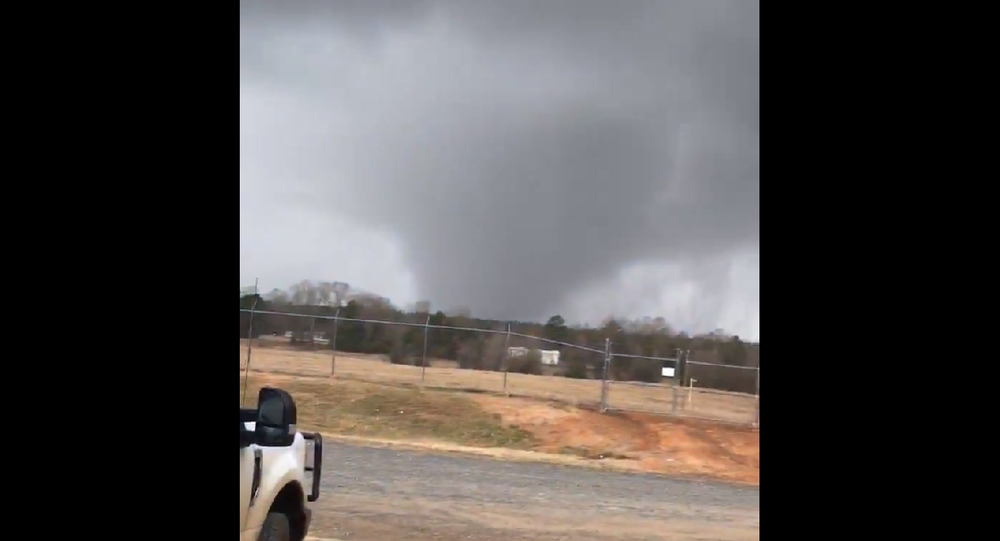 A slew of powerful storms have ravaged southern Louisiana and Mississippi, sprouting multiple destructive tornadoes as they sweep across the two states. At least one person has been reportedly killed by the storms.

Multiple twisters have been spotted in the region as of Monday evening, but the storms are ongoing. As the storms race to the northeast, the funnel clouds have destroyed homes, shops and wooded areas.

Cookie Ogden shared this video of what appears to be a tornado. The NWS is on the way to Webster Parish to survey damage. pic.twitter.com/FncfAtshPF

@PecosHank @NWSJacksonMS @spann Large Rain wrap tornado on the ground just south of Edwards Mississippi this was as of five minutes ago pic.twitter.com/EOSK8GcwXA

​Citing the Vernon Parish Sheriff's Office, Accuweather reported that one person had been killed by a fast-moving tornado in Louisiana between the towns of DeRiddler and Alexandria, which are nearly 60 miles apart.

The US National Weather Service warned Monday of the “potential for sustained warm-sector supercells” as the atmosphere becomes increasingly unstable ahead of a strong cold front. Temperatures Monday soared near 80 degrees Fahrenheit, but are forecast to plummet to just 40 degrees overnight.

Video from the Tornado in Rosepine, LA.

​“Numerous severe thunderstorms will continue to affect parts of the Lower Mississippi Valley region this afternoon and evening, and into portions of Alabama and the Tennessee Valley,” read a warning by the Storm Prediction Center (SPC) Monday afternoon. The SPC is part of the National Weather Service, managed by the National Oceanographic and Atmospheric Administration (NOAA).

“Several tornadoes - including a couple of long-track/significant ones - along with damaging winds, remain the primary hazards. The peak tornado risk is expected through early evening, centered on northern and central Louisiana into central Mississippi,” the notice continues.

​Local CBS affiliate WAFB reported that western portions of the Louisiana state capital of Baton Rouge were at risk of tornadic activity as two other funnel clouds wrecked homes and power lines, cutting electricity across the area.

Footage filmed in Pineville, Louisiana, just north of Alexandria, showed destroyed homes and debris scattered across fields and roadways. Based on radar data, the NWS predicted the tornado’s winds might have topped out at between 110 and 150 mph, making it an F1 or F2 on the Fujita scale for estimating tornado strength.

HEARTBREAKING - We're getting our first look at the damage left behind in Louisiana as tornadoes trek across several parishes in the southern portion of the state. Here's a look at the scene from Pineville, just north of Alexandria. Storm coverage continues here @WeatherNation pic.twitter.com/RoxH9FWnpR

​Aerial photos snapped above Hinds County, Mississippi, showed trees snapped in half and ripped out of the ground, only to be thrown down on top of homes. According to PowerOutage.us, roughly 8,000 people are without power in Mississippi, along with 12,000 in Louisiana.

Here's a look at some of the damage caused by a possible tornado in the Hinds County town of Edwards. Photos courtesy of MEMA Drone Support. #mswx pic.twitter.com/xIaVnD0wU0

More tornado damage from the tornado that just passed near Bogue Chitto, MS. This is off Bogue Chitto rd SW about 2 miles W of I-55. #mswx pic.twitter.com/duQr878Q22

​The tornado watch area was expanded eastward Monday afternoon to include western portions of Alabama.

The #severe weather threat continues late this afternoon into the evening hours across the South, as a strong cold front pushes through the region. #Tornado watches are in effect from southern Tennessee through Alabama and Mississippi into southwestern Louisiana. #tornadosafety pic.twitter.com/caD2oCxmAu

At least one large tornado has been spotted in Alabama, which passed through Marion County in the state's west.

We're is starting to see videos of the tornado that passed through Marion County a short while ago. (Video credit: Claire Billingsley)

​Hail of at least 2 inches in diameter was reported near Monticello, Mississippi, alongside another tornado warning.

The storms also produced a great deal of lightning, putting on an incredible show for those lucky enough to be out of a twister's path.

​In one shocking video posted on Twitter, user Blake Ivy filmed the chaos outside their house in Guntown in northern Mississippi as a tornado passed close by.

Another tornado was spotted in Columbia, in the state's south.

Just got this picture from my hometown (Columbia, MS). I hope everyone is safe with minimal damage. pic.twitter.com/NmlRwIdrgj

​​The SPC has predicted the storms will die out overnight, as the new weather system moves into the region.