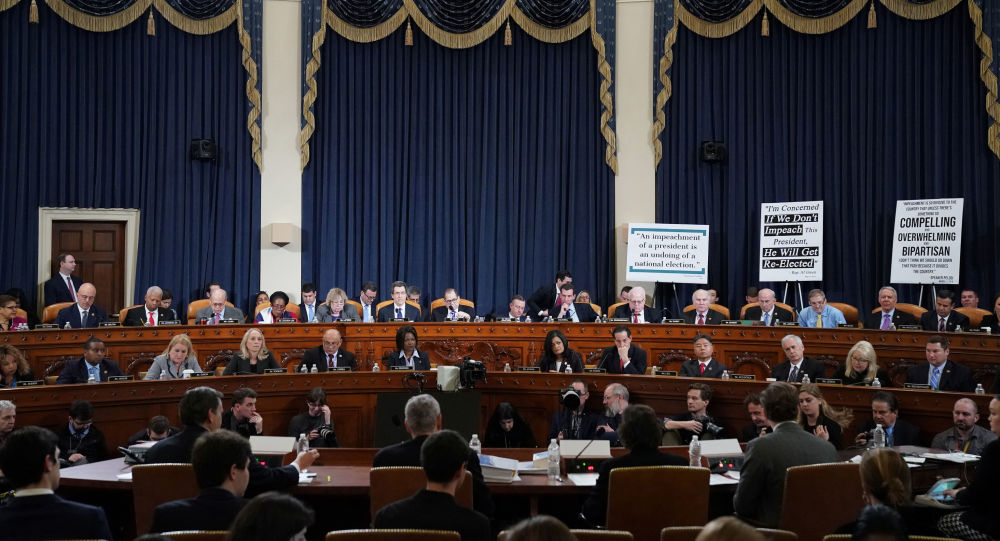 The House Judiciary Committee has over the past few weeks been looking into the constitutional grounds for Trump's impeachment – an ongoing partisan effort by Democrats. The Committee earlier kicked off a series of public hearings, after the Republicans had called for the process to be more transparent.

The House Judiciary Committee released an in-depth impeachment report on Monday morning to accompany the articles of impeachment against President Donald Trump that are scheduled to be up for vote on Monday.

The 658-page document outlines the decision to charge Trump with two articles - abuse of power and obstruction of justice - and also includes reports from the House Intelligence Committee, which was the first institution to look into the issue, with the Judiciary Committee due to explain the constitutional grounds for the move.

"Taken together, the articles charge that President Trump has placed his personal, political interests above our national security, our free and fair elections and our systems of checks and balances. He has engaged in a pattern of misconduct that will continue if left unchecked", the Judiciary Committee explains. "Accordingly, President Trump should be impeached and removed from office".

The report is one of the steps needed as the House is due to consider the two articles of impeachment. The House Rules Committee will also take up the articles to set the rules for the floor debate in a Tuesday hearing.

Separately, the report details the proceedings by the two committees involved, arguing they were a fair process that welcomed the president to partake, even if he chose not to.

Republicans, for their part, accused Democrats of spearheading an unfair process that failed to conclude in any way that the president had committed anything impeachable.

"Before the House of Representatives are two Articles of Impeachment against the President of the United States, Donald John Trump. To these Articles, the minority dissents", wrote Rep. Doug Collins of Georgia, the top Republican on the Judiciary Committee.

"The majority's actions are unprecedented, unjustifiable and will only dilute the significance of the dire recourse that is impeachment. The ramifications for future presidents are not difficult to surmise".

House Intelligence Committee Republicans came up with their own report that was issued along with the Democratic report when the public hearings in the intelligence panel rounded off.

The Judiciary Committee has conducted open public hearings after the Republicans persistently called for the process to be transparent and easy for President Trump to have his say.

Trump has on multiple occasions blasted the proceedings as "a new round of a witch hunt" aimed to deflect public attention from the ongoing political campaigns and other more burning issues.

He stressed that a July call with Ukrainian counterpart Volodymyr Zelensky, which underlies a whistleblower complaint and hence the impeachment inquiry, was absolutely benign - something Zelensky has confirmed.

During their conversation in summer, the two brought up former Vice President and Trump's current Democratic rival Joe Biden and his son Hunter, who was employed by a Ukrainian gas firm as a member of its board, with POTUS asking to pay attention to the Bidens' alleged involvement in a corruption scheme.