Rep. Rashida Tlaib appeared to blame the Jersey City shooting on “white supremacy” Thursday - even though the attackers have been identified as members of an extremist “anti-white and anti-Semitic” movement.

The Democratic congresswoman retweeted a photo of one of the victims of Tuesday’s shooting, 24-year-old Moshe Deutsch, an Orthodox Jew, captioned: “This is heartbreaking. White Supremacy Kills.” 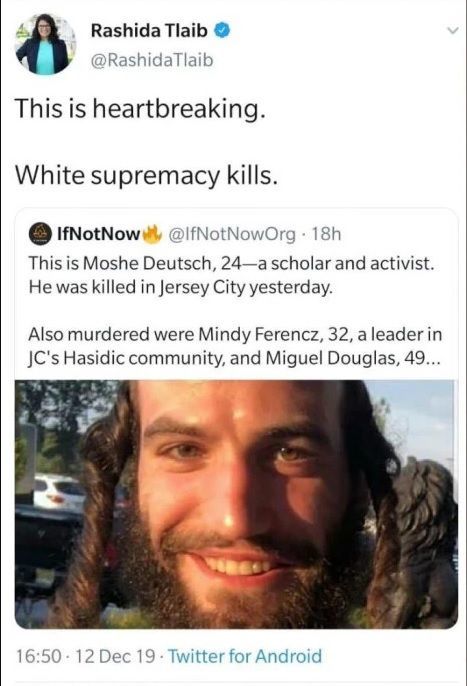 However, the shooters – David Anderson and Francine Graham – were followers of the Black Hebrew Israelites, a fringe religious movement not affiliated with mainstream Judaism. Both suspects were African-American.

The tweet, which was posted to her personal account, had been deleted since Thursday afternoon. Asked by the New York Post about the congresswoman’s reaction, Tlaib’s spokesman pointed at her official account which reads: “It was beyond heartbreaking to learn of what appears to be another anti-Semitic act of violence. The hate growing in our country is toxic. We must do so much more to fight it and stem the tide of gun violence. My love goes out to the victims, the first responders, their families, and the community of #JerseyCity.”