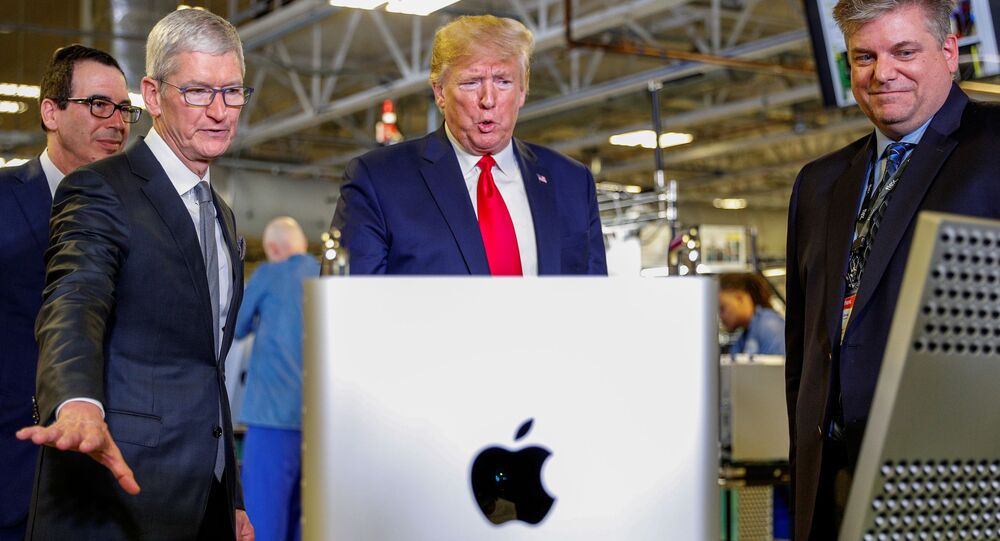 POTUS’s visit to the computer factory came on Wednesday as part of a White House social initiative aimed at boosting US workers’ well-being and closely followed crucial testimony in Congress by US Ambassador to the European Union Gordon Sondland – something “fantastic", as President Trump contended.

As Austin police told the Austin American-Statesman, the Flextronics premises on Riata Trace Parkway saw around 200 Trump supporters gathered there, along with 150 anti-POTUS protesters.

The latter held signs calling to “lock him up” and “impeach”:

"Our main focus is impeachment. Ambassador [Gordon] Sondland testified just this morning that there was a quid pro quo", a group called Indivisible Austin said in a press release, going on to say:

“Trump is trying to distract us with a shiny APPLE when he should be imPEACHed".

The anti-impeachment group countered the rhetoric with: “four more years", and held signs that read “women for Trump” and “Make America Great Again".

“Today I opened a major Apple Manufacturing plant in Texas that will bring high paying jobs back to America. Today Nancy Pelosi closed Congress because she doesn’t care about American Workers!” POTUS tweeted, while Ivanka remarked on Twitter that Apple was one of the first signatories to the White-House-led “Pledge to America’s Workers” that she is currently working on.

.@Apple, one of the early signers of our #PledgetoAmericasWorkers, supports 2.4 Million jobs across ALL 50 states. Tomorrow @POTUS & CEO Tim Cook will be visiting one of Apple’s major expansions at a new manufacturing site in Austin, TX. Looking forward! https://t.co/Ihf8FcqrC2

The visit by the Trumps received broad coverage on Twitter with reactions ranging from irony over the “opening” of a plant that has actually been running since 2013 to enthusiastic lulz and memes. Many suggested it distinctly “smelled like Trump” in Austin on Wednesday.

Trump is in Austin ... I smell cheese puffs pic.twitter.com/0MpLIJqZE8

If anyone in Austin notices a strong funky smell mixed with a hint of KFC chicken, don't be alarmed. It's just Trump

One seemed to be more inclined to pose questions than share reactions, with another cheekily suggesting that POTUS’s mind  is “a murky place” and that he perhaps thought it was 2013 when he made the statement.

Why is Trump taking credit for an Apple plant opening in Austin that had already opened in 2013?

Why did Ivanka and his doctor accompany him on this trip?

@realDonaldTrump 's mind is a murky place, he probably thought it was 2013 when he made the statement.

Ivanka and his doctor accompany him on this trip to continue his PARTIAL YEARLY PHYSICAL,... or start him up if his ticker stops all of a sudden ! 😆😂😂😂😂

Plant name is Flex. Apple breaking ground for school in Austin. Flex plant did open in 2013.
This guy again lies and lies.

A second recounted that the one who was 6 years late to make the announcement “can’t even open an umbrella".

So it was Obama all along...

Another zeroed in on the fact that Trump’s physician, as well as his “caretaker” Ivanka,  were accompanying him in Austin.

Why isn’t it being reported that Trump’s physician has traveled with him to Austin?@Goss30Goss @briantylercohen #TrumpInATX pic.twitter.com/gtGn6FoekJ

And I see he has his caretaker Ivanka with him.

…while one commenter in the thread joked it was because Trump is “agent orange", so that they have to make sure he “doesn’t poison the water supply".

“Trump’s claim that he opened an Apple manufacturing plant in Austin today (open at least since 2013) is as senseless as his apparent claim that Congress was closed today", another suggested in a reference to POTUS’s earlier remarks.

After praising the manufacturing plant and America's “strongest economy in the world” in Apple CEO Tim Cook’s footsteps, the president then addressed questions about US Ambassador to the European Union Gordon Sondland's testimony in the presidential impeachment hearings.

The president called it "fantastic" and a reason to put a full stop to his impeachment hearings. He read his notes recounting a conversation with Sondland in which he shared with the ambassador, "I want nothing, I want no quid pro quo".

Although Sondland’s testimony in the ongoing proceedings, kickstarted back in late September, and was assumed to be potentially damning for POTUS, it happened to fall short of expectations.

"Mr Giuliani’s requests were a quid pro quo for arranging a White House visit for President Zelensky", Sondland told the US House of Representatives Intelligence Committee on Wednesday, adding further:

The partisan investigation into Trump and alleged abuse of power over his July phone call with Ukrainian counterpart Volodymyr Zelensky was announced on 24 September in the wake of an anonymous complaint, with testimony being given behind closed doors until last week. While House Democrats continue to press with impeachment calls, Republicans argue that the claims are politically motivated, insisting no impeachable offence was in any way committed during an "absolutely benign" conversation with Zelensky.

Trump Says US ‘Looking Into’ Exemptions for Apple on China Tariffs