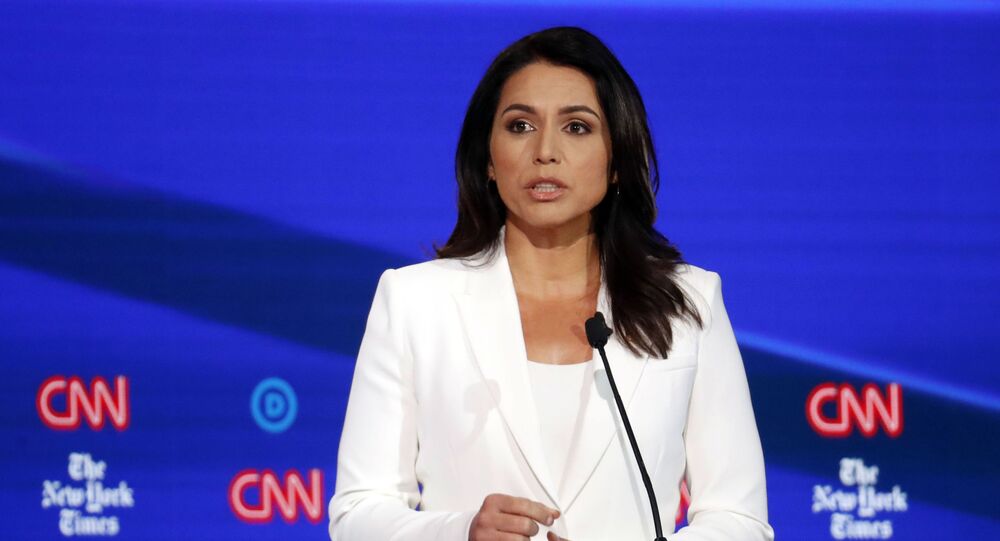 Lawyers for 2020 presidential candidate Tulsi Gabbard on Monday fired off a letter to representatives of failed 2016 presidential nominee Hillary Clinton, demanding that the Chicago-born politician “verbally retract” recent statements that suggested Gabbard was being “groomed” as a third-party candidate.

During an hour-long segment, Clinton spoke on the current political climate, which included her making remarks which initially implied that Gabbard was a third-party candidate in the 2020 race.

​“Your statement is defamatory, and we demand that you retract it immediately. The statement is false. Congresswoman Gabbard is not being groomed by Russia to be a third-party candidate. Nor is she a Russian asset,” reads the letter sent by Gabbard’s lawyers. “Rather, she is a patriotic loyal American, a sitting four-term United States Congresswoman and a Major in the United States Army National Guard.”

“It appears you may now be claiming that this statement is about Republicans (not Russians) grooming Gabbard. But this makes no sense in light of what you actually said. After you made the statement linking Congresswoman Gabbard to the Russians, you (through your spokesman) doubled down on it with the Russian nesting dolls remark.”

When Clinton’s camp was asked by CNN to confirm whether the politician was suggesting that Gabbard was tied to the Russians, spokesperson Nick Merrill stated, “If the nesting doll fits,” before stressing that Clinton’s remarks were “not some outlandish claim.”

It should be noted that it was later clarified that Clinton was actually saying that the Republican Party - not “the Russians” - was grooming a third-party candidate for the 2020 election. A correction included in the New York Times’ reporting of the podcast remarks explained that the grooming comment “was in response to a question about the Republicans’ strategy, not about Russian intervention.”

However, the explanation has not done much to squash the Gabbard campaign’s outrage. The letter issued by the Hawaii representative’s lawyers goes on to note that Clinton's “Republicans-not-Russians spin developed only after you realized the defamatory nature of your statement, and therefore your legal liability, as well as the full extent of the public backlash against your statement.”

“In making the statement, you knew it was false. Congresswoman Gabbard is not a Russian asset and is not being groomed by Russia. … Besides your statement, no law enforcement or intelligence agencies have claimed, much less presented any evidence, that Congresswoman Gabbard is a Russian asset. This fabricated story is so facially improbable that it is actionable as defamation.”

The letter concludes with the lawyers demanding that Clinton hold a press conference to “verbally retract - in full - your comments,” and that an official apology pre-written by the Gabbard team be shared on Clinton’s official Twitter account and sent to CNN, Fox News  and MSNBC, among other news outlets.

The latest development between the Clinton and Gabbard camps comes weeks after Gabbard took to Twitter and referred to the 2016 nominee as the “queen of warmongers, embodiment of corruption, and personification of the rot that has sickened the Democratic Party for so long.” More recently, Gabbard appeared on ABC’s “The View” to defend herself against Clinton’s claims.