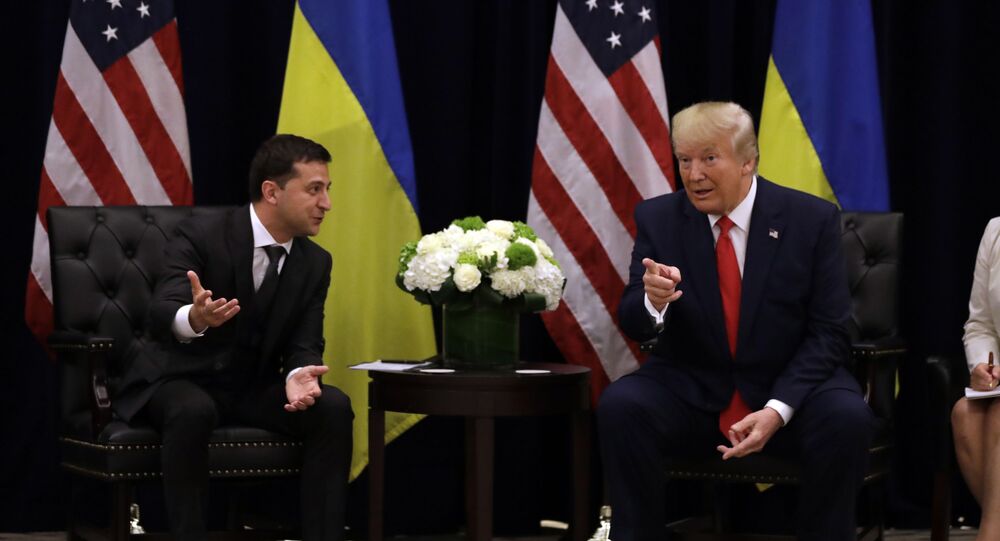 Donald Trump has floated an unconfirmed theory in the past that Ukraine hacked the DNC servers in 2016 and framed Russia for election interference. In the summer of this year, he asked Ukrainian President Zelensky to look into those allegations, which are now at the centre of the impeachment inquiry.

US President Donald Trump has had a disdain for Ukraine since his early days in office, the Washington Post reports citing behind-closed-door depositions of and interviews with US officials.

It is understood that the reason was Trump’s assumption that Ukraine had worked together with the Democrats to damage his chances in the 2016 presidential campaign.

As per the report, the theme at the heart of multiple congressional testimonies in the ongoing impeachment inquiry was “Trump’s unyielding loathing of Ukraine, which dates to his earliest days in the White House.”

Some aides allegedly argued that Trump viewed Ukraine as an “impediment” to better relations with Russian President Vladi­mir Putin. US relations with Russia have deteriorated after the Crimean peninsula voted to secede from Ukraine and join Russia following a US-backed uprising in the early months of 2014.

No Need to Anger Russia

Donald Trump is said to have been in conflict with his own security advisers throughout 2017 over whether to sell anti-tank weapons to the civil war-ravaged Ukraine – something his predecessor Barack Obama opposed.

Trump “kept saying it . . . wasn’t worth p***ing off Russia and what a bad country Ukraine was,” a former senior White House official told the Washington Post. The US president, however, still went ahead with the sale later that year.

This was when President Poroshenko was in office, and US diplomats have allegedly sought a meeting between Trump and Ukraine’s new president, Zelensky, to change that attitude. The two presidents got to see each other face-to-face in September, when Zelensky visited the United States.

This is when, former special adviser on Ukraine Kurt Volker was quoted as telling Congress, Trump learned that Zelensky is a “charismatic politician who enjoys the support of his people and is worthy of US support.”

For this meeting to take place, they reportedly encouraged their Ukrainian counterparts to take heed of Trump’s demands to open investigations into Joe Biden’s family and the DNC hack.

The Democrat-controlled lower house of Congress opened an impeachment inquiry into Donald Trump in September over concerns that he may have solicited Ukraine’s interference to help him win in the 2020 election.

The inquiry revolves around his July phone call with Zelensky; according to a rough transcript of the conversation, Trump asked Zelensky to “look into” whether former Vice-President Joe Biden blocked an investigation into a Ukrainian company that had employed his son. At the time, Joe Biden was the top-polling 2020 Democratic candidate.

Trump doesn't deny his plea — he was the one who ordered the release of the transcript, in the end — but insists that it didn't constitute any wrongdoing.

Trump also asked Zelensky to investigate the activities of the American cybersecurity company CrowdStrike in Ukraine. It was among the three firms that probed the 2016 hacks of the Democratic National Committee – the governing body of the US Democratic Party – and attributed those attacks to Russian intelligence services.

While the Kremlin repeatedly rejected any role in those attacks (WikiLeaks, which disclosed the documents, also said they didn’t come from Russia), a widespread conspiracy theory suggested that it was Ukraine that actually interfered to benefit Hillary Clinton.

The theory goes that CrowdStrike – which was co-founded by Ukrainian businessman Dmitri Alperovitch – had planted evidence on the DNC server to cover up Ukraine's role and frame Russia, while asserting that the DNC did not provide the FBI with access to its servers in a bid to conceal the plot. The FBI has debunked those claims, stating it received full access to the forensic information it needed when looking into the hack.

The biggest question before House investigators is whether Donald Trump actually solicited foreign help and whether he pressured Zelensky to open the investigations into the Bidens and CrowdStrike. The Democrats believe he did so because he ordered to withhold planned military aid to Ukraine just a week ahead of the call.

The acting US ambassador to Kiev, Bill Taylor, corroborated this assumption during hearings, while both Trump and Zelensky state the funds weren’t use as leverage.