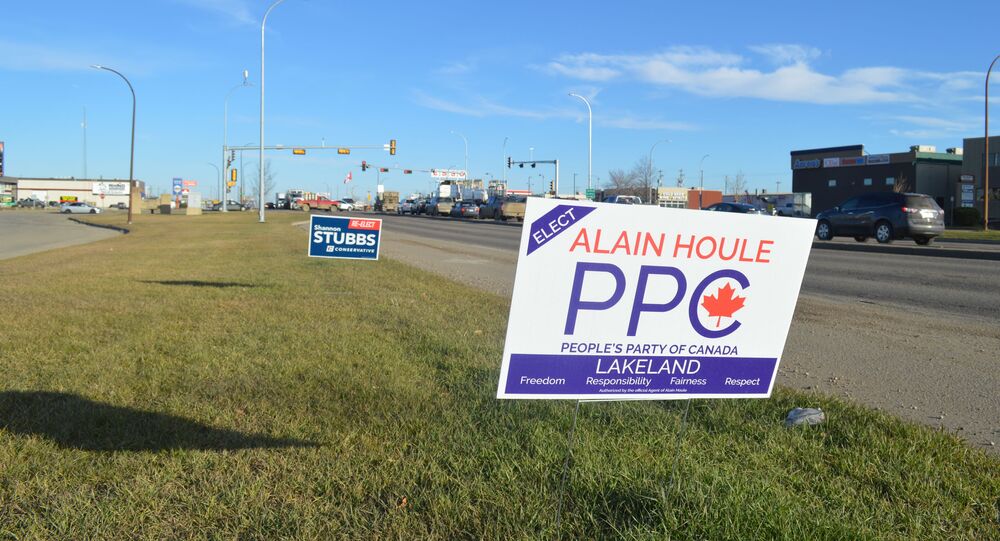 On 21 October voters in Canada’s 338 electoral districts will choose members of the country’s parliament. Sputnik's correspondent went to one of country's three prairie provinces to discuss the campaign with local candidates.

The first thing you would hear if you talk about elections in Canada is the word “riding.” It means “electoral district” and in Canada, ridings can be as large as some European countries. Carlton Trail-Eagle Creek constituency in Saskatchewan is almost the size of Belgium, and during this year’s Federal election it has six candidates competing for a seat in the federal legislature.

Conservative MP Kelly Block, who won the previous election with 64 per cent of the vote, spent a lot of time on the road door-knocking, while also entertaining her Facebook subscribers with local landmark quizzes.

But the campaign in Carlton Trail-Eagle Creek hasn’t been such a scenic ride for Justin Trudeau’s Liberal party candidate Rebecca Malo.

"When I’ve been door-knocking it’s few and far between when I actually meet a fellow liberal," Malo says. "The most common response is either "I’m voting conservative" or they don’t vote at all."

Malo is a university student who campaigned while preparing for her midterm exams and arrived for the Sputnik interview with her mom - also a Trudeau supporter.

The main reason for Malo becoming a liberal candidate is because she personally benefits from programmes introduced by Trudeau’s party.

The Liberal candidate got only 14% of the votes in Malo’s riding during the previous federal election in 2015, and there is no indication that there will be a breakthrough this time.

The 2019 campaign is also marked by the appearance of a powerful new player in Canada’s politics. Last year former Conservative politician Maxime Bernier formed the People’s Party of Canada (PPC), which has been gaining a lot of support across the nation. The party, which hasn't been well received by the government-sponsored mainstream media, has relied heavily on social networks in its campaign, facing fierce competition from both the liberals and the conservatives.

“The conservatives didn’t expect us to grow to even where we’re now,” says People’s Party candidate Cody Payant. “They didn’t expect us to be in the debates. I think other parties are scared. They don’t know what to do, they weren’t prepared to debate us.”

Payant is an accountant from Saskatoon – Saskatchewan’s fastest-growing urban community. The part of the city where he lives is known for voting liberal, but Payant is not afraid to engage in discussions with his political opponents and says that he often receives positive comments when people in the street see his PPC hat.

This is the first federal campaign for Payant, but he says he’s a lot receiving a lot of positive feedback from Saskatchewan voters who are sending hundreds of emails and Facebook messages to him.

In 2015 the Conservatives were followed closely in the Carlton Trail-Eagle Creek district by the New Democratic Party. Former NDP candidate Glenn Wright, who received 18% of votes in the previous election and came in second, is now running a public interest campaign independently, saying that he’s “calling out the structural problems with [Canada’s] democracy.”

“Our government is captured by corporate interests - often the same corporate actors donate to both of the two major parties so that they can exercise strong influence no matter who wins,” Wright wrote in a statement received by Sputnik. “Enough is enough. My message in this campaign highlights the need to reform our politics, we must end first past the post, and we need proportional representation. Only through cooperation and compromise will we enact good policy that benefits all Canadians.”

Since 2015 Prime Minister Justin Trudeau’s Liberal party has had a majority in the House of Commons to the 42nd Canadian parliament, which was dissolved in September this year.

Key players, besides the Liberals and Conservatives, are the New Democratic Party, the Green Party and the Bloc Québécois.

The 21 October vote will be overseen by Elections Canada – the country’s office of the Chief Electoral Officer, a non-government agency.

There were calls to move the vote to another date because it fell on Shemini Atzeret – a part of the Jewish holiday Sukkot, but authorities refused to reschedule the election.

Candidates representing the NDP and CPC in Saskatchewan’s Carlton Trail-Eagle Creek riding did not reply to Sputnik’s requests for comments at the time of publication.