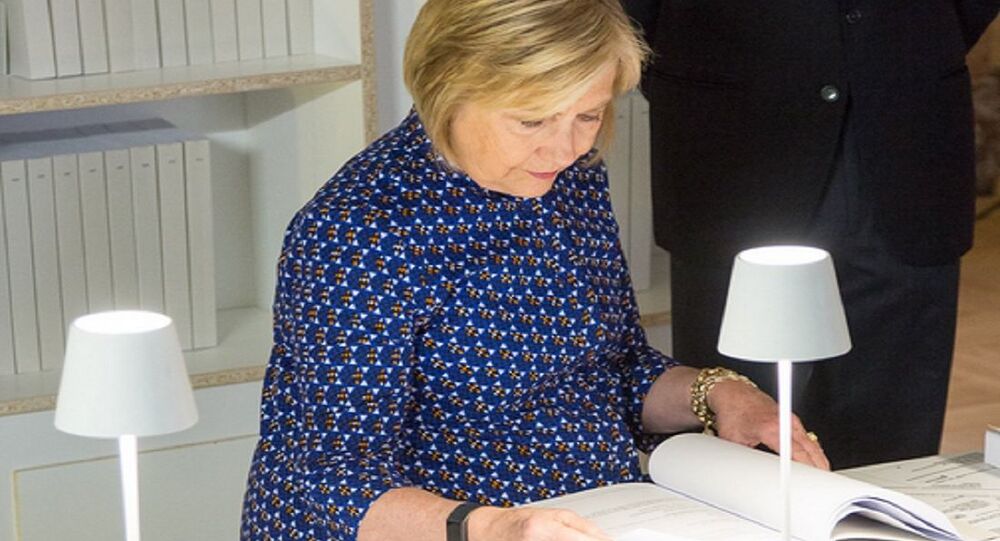 The former Democratic secretary of state has tied Trump’s call to Ukrainian President Volodymyr Zelensky to the recent Russia collusion allegations, utterly debunked by Special Counsel Robert Mueller this past July. POTUS meanwhile has confirmed there was a call to Zelensky, stressing it was absolutely "appropriate".

Hillary Clinton tweeted Friday that Trump was "again" asking a foreign country for a favour to  "help him win an election", responding to a report that the POTUS asked Ukrainian President Volodymyr Zelensky in a July call to investigate Hunter Biden, the son of the Democratic primary front-runner and former Vice President Joe Biden, over allegations of corruption.

The president asked a foreign power to help him win an election.

The Wall Street Journal published a report Friday citing a source that suggested Trump had pressed Zelensky at least eight times during the phone call to probe Hunter, who was on the board of directors of a large Ukrainian oil company, and even offered his personal lawyer Rudy Giuliani’s services.

The source cited POTUS as stressing that people in Washington "wanted to know" whether accusations of corruption against the younger Biden were true, dismissing initial claims that there was some quid-pro-quo arrangement - supposed military aid in exchange for the probe on Hunter.

On Friday morning, Trump commented on the report, arguing defiantly that his call two months ago with Zelensky was "totally appropriate", although he didn’t specify what exactly they talked about.

Friday evening, The Washington Post reported that the conversation was the subject of an undisclosed whistleblower complaint filed last month by an unnamed US intelligence official alleging Trump made an inappropriate promise to a foreign leader, which was dismissed by the WSJ source. The Trump administration has blocked Congressional viewing of the complaint, with Trump referring to it as “just another political hack job". He also remarked that the statement by the whistleblower was "highly partisan".

"It doesn’t matter what I discussed", he told reporters in the Oval Office, "but I will say this: Somebody ought to look into Joe Biden's statement, because it was disgraceful, where he talked about billions of dollars that he's not giving to a certain country unless a certain prosecutor is taken off the case. So somebody ought to look into that".

Trump thereby brought up an incident from 2016, when then-Vice President Biden threatened during a trip to Kiev that he would suppress loans to Ukraine if the country’s leadership failed to fire the country’s prosecutor general over corruption allegations centering around him. At the time, the general prosecutor’s office was targeting a Ukrainian oligarch, who owned the company where Hunter Biden held a high-ranking position.

In the aforementioned tweet, Clinton, Trump’s Democratic rival in 2016 and a constant critic of POTUS, implied a comparison with the Russia collusion allegations from the not so distant past and the Special Counsel’s investigation, branded "a witch hunt" by Trump.

After two years of in-depth work on the subject, Counsel Robert Mueller busted the Democrats' long-held hypothesis of collusion, concluding this summer in a lengthy report that there was no evidence to allege Trump or his campaign aides colluded with Russia to influence the outcome of the 2016 presidential vote, in which Trump beat Clinton via the US Electoral College.

The latter, a former first lady, then an ex-secretary of state and a senator, blamed a lengthy list of external factors, including the Dems’ favourite rhetoric of Trump’s alleged Kremlin ties, for her defeat.