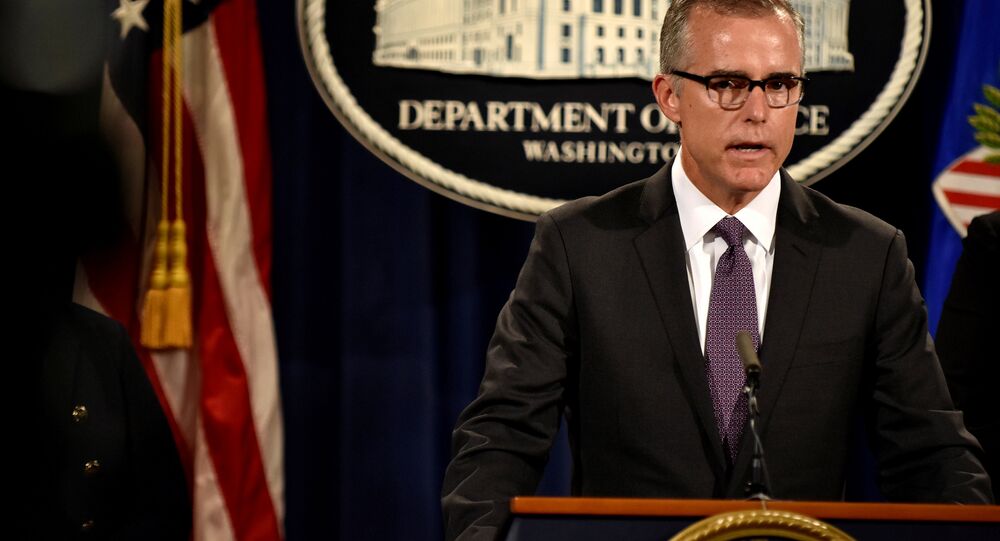 A US federal judge rejected an appeal by former acting FBI Director Andrew McCabe that sought to block future charges against him, paving the way for his indictment.

McCabe, who was fired in March 2018 hours before he was due to retire, has failed to stop the US Department of Justice from bringing charges against him for the causes of his discharge: his October 2016 disclosure to the Wall Street Journal that a bureau investigation into Democratic presidential candidate Hillary Clinton had been opened and his later “lack of candor” about the disclosure during an internal bureau review.

A source close to McCabe’s legal team told reporters they’d received an email Thursday from the DOJ informing them that Deputy Attorney General Jeffrey Rosen had rejected their appeal.

“Any further inquiries should be directed to the United States Attorney’s Office,” the email said, according to Fox News.

The news follows reports last week that a federal grand jury responsible for investigating the case against the former FBI director had reconvened after a months-long hiatus. While this likely signals it could soon bring charges against him, the panel reportedly left without “immediate signs” it had done so, the Washington Post reported, noting it might have filed a determination under seal.

McCabe was acting FBI director from when US President Donald Trump fired James Comey in May 2017 until he appointed Christopher Wray to the bureau’s top spot that August. During that time, which saw the appointment of Robert Mueller as special counsel, launching the Russiagate investigation, McCabe joined several other Trump administration leaders to explore the possibility of legally removing the president from office. Nothing became of the plan, which ended eight days after Comey’s unexpected firing, when Trump appointed Mueller.

McCabe was then fired himself by then Attorney General Jeff Sessions on March 17, 2018, just over 24 hours before he was set to retire, denying him the ability to collect a full pension for his 21 years in the law enforcement bureau. Last month, he filed a suit seeking that lost cash, arguing he was wrongfully terminated as part of a political dispute.

The DOJ Inspector General’s report that led to his firing found him responsible for divulging information to WSJ reporter Devlin Barrett about a bureau probe into the improper storage of Clinton’s emails, especially their appearance on the personal laptop of former Democratic Rep. Anthony Weiner, who at the time was married to Clinton aide Huma Abedin. The resulting story broke just days before the 2016 US presidential election and was seen by Democrats as seriously endangering Clinton’s chances of beating Trump. While Clinton received 3 million more votes than Trump, she lost in the Electoral College count, and Trump became the 45th US president.

The IG report concluded McCabe acted improperly by leaking the information as well as when he later told Comey, then his boss as FBI chief, that he had not authorized the disclosure and didn’t know who did.

McCabe was hired as a political commentator by CNN last month.

Andrew McCabe: The Politics of an Attempted FBI Coup