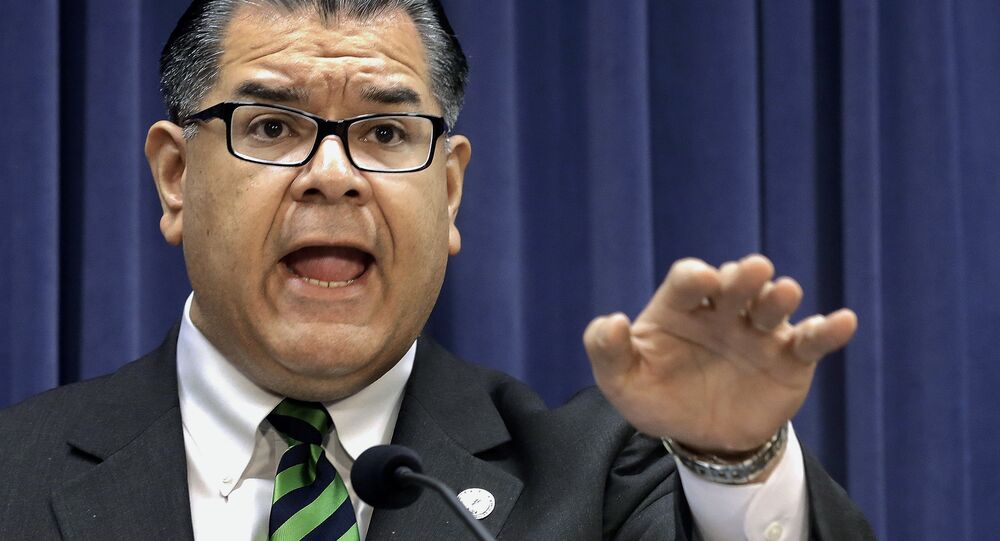 Illinois Democratic State Senator Martin Sandoval has apologized after a number of photos showing two men acting out an assassination of US President Donald Trump were taken at his campaign event.

A political fundraiser for @SenatorSandoval simulates an assassination attempt against a mock @realDonaldTrump decked out in Mexican garb. Looks like a man pointed a fake assault weapon at the fake President to pose for a picture. pic.twitter.com/MlT9zjB1mn

It’s not known whether Sandoval had prior knowledge of the display.

Though he himself did not participate in the photo, the state senator found himself and his golfing event the targets of bipartisan ire after being tagged in the mock assassination images. The lawmaker was also called out by Trump’s head counsel Kellyanne Conway for being photographed with the donor who pointed the weapon.

“As our nation grapples with the epidemic of gun violence, purposely pointing a fake gun at anyone is insensitive and wrong,” Illinois Governor J.B. Pritzker, also a Democrat, told local news outlet WCIA Saturday night. “I condemn actions like the ones displayed in the pictures because they lack the civility our politics demands.”

Maura Possley, a spokesperson for the Democratic Party of Illinois, issued a statement Saturday and labeled the display “unacceptable and dangerous.”

“The tragedies in El Paso and Gilroy have demonstrated how hate-filled political rhetoric can fuel violence,” she said. “The place to make our voices heard against Trump is at the ballot box.”

“The incident that took place is unacceptable,” Sandoval said in a statement to WCIA. “I don’t condone violence toward the President or anyone else. I apologize that something like this happened at my event.”

In response, Illinois Republican Party Chairman Tim Schneider’s spokesperson told the outlet that the lawmaker’s apology came “too little, too late,” because “dangerous imagery like this will be condemned and seen as inappropriate by people of sound mind; however, a mentally unstable individual who wants to harm President Trump might find them as an inspiration.”

The mock assassination also drew comparisons to lynching imagery that was displayed during US President Barack Obama’s campaign and time in office.

Despite the social media outcry, Sandoval has not mentioned any intention of resigning.