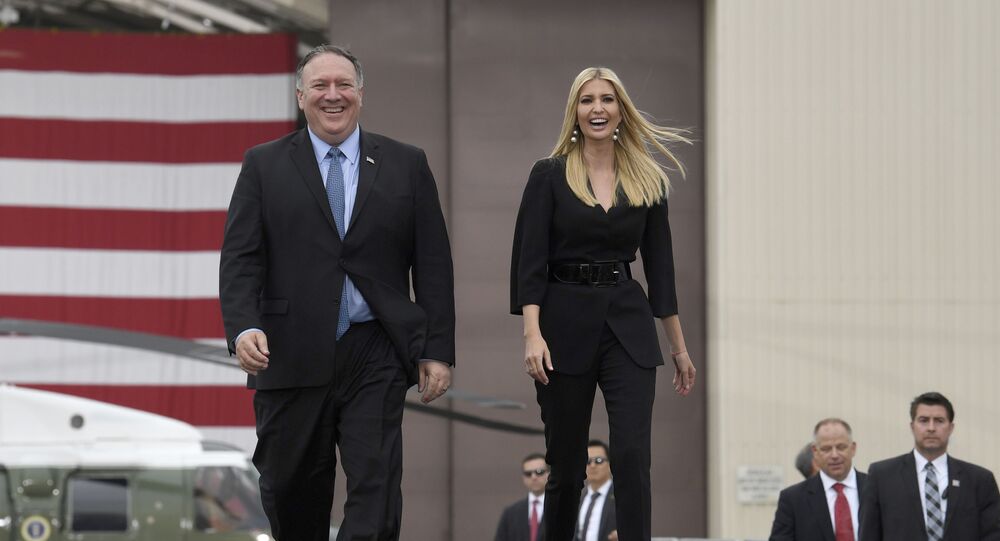 US President Donald Trump has been widely criticised for feeding the political ambitions of his daughter Ivanka; the former businesswoman and current presidential adviser has been increasingly involved in the country's policy-making.

Donald Trump has once again demonstrated his fondness for nicknames, by comparing his beloved daughter Ivanka and US Secretary of State Mike Pompeo to characters from the well-known fairy tale "Beauty and the Beast".

"Mike, come up here Mike. And you know who else we have here? Has anyone ever heard of Ivanka? Alright come up Ivanka. Come on. She's going to steal the show. What a beautiful couple — Mike — Beauty and the Beast", he said as he introduced them while addressing a gathering of Air Force personnel at Osan Air Base in Pyeongtaek, South Korea.

Trump to Mike Pompeo & Ivanka approaching the podium together:

“what a beautiful couple! beauty and the beast”! pic.twitter.com/b4T9TV8CXN

While both Ivanka and Mike were seemingly able to take a joke, as they smilingly walked onto the podium to the cheers from the crowd, social media users have since been torn on Trump's sharp-witted remark.

Trump welcomes Mike Pompeo and Ivanka to the stage: "Mike Pompeo is here, where’s Mike?… And you know who else I have? Has anyone ever heard of Ivanka? Alright, come up Ivanka. Come on. She’s going to steal the show. What a beautiful couple ... beauty and the beast.” pic.twitter.com/BG1VyogLcy

The lion's share of netizens didn't appreciate the comment and assumed that Trump, once a real estate tycoon, who used to host The Apprentice, a TV programme, and own the Miss USA beauty pageant, still thought that he was starring in a reality show:

He still thinks this is a reality TV show.

I like Season 3 of this reality show much better than the last two. 🙄

​Others, of course, couldn't help but ask a fair question: who's who?

Which one is the beast?

I don't think Pompeo is beautiful at all.

Beauty and the Beast is a good line

But I struggle to appreciate Pompeii’s beauty

Many Twitterians, meanwhile, heaped praise on POTUS' sense of humour:

Finally a President that is real, not scripted, doesn’t use filler words to talk around a subject/answer. Speaks direct. His actions speak louder then words. Take a lesson politicians.

A sense of humor...the left should try it.

The US first daughter landed in hot water for accompanying Donald Trump on his trip to the G20 summit, held on 28-29 June in Osaka, Japan: for instance, Democratic Congresswoman Alexandria Ocasio-Cortez took to Twitter to voice her opinion, saying that "it may be shocking to some, but being someone's daughter actually isn't a career qualification".

It may be shocking to some, but being someone’s daughter actually isn’t a career qualification.

It hurts our diplomatic standing when the President phones it in & the world moves on.

The US needs our President working the G20. Bringing a qualified diplomat couldn’t hurt either. https://t.co/KCZMXJ8FD9

During the event, Ivanka represented the United States in meetings with heads of state from China, Russia, Japan, India and Australia, and led the American delegation in a special discussion on women's economic empowerment.

Today, President Trump held dynamic and productive meetings with many world leaders to discuss key security and economic issues. It is an honor to be a member of the U.S. delegation during an incredible first day of the #G20OsakaSummit! pic.twitter.com/h9FCZh7LcO