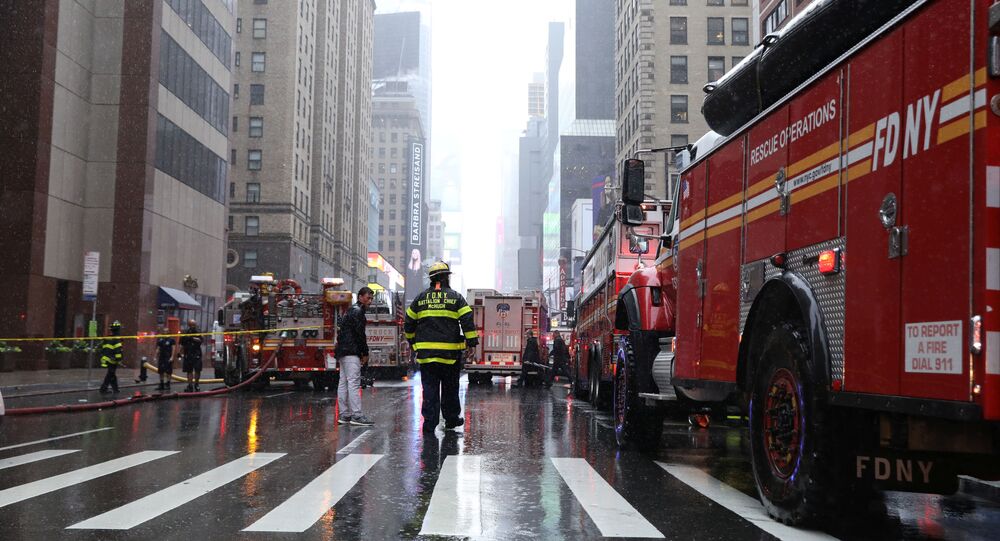 The crash triggered memories of 9/11 along with heightened fears of terrorism, but authorities have confirmed there is no evidence that the crash was intentional.

The helicopter pilot who crashed into the top of a Manhattan office tower on Monday was not qualified to fly in poor weather conditions, officials say.

Tim McCormack was killed when his helicopter crashed into a 54-story building at 787 Seventh Street around 2pm. No other injuries or fatalities were reported.

© REUTERS / BRENDAN MCDERMID
Helicopter Crash Lands Onto Roof of Midtown Manhattan Building, Killing One (VIDEO)
The 58-year old was certified to fly only under specific ‘visual flight’ rules, which require 3 miles of visibility and clear skies in the daytime, according to the Federal Aviation Administration (FAA).

Despite having decades of flight experience, he was not deemed “instrument-rated”, meaning he could not reliably navigate heavy fog and rain.

Shortly after taking off McCormack reported via radio that ‘he did not know where he was’ and had to turn around, a law enforcement official told the New York Times.

The Agusta A109E helicopter hit the building within 11 minutes of takeoff, exploding and bursting into flames just before 1:45 p.m. when he attempted to land on the nearby 54-story ‘AXA Equitable’ centre, which has no helipad. The crash caused an explosion and forced thousands of office workers to evacuate the building.

The building McCormack hit was 750 feet in height, meaning he would have been unable to see below the dense cloud covering 150 feet below him.

New York City Mayor Bill de Blasio quelled concerns at a press conference later the same afternoon, saying “There is no indication at this time that this was an act of terror and there is no ongoing threat to New York City based on the information we have right now. There is no danger of any kind to New Yorkers at this point.”

© REUTERS / BRENDAN MCDERMID
Moment Before Helicopter Crash-Lands in Manhattan Captured in Dramatic VIDEO
The incident has made City Council Speaker Corey Johnson sceptical about the advisability of filling New York’s skies with other aircraft, including delivery drone services as proposed by Uber and Amazon.

The crash is being investigated by The National Transportation Safety Board. Air safety investigator Doug Brazy said a salvage crew is expected to remove the pieces of wreckage from the roof on Tuesday evening. The remnants of the chopper will be moved to a separate location for closer inspection, he said.