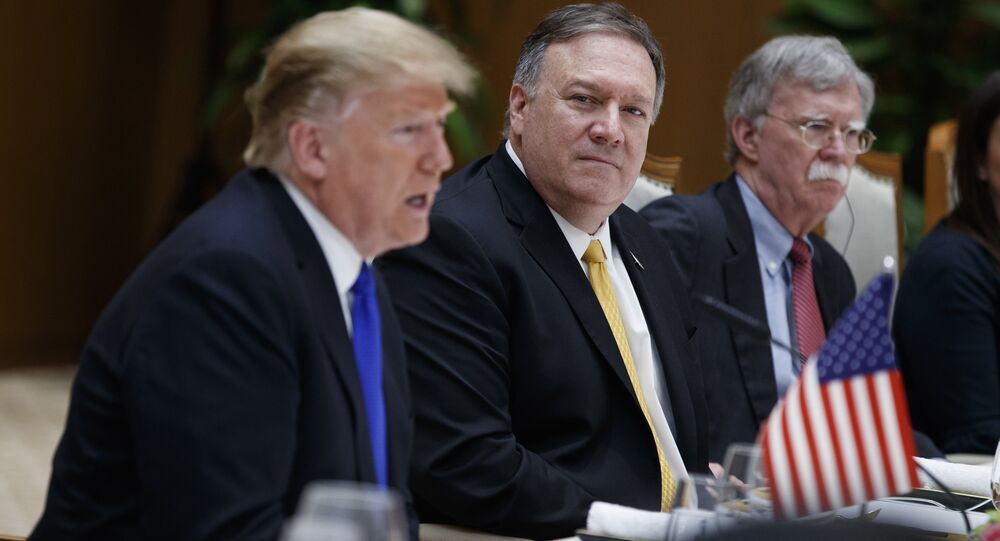 Earlier this week, President Donald Trump reportedly told Defence Secretary Patrick Shanahan that he is unwilling to see the US go to war with Iran as tensions between the two sides show no sign of cooling.

Donald Trump may not need Congress’ go-ahead to launch a war against Iran, something that his advisers “have been quietly building” a case for amid mounting sanctions, NBC News’ Jonathan Allen reports.

The author claims that the plan’s key elements include drawing links between al-Qaeda and Iran to portray the Islamic Republic as a terror threat to the US, “which is exactly what administration officials have been doing in recent weeks".

“That could give Trump the justification he needs to fight Iran under the still-in-effect 2001 use-of-force resolution without congressional approval”, Allen argues, adding that Congress will unlikely grant the US president “new authority to strike Iran under the current circumstances”.

The author’s comments come after the New York Times quoted several unnamed senior US officials as saying that “[President Donald] Trump was firm in saying he did not want a military clash with the Iranians”.

Earlier, Trump was reportedly frustrated with his top advisers over Iran, saying that the hard-line policy pushed by Bolton and Secretary of State Mike Pompeo could lead to the involvement of the US in a military struggle with Tehran, breaking Trump’s campaign pledge to avoid costly foreign wars.

The Washington Post cited an unnamed source as saying that Trump wants to speak with the Iranian leaders and find a diplomatic solution as he is uncomfortable with talks of war with the country and “all this ‘regime change’ talk.”

Iranian Foreign Minister Mohammad Javad Zarif, for his part, voiced hope that a war would not be unleashed in the Middle East as Washington-Tehran tensions persist.

“As Leader of the Islamic Revolution has also announced, we are certain that no war will break out because neither we want a war, nor has anyone the idea or illusion that it can confront Iran in the region”, Zarif said in an interview with the IRNA news agency on Saturday.

His remarks were preceded by Iran’s Supreme Leader Ayatollah Ali Khamenei stressing that “the Iranian nation’s definite option will be resistance in the face of the US” and that “in this confrontation, the US would be forced into a retreat”.

Tensions have been simmering since Trump announced last May the US’ withdrawal from the 2015 Iran nuclear deal with Iran, also known as the Joint Comprehensive Plan of Action (JCPOA), reinstating harsh sanctions against the Islamic Republic.

© Sputnik
False Flag Operation? Are Bolton & Pompeo Pushing War With US and Iran?
The tensions exacerbated earlier this month, when the US imposed more anti-Iranian sanctions and sent an aircraft carrier strike group, a squadron of B-52 bombers and Patriot interceptors to the Middle East to grapple with what Washington describes as a threat emanating from Iran.

On 8 May, Tehran announced that it had suspended some of its obligations under the JCPOA, pledging to return to full compliance if the other parties to the deal were able to help solve problems caused by US sanctions.