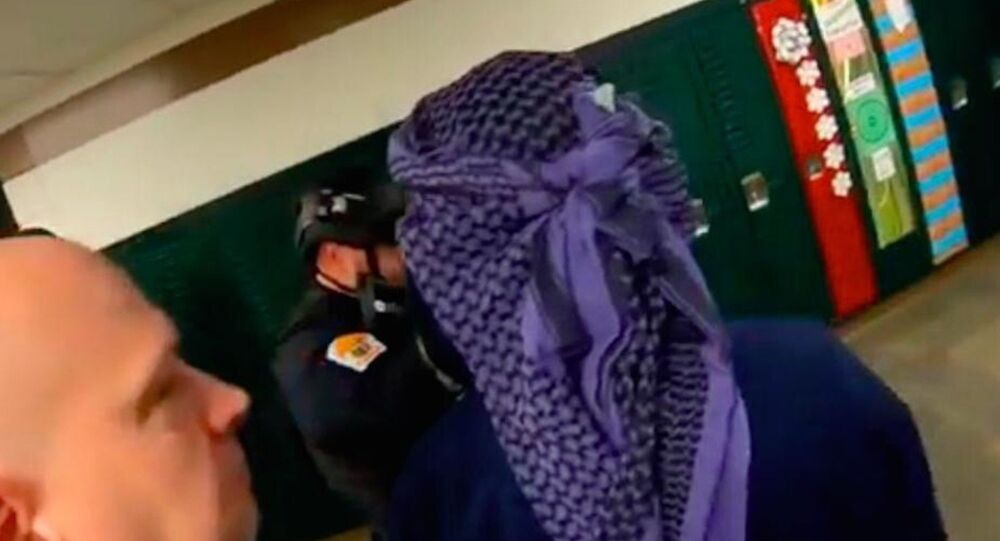 Active shooter drills are a common thing in the United States, where school shootings have been an unsettling trend, but one such event in Pennsylvania stirred strong criticism after it appeared that the mock attacker was made to look like a Muslim.

A Pennsylvania school district is at the centre of a scandal after officials were accused of racial stereotyping during active shooter response training.

Screen captures of a video produced by Penn Trafford School District and circulated on social media this week show the person portraying the attacker wearing what looks like a keffiyeh, an Arab headscarf.

Online activists were quick to kick off a petition, demanding an apology to students and the community from the school district and the police department that helped organise the drill.

"To the extent that the drill was an attempt to prepare staff and others for the possibility of an active shooter, having a member of the staff wear a keffiyeh was incredibly misguided. More importantly, it was racist. It perpetuates the misguided notion that Muslims in the United States are responsible for crimes such as these, when crime statistics prove otherwise," reads the petition.

The Islamic Centre of Pittsburgh, meanwhile, said the portrayal of the shooter as a Muslim was "appalling" and put the local Muslim community "in great harm".

According to a press release by Penn Trafford School District, the drill took place in January and was intended for future staff training but not for publishing.

"As a part of the drill, two teacher volunteers with experience handling firearms, were tasked with the role as active shooters. These volunteers were provided costumes and accessories by the consultant group to alter their appearance so that they were not readily recognisable by their co-workers. There was no intent to represent any particular culture or religion," officials said.

One of the volunteers, they added, donned a paintball mask with a blonde wig and wore the headscarf.

"There was no intent by the District, police department or consultant as part of the training to provide an identity to the volunteers as anything other than an active shooter," says the statement.

A man linked with the drill told the Pittsburgh Tribune-Review newspaper that the "attacker" was going to play in another scenario that was eventually scrapped, and his costume was never approved.