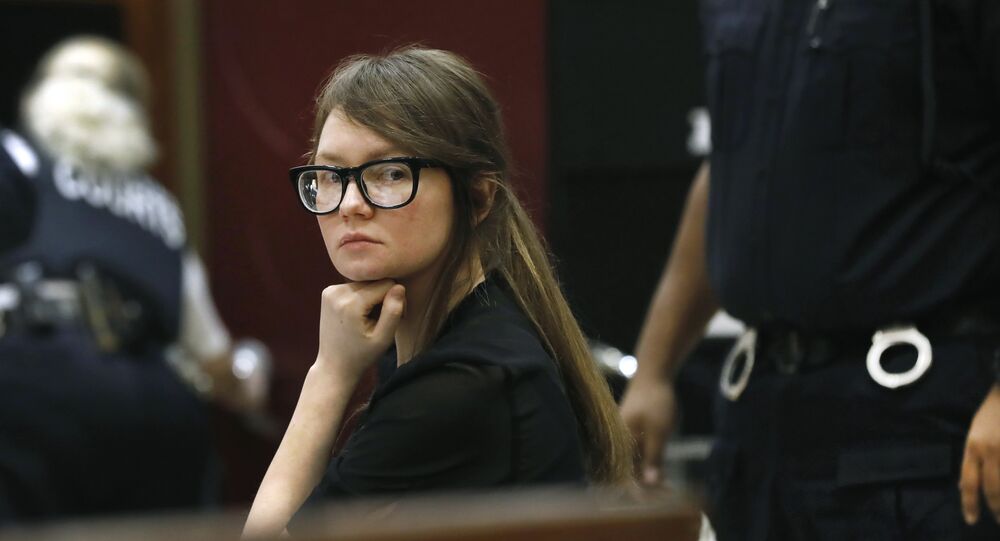 A judge has sentenced Anna Sorokin - who posed as German heiress Anna Delvey in order to infiltrate elite Manhattan social circles - to four to 12 years in prison for defrauding hotels, restaurants, a private jet operator and banks out of over US$200,000.

Judge Diane Kiesel said she was "stunned by the depth of the defendant's deception" and the "labyrinthine lies that kept her con afloat" at the sentencing on 9th May in Manhattan state court. The sentencing followed Sorokin being found guilty in April of grand larceny and theft of services, having stolen over US$200,000.

Nonetheless, the jury did reject some of the charges against her, including a claim she'd attempted to fraudulently obtain a US$22 million loan, and the accusation she'd conned over US$60,000 out of a friend who paid for a lavish trip to Morocco.

​She's been ordered to repay nearly US$200,000 in restitution, in addition to a $24,000 dollar fine. Somewhat ironically, in December 2018 Sorokin rejected a plea deal that would have seen her walk free from prison and be deported back to Germany in early 2019. US Immigration and Customs Enforcement will seek to deport Sorokin following her release from state custody in any event upon her eventual release.

Sorokin, 28 — "blinded by the glitter and glamour of New York City", according to Kiesel — arrived in the US in 2017 posing as an aspiring art collector with a US$60 million trust fund.

However, she eventually became known as the "Soho grifter" due to her dishonest and parasitic behaviour. In particular, she'd rent rooms and eat at restaurants with some of New York's well-known socialites, promising to pay via wire transfer — but the payment would never materialise.

© CC0
Con Artist Swindles Hollywood Hopefuls by Claiming to Be Bigwig Producer
Still, Sorokin managed to get away with her assorted scams scott-free for quite some time, worming her way into major social events in New York and enjoying luxury vacations on her friends' dime. She overdrew a bank account and forged financial records to further the ruse.

She also unsuccessfully attempted to secure several million dollar loans to open an an exclusive members-only arts club, but she did obtain a US$100,000 loan which she splurged on a high-end shopping spree, and various funds from a variety of wealthy collectors, dealers and auctioneers.

During the trial Sorokin frequently threw tantrums, particularly when she wasn't allowed to wear her stylist-curated outfits in court, and drew unflattering sketches of the lead prosecutor during testimony.

Sorokin's story has been a media sensation since New York magazine published a lengthy article on her exploits — How Anna Delvey Tricked New York's Party People — in May 2018. Several other publications followed suit, and a Netflix series about her life is now planned.

Prosecutors said Sorkin's ambition was to "live the fantasy of an extravagant lifestyle beyond her means" — but her legal team argued she was hardly unique in using superficial glamour to present a misleading image of herself.

"Any millennial will tell you it is not uncommon to have delusions of grandeur," lawyer Todd Spodek said.

​However, delusions of grandeur — and the use of fictional ‘status' to penetrate elite social circles — are hardly uncommon in older generations either.

One of the most sinister examples of this phenomenon is Christian Gerhartsreiter, who for three decades conned his way across America under a number of aristocratic aliases, most notably Clark Rockefeller.

Born in Germany in 1961, he travelled to the US in 1978 and enrolled in a class at the University of Wisconsin-Milwaukee. Conning a fellow student into marrying him by convincing her if he returned to Germany he'd have to do national service and be sent to fight in the Cold War, he gained US citizenship in in 1981 — the day after the wedding, Gerhartsreiter left his wife and headed for California.

Using the alias 'Christopher Chichester', he lodged at a home in San Marino, California owned by a woman named Ruth Sohus, infiltrating various social clubs and communities and claiming to be a member of the British aristocracy. In February 1985, Ruth's adopted son Jonathan and his wife Linda disappeared — not long after, 'Chichester' did too. He soon became a 'person of interest' in the investigation of the police's investigation of the couple's disappearance, but by then had established himself in Greenwich, Connecticut, under the name 'Christopher C. Crowe'.

He claimed to be a television producer from Los Angeles who worked on the 1980s remake of Alfred Hitchcock Presents, and worked for a series of finance firms using falsified resumes and the social security number he was using belonged to serial killer David 'Son of Sam' Berkowitz. He disappeared from the area when he discovered police were looking for him in connection with the disappearance of John and Linda Sohus.

© REUTERS / Ibraheem Abu Mustafa
Rockefeller-Funded NGOs Tied to Anti-Israeli Movements Banned in US - Report
He reappeared in New York under the guise of ‘Clark Rockefeller', where he used a vast collection of forged artwork to once again penetrate the upper echelons of US society. Exuding an extremely eccentric and security-conscious personality — which helped explain away his refusal to discuss the specifics of his life-history or personal life. In 1994, Jonathan's bones were found buried in the backyard of his former home, adjacent to the guesthouse where Gerhartsreiter stayed. Forensic analysis showed the victim had been struck in the head two times with a rounded, blunt object then stabbed six times. His body had been cut into three parts.

However, their marriage quickly ran into problems due to Gerhartsreiter's emotionally abusive behaviour. Although Boss earned all the family's income, her husband had complete control of the family's finances and other aspects of her day-to-day life, forcing her to file tax returns as a single person. Later in their marriage, when his wife's firm required a certified public accountant do her taxes, he found an accountant for her — it would later be revealed Gerhartsreiter told the accountant he was her brother so the accountant would continue filing single tax returns for her.

The couple had a daughter, born in 2001, and they moved to Cornish, New Hampshire, where Gerhartsreiter used his supposed family ties to bolster his reputation, telling friends and neighbours he was a wealthy Yale graduate who owned a business in Canada.

Her husband's abuse only intensifying over time, Boss decided to divorce ‘Rockefeller' in 2006. He moved in with friends, claiming to have no money as Boss was taking everything from him in their divorce. During the contentious divorce and custody battle, she hired a private investigator and discovered her husband was not who he claimed to be — major leverage which forced Gerhartsreiter to yield to all her demands, in return for a US$800,000 settlement, two cars, her engagement ring, and three supervised visits with their daughter annually.

During a supervised visitation in July 2008, Gerhartsreiter kidnapped his seven-year-old daughter — he was caught, and she was rescued, by the FBI a mere week later, living in an apartment purchased in the name Charles "Chip" Smith.

On June 12 2009 Gerhartsreiter was found guilty of parental kidnapping and assault and battery with a dangerous weapon, and sentenced to a total of eight years.

In March 2011, he was charged with the murder of Jonathan Sohus, and he was duly convicted of first degree murder on April 10 2013, and sentenced to life imprisonment in August that year. Gerhartsreiter still protests his innocence, and his sentence was reduced on appeal to 26 years to life, meaning with good time credits he'll be eligible for parole in September 2030.