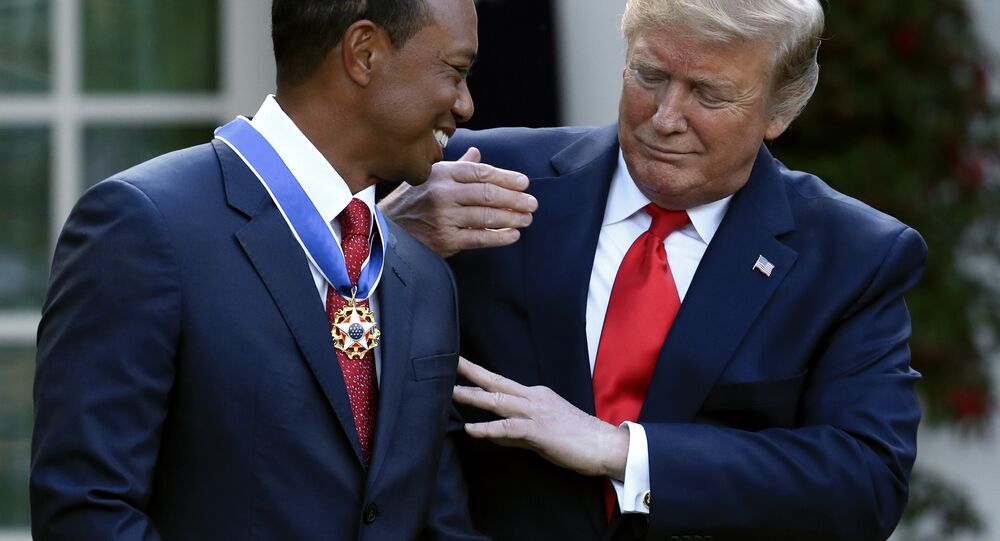 US president Donald Trump went to Twitter in mid-April to congratulate a "really great guy" Tiger Woods on his win in a major golf championship - the Masters Tournament. While praising Wood's "triumph" Trump promised to present the golfer with one of the highest civilian awards of the United States.

The US president awarded Tiger Woods the Presidential Medal of Freedom on Monday during an official ceremony in the White House Rose Garden.

Woods, whose real name is Eldrick Tont, was not only presented with the Presidential Medal but was also named by Trump "a global symbol of American excellence, devotion, and drive."

During the ceremony Trump recalled Tiger's career in details, praising the golfer's "relentless will to win, win, win."

Woods, in his turn, thanked his mother, his two children, his girlfriend, and his caddy, while receiving the award.

Woods became the fourth golfer to receive the Presidential Medal of Freedom. Ex-US president George W. Bush presented the honor to Arnold Palmer and Jack Nicklaus in 2004 and 2005, respectively, a Fox News report says. President Barack Obama gave the Medal of Freedom to Charlie Sifford, the first African-American to join the PGA Tour, in 2014.

© AP Photo /
‘Really Great Guy' Tiger Woods Sees First Masters Win Since 2005
The Presidential Medal of Freedom, which was established by John F. Kennedy in 1963, is bestowed upon those who have made an "especially meritorious" contribution to US security or national interests, world peace, cultural pursuits or other non-specified endeavors, AFP report says.

Trump announced that he would present Woods with the award in the mid-April after the golfer won the Masters Tournament, for the first time since 2005.

Spoke to @TigerWoods to congratulate him on the great victory he had in yesterday’s @TheMasters, & to inform him that because of his incredible Success & Comeback in Sports (Golf) and, more importantly, LIFE, I will be presenting him with the PRESIDENTIAL MEDAL OF FREEDOM!