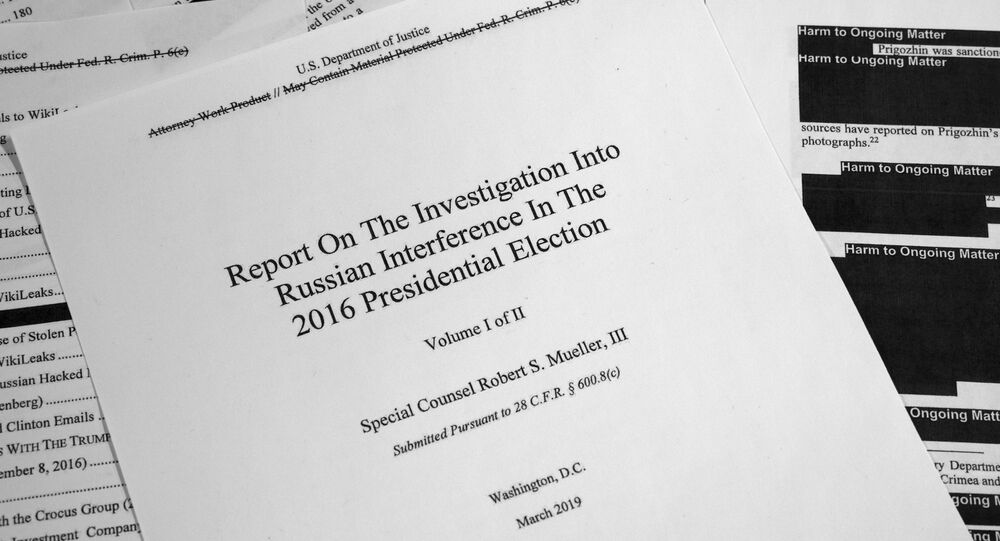 US President Donald Trump tweeted Sunday that special counsel Robert Mueller should not testify before Congress on the findings of his report on alleged Russian election interference despite the US leader telling reporters two days prior that the US attorney general should decide whether a hearing will take place.

"After spending more than $35,000,000 over a two year period, interviewing 500 people, using 18 Trump Hating Angry Democrats & 49 FBI Agents — all culminating in a more than 400 page Report showing NO COLLUSION — why would the Democrats in Congress now need Robert Mueller to testify," Trump tweeted Sunday.

"Are they looking for a redo because they hated seeing the strong NO COLLUSION conclusion? There was no crime, except on the other side (incredibly not covered in the Report), and NO OBSTRUCTION. Bob Mueller should not testify. No redos for the Dems!" he continued.

Just a couple of days ago, on Friday, Trump told reporters at the White House that Barr should be the one to decide whether Mueller will testify before Congress.

"I don't know. That's up to our attorney general, who I think has done a fantastic job," Trump said after being asked about whether Mueller should provide congressional testimony.

Mueller has been under pressure to testify before Congress by Democrats claiming that Attorney General William Barr misrepresented the special counsel's findings.

After last month's release of a redacted version of Mueller's report, Barr said there was no evidence that the Trump campaign conspired with Russia to interfere in the 2016 US presidential election.

The document, however, does detail 10 instances in which Trump himself may have tried to obstruct the investigation, although the president's attempts failed due to US officials refusing to accede to Trump's requests.

On Fox News Sunday, Democratic representative for Rhode Island David Cicilline said that the US House Judiciary Committee is "aiming to bring in Mueller" on May 15 to testify before Congress but "nothing has been agreed to yet."

"The White House has so far indicated they would not interfere with Mr. Mueller's attempts to testify […] We hope that won't change," Cicilline said during his interview with Fox News Sunday.

On Sunday, Senate Minority Leader Chuck Schumer, assuming that Mueller will testify on May 15, said during a news conference, "I heard this morning that Mueller is testifying on the 15th," multiple reports stated.

"I think it's imperative for Mueller to testify. I think the only restraints on what he says is what he thinks he can't say, no one else should impose restraints. We ought to hear the full testimony from Mueller. Given the fact that Barr does not seem to be a neutral observer here, Mueller's testimony is all the more important," he added.

Calls by Democrats to have Mueller testify have increased after it was revealed last week that a letter from Mueller to the attorney general in March suggests that the latter did not properly characterize instances of potential obstruction of justice by Trump in Barr's letter to Congress summarizing the report before it was released to the public.