WASHINGTON (Sputnik) - The office of the sheriff of the US city of Jacksonville, Florida, said on Saturday that 21 people had been hospitalized after a commercial aircraft had slid off into a river in Jacksonville during landing.

"[A total of] 21 adults transported to local hospitals by @JFRDJAX [Jacksonville Fire and Rescue Department]. All listed in good condition, no critical injuries," Jacksonville Sheriff's Office wrote on Twitter.

​NAS Jacksonville confirmed that there had been 143 people on board.

"There were 136 passengers and seven aircrew on board and all have been accounted for. Minor injuries have been reported, treated at the scene, and those requiring additional treatment were transported to a local hospital. There were no fatalities," NAS Jacksonville wrote on Facebook. 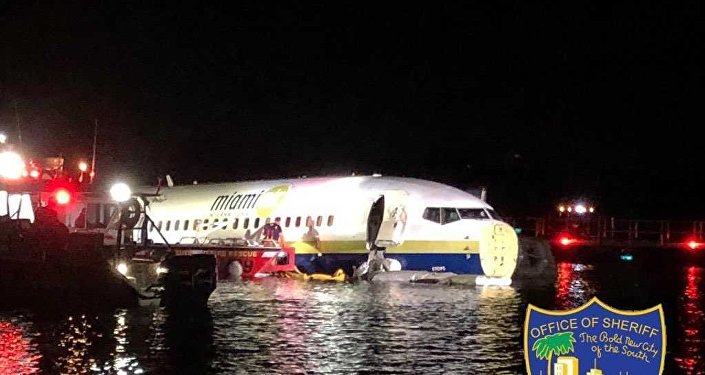 © Photo :
Boeing 737 Jet Goes Into River in Jacksonville, Florida (PHOTO)
At around 9:40 p.m. local time on Friday (01:40 Saturday GMT), a Boeing 737 charter aircraft, with 143 people on board, arriving from the Guantanamo Bay Naval Base to the Naval Air Station (NAS) Jacksonville, slid off the runway into the St. Johns River.

This charter aircraft is being used for carrying servicemen, their families and Guantanamo visitors to Florida and then back to Cuba.

According to photos distributed by local WJXT broadcaster, the passengers of the charter aircraft evacuated on its wing after the incident.