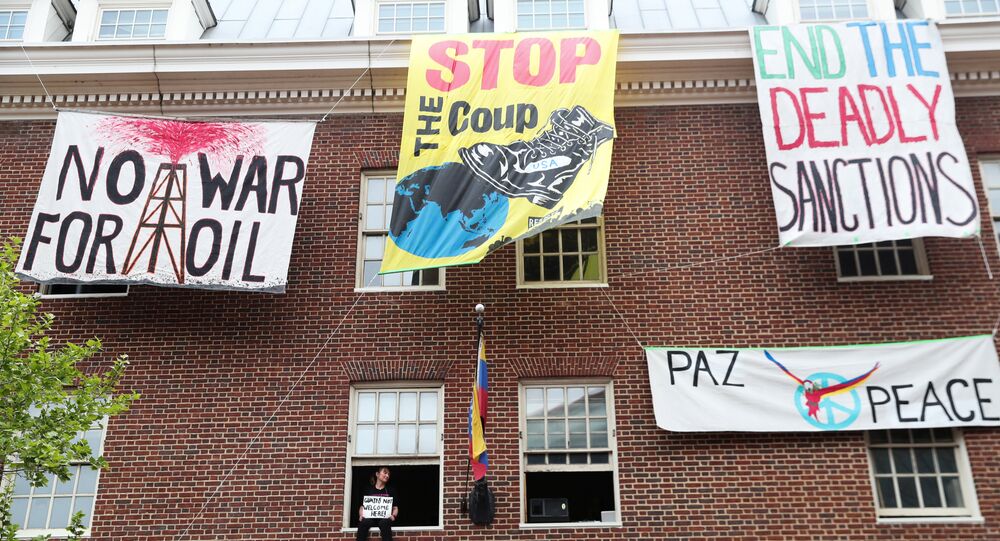 WASHINGTON (Sputnik) - About 40 US activists are present in the Venezuelan Embassy in Washington, DC invited by the Venezuelan government in a bid to prevent the facility from being handed over to representatives of US-backed self-proclaimed interim President Juan Guaido, a Sputnik correspondent reported from the embassy.

The activists explained that from a legal standpoint they are tenants in the embassy and that Washington laws govern their stay on as well as potential eviction from the premises.

The activists described their stay as a victory in staving off a potential entry by the police, which instead of protecting the diplomatic facility in line with international law seem to seek to act in line with US policy of "regime change" and prompt the standing of opposition leader Guaido and his representatives.

Dozens of activists are still staying in the Venezuelan embassy in Washington, DC trying to prevent the building from being taken over by State Dept. and Guaido representatives. The atmosphere inside the building is cautious, but hopeful. Photos by Sputnik reporter #Venezuela pic.twitter.com/IuhWR8UfRS

​One activist explained to Sputnik that the US government seeks to claim legitimacy for Guaido and his representatives if it provides the embassy for them to use.

The atmosphere inside the embassy is cautious, but hopeful. The activists seemed determined and guided by purpose. During the day and in the evening, they organize events, including workshops and discussions on such issues as the situation in Honduras, Cuba and Ukraine; Iran sanctions and developments concerning WikiLeaks founder Julian Assange. Events are displayed on a public board and also include at least one scheduled concert and visits by staff from other embassies such as the Bolivian embassy.

🇻🇪 "The #Embassy Protection #Collective is in the [#Venezuela-n] embassy [in #WashingtonDC] with the permission of the Venezuelan government", so "the Collective is not breaking the law but serving the #people of Venezuela"#HandsOffVenezuela#Trump#imperialism#RegimeChange pic.twitter.com/OGYbhnY91n

The events are organised in the embassy's conference room on the first floor which seems could accommodate some 50-60 people. The room is equipped with speakers and decorated with various placards and signs voicing resistance to US policy such as "US Hands Off Venezuela," "No Coup," "Guaido Not Welcome Here," and "It is Illegal to Give This Embassy to Anyone But the Elected Government of Venezuela."

The (Venezuela) Embassy Protection Collective has brought together some of the most skilled & prominent organizers in Washington DC. Within days it’s managed to develop an organic democratic structure and community that’s inspiring and demonstrates the human potential in the US! pic.twitter.com/9agvKyKkTC

​On Saturday evening, a featured speaker discussed the issue of US imperialism and how affected peoples can respond to it.

© AP Photo / Manuel Balce Ceneta
President Maduro Mocks US Special Envoy Abrams as ‘Vice-King’ of Venezuela
The meeting room on fourth floor is decorated by competing figures in Venezuelan history, one of which is Simon Bolivar, represented by a huge painting marked with the quotation "God grants victory to perseverance." By contrast, a huge mural on the first floor depicts Chavez speaking at the United Nations while addressing indigenous peoples in Venezuela and around the world.

The activists eat at the embassy's first floor and seemed particularly careful about generating and disposing off garbage. They seemed well organized and properly directed. An executive meeting room is available on that floor next to the kitchen. The food is bought from donations and the activists displayed a placard thanking the Monmouth, New Jersey Green Party for providing a donation for the food on Saturday.

Some activists voiced the possibility that Washington police may potentially behave unlawfully toward them. They warned that the slightest provocation, including being untidy inside the facility, may be used by the police as a pretext to enter and evict.

An activist said earlier on Saturday that a woman tried to scream on the embassy's doorsteps and attempted to cause conflict by placing signs on the diplomatic facility's doors and getting in the personal space of an activist. Washington police said she had the right to be there. The activists said they have been trained in nonviolence and are offering such advice to anyone who is present at the embassy and feels may need such advice.

The Sputnik correspondent witnessed the woman return outside the embassy, seemingly unhinged and potentially violent, hurling obscenities and approaching in an aggressive manner when photographed for the purposes of safety. The woman was shadowed by at least one parked car, which also seemed taken aback when photographed. A second car emerged behind almost immediately and both drivers got out chatting.

© Photo : YouTube/EFE BRASIL
WATCH Activist Protest US Coup Plot in Venezuela Straight to Trump Envoy's FACE
The US government has reportedly not issued a formal request for the activists to vacate the embassy either to them or their lawyers. A representative from the National Lawyers Guild was present at the embassy on Saturday and told the Sputnik correspondent she was available to answer questions.

The Embassy Protection Collective activist group has been living inside the Venezuelan Embassy in the United States for the last couple of weeks, as the so-called deadline set by Washington for diplomats to leave expired on April 24.

Venezuela cut off relations with the United States after Maduro accused Washington of orchestrating a military coup in an attempt to effect a change of government and claim Venezuela's resources. Russia, Bolivia, China, Cuba, Turkey and a number of other countries have voiced their support for Maduro as the only legitimate president of Venezuela.