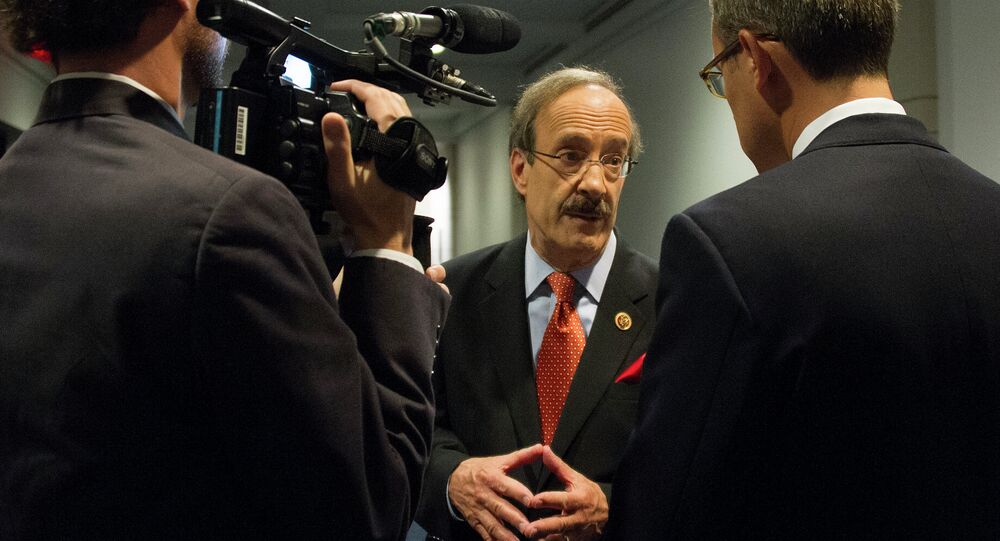 WASHINGTON (Sputnik) - The House Foreign Affairs Committee will hold a hearing soon to evaluate the Trump administration's decision to withdraw the United States from the United Nations-backed Arms Trade Treaty, Chairman Eliot Engel said in a press release on Friday.

US President Donald Trump earlier on Friday announced in a speech to National Rifle Association (NRA) members that he will pull the United States out of the accord, which President Barack Obama signed in 2013 but Congress never ratified.

"The Foreign Affairs Committee will convene a hearing to shine a bright light on this shameful decision," Engel said in the release.

Engel expressed concern over Trump's decision to withdraw from the global treaty for what appears to be a "politically-motivated appeasement of the NRA."

US Senate Foreign Relations Committee Ranking Member Bob Menendez said in an earlier statement that the US exit from the arms treaty jeopardizes US security.

"This is yet another myopic decision that jeopardizes US security based on false premises and fear-mongering," Menendez said. "The Arms Trade Treaty has no impact on Americans' Second Amendment rights."

The senator argued that the treaty does not impose any restrictions on US arms exports, but rather requires other countries to follow the same strict standards that the United States applies in foreign arms sales.

Menendez complained that Trump's decision to exit the treaty rolls back what little progress Congress has achieved on preventing illicit arms transfers.

He also emphasized that the NRA played role in influencing Republican lawmakers and Trump to oppose the accord.

Another senior US administration official said that the US will consult allies in the coming days about the Trump administration's decision to leave the ATT.

The official added that the United States encourages other countries to adopt policies similar to Washington's standards on how to control conventional arms transfers.

The United States has concerns that other countries like Russia and China are not governed by the treaty.

Moreover, the official said Trump is concerned the treaty could impede on the 2nd Amendment Right of US citizens, which allows Americans to bear arms.

© Sputnik / Vladimir Astapkovich
WATCH Cell Phone Apparently Thrown at Trump at NRA Convention
UN Secretary-General Antonio Guterres said he remains a strong supporter of the ATT despite the US decision to exit.

Amnesty International said in a statement that the US move will promote conflicts in far flung parts of the world and put guns in the hands of global terrorists.

The National Rifle Association has long opposed the Arms Trade Treaty, which was endorsed by the UN General Assembly in 2013.

The ATT seeks to reduce illicit arms sales by promoting transparency and establishing common standards for trade in international conventional weapons, according to the Arms Control Association (ACA). The ATT does not place restrictions on the types or quantities of arms that may be purchased or owned by parties to the agreement and does not impact a country's domestic gun laws, the ACA said.

Russia to Stay Out of UN Arms Trade Treaty, Its Standards Too Weak to Join