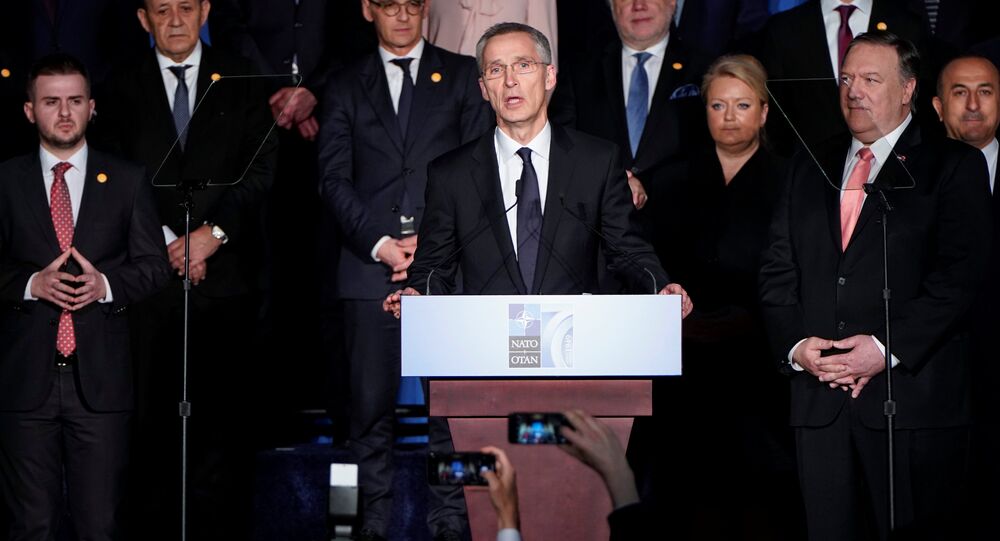 The foreign ministers of the NATO member states have discussed potential measures they can take if Russia continues to violate the Intermediate-range Nuclear Forces (INF) Treaty, NATO Secretary-General Jens Stoltenberg said on Thursday.

"We all believe that Russia continues to be in violation if the [INF] Treaty," Stoltenberg said. "Today, we discussed the way forward, and what potential measures we can take should Russia not return into compliance."

© REUTERS / Ints Kalnins
Russian Foreign Ministry Wishes NATO 'Inner Peace' on 70th Birthday
Russia and the United States have long accused each other of violating the INF treaty, and both sides have denied the accusations. On February 1, the United States announced it was suspending its obligations under the 1987 INF Treaty and launched the withdrawal process. Washington said the withdrawal process will be completed within six months unless Russia remedies its alleged treaty violations.

On Ground-Based Nuclear Missiles in Europe

"We will not mirror what Russia is doing, we will be measured and coordinated. And we have no intention of deploying ground-launch nuclear missiles in Europe," Stoltenberg said.

On Maritime Support For Ukraine, Georgia

Speaking at the press conference, Stoltenberg said that NATO had no intention of deploying ground-based nuclear missiles in Europe. He also noted that the bloc agreed on a package of measures to support Ukraine and Georgia in the Black Sea.

"We agreed on a package of measures to improve our situation awareness and to step up our support for both Georgia and Ukraine in areas such as training of maritime forces and coast guards, port visits and exercises and sharing information," Stoltenberg told reporters after a meeting of NATO ministers in Washington.

The senior official is on a visit to Washington, DC, where he is taking part in a meeting of NATO foreign ministers marking the 70th anniversary of the foundation of the alliance.

The meeting focuses on relations with Russia, burden-sharing and counterterrorism, among other security issues.