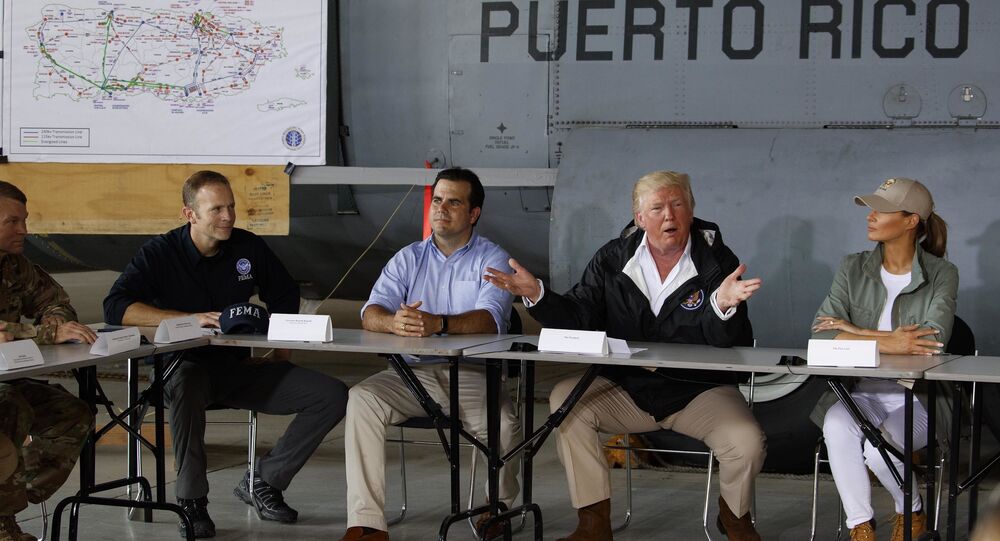 Puerto Rico was severely hit as Hurricane Maria swept over the US island back in 2017, with recovery efforts still ongoing to restore the territory’s battered economy.

Speaking in an exclusive interview with CNN, Puerto Rico Governor Ricardo Rossello said that he would not sit back and allow his officials to be bullied and cursed by the White House.

"If the bully gets close, I'll punch the bully in the mouth", Rossello pointed out, before adding that it would be a “mistake to confuse courtesy with courage".

Separately, Rossello's top aides recounted to CNN a tense meeting at the White House on Wednesday, when top officials from the Trump administration allegedly warned them that representatives of the Hurricane Maria-hit island, which is a US territory, were exerting excessive pressure to arrange a personal meeting with the POTUS to discuss the dire living conditions there.

Despite their request, Trump declined to schedule a tet-a-tet meeting with Rossello to talk over recovery efforts, which have been continuing ever since the hurricane disrupted the island’s day-to-day life nearly two years ago.

According to Puerto Rican officials, White House trade adviser Peter Navarro is among those who nearly threatened the Puerto Ricans:

"You guys have to f***ing stop with the meeting request", one official said, according to the Puerto Rican officials, cited by the American media outlet.

"Your governor is f***ing things up", Navarro added, according to sources at the meeting.

This week’s standoff between the US federal government and Puerto Rican local authorities is a result of earlier reports that Trump had told Republican senators on Capitol Hill that he had some doubts about the wisdom of directing more storm relief aid to Puerto Rico, although it is known that billions of dollars in compensation have already been earmarked by Congress.

However, legislative amendments that would oversee more funds sent to the island in the framework of a larger emergency relief are tied up in the Senate.

"The point was — are we spending the money wisely?" Senator Lindsey Graham, a South Carolina Republican weighed in on the debate, as cited by US media. "I have nothing against helping the people of Puerto Rico, but we have got to spend the money wisely", she stressed.

The POTUS, according to Senators, showed a chart to draw attention to the difference between what Puerto Rico has received compared to other hurricane-affected regions, such as Texas and Florida. At some point, in what seems to be Trump’s particular issue, he reportedly noted that Puerto Rico had received more than $90 billion in aid, most of which has reportedly not been approved for actual spending by the Senate.

"The Trump administration is committed to the complete recovery of Puerto Rico. The island has received unprecedented support and is on pace to receive tens of billions of dollars from taxpayers", POTUS administration spokesman Judd Deere said in a statement, adding, though that “the Trump administration will not put taxpayers on the hook to correct a decades old spending crisis that has left the island with deep-rooted economic problems".

Rossello is meanwhile sure that the president is working off of bad information provided by White House officials, stressing that Trump appears to be treating the islanders as “second class citizens”.

"It's unfortunate that we are having to hear this. These statements lack empathy, but more so they lack the true facts of the matter", Rossello said in response to Trump's comments. "They're not aligned with the truth and reality, No. 1. And No. 2, I just think we have to end this battle of words and just recognize we're not his political adversaries, we're his citizens", the governor added.

Hurricane Maria devastated Dominica, the US Virgin Islands, and Puerto Rico in September 2017. It is considered to be the worst natural disaster on record to affect those locations and is also the deadliest Atlantic hurricane since Jeanne in 2004. Hurricane Maria left over 3,000 people dead and caused $91.6 billion in damage costs.
...
Reddit
Google+
Blogger
Pinterest
StumbleUpon
Telegram
WhatsApp
195