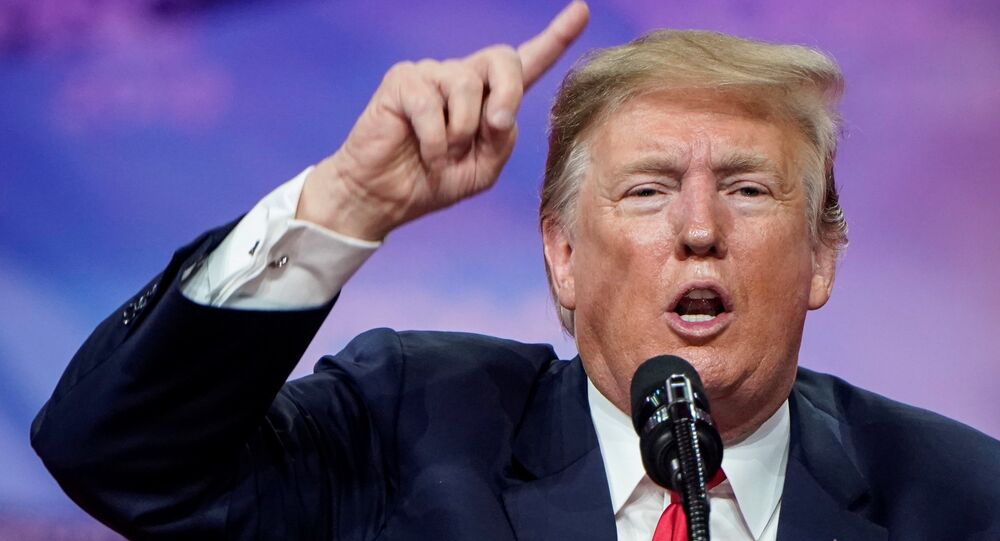 US President Donald Trump has once again managed to rile up social media as he praised a grassroots movement called "Jexodus" (apparently a portmanteau of the words “Jew” and “Exodus”) which encourages Jewish voters to abandon the Democratic Party.

"Republicans are waiting with open arms", Trump tweeted, urging the voters to remember his decision to move the US embassy in Israel to Jerusalem and his handling of the “horrible Iran nuclear deal".

​Trump’s tweet was quickly rebutted by many people online, with some of even challenging the very existence of "Jexodus".

STFU. Every Jew I know hates your guts!

Trump’s claim that Democrats are an ‘Anti-Jewish Party’ is absurd:

There are 27 Jews currently serving in the U.S. House. Twenty-five of them are Democrats; 2 are Republicans.

There is no Jexodus movement.

THERE IS NO JEXODUS MOVEMENT, YOU HATE FILLED PUSTULE. Stop fueling the hate. People are dying. People are taking your words as dog whistles to justify their murderous desires against those who don't look or pray like them. ENOUGH IS ENOUGH. Put down the damn phone and resign.

​The movement’s name also seemed amusing to some.

​A number of people also claimed that the president’s tweet looks inappropriate in the wake of the deadly shooting in New Zealand.

49 people literally just died because of their religion and you want to use this time to bring religion into politics and spread more hate. You are disgusting.

You really don't understand how empathy works, do you?

After tweeting words of support to New Zealand after a HEINOUS terror attack, DON'T follow that up, 20 minutes later, with FAKE NEWS trash about a nonexistent jexodus. It's vile, asshole.

Turn off FoxNews for a minute!

Any other day this tweet would have been merely horrific. Sending it this morning as the world grieves reveals your sociopathy.

​There were also those, however, who appeared to share Trump’s sentiment.

The ‘Jexodus’ movement is a sound decision. The democrat party has become anti-Semite.

You’re a FOOL to be a Jewish Democrat while members of Congress align themselves with Hamas.

Later, she repeated her assertions, saying Jewish organisations were pushing members of US Congress to have "allegiance to a foreign country".