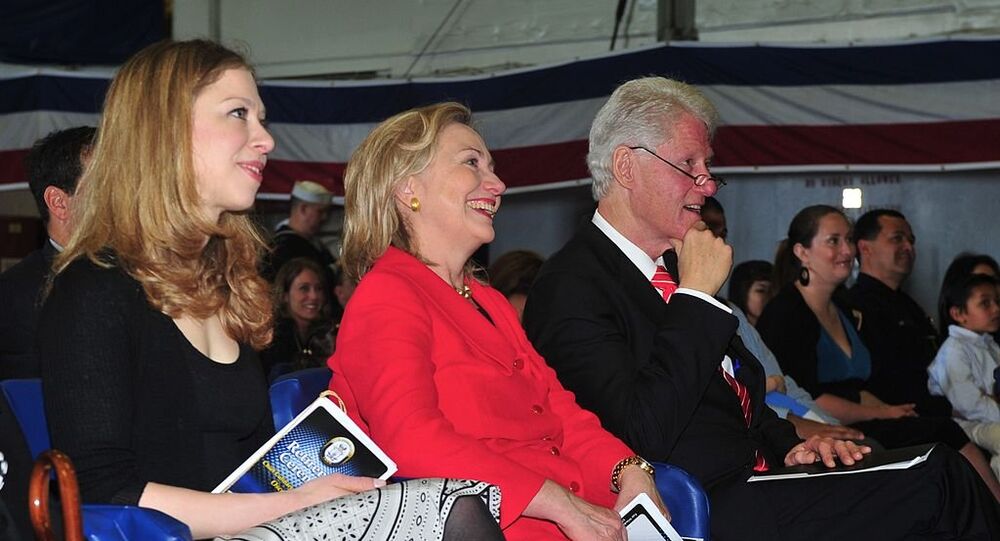 Bill Clinton's special envoy for Northern Ireland, George Mitchell, was one of the key persons that helped advance the peace process in the 1990s and gave his name to a scholarship program which is meant to introduce and connect young Americans to Ireland.

The Clintons have been accused of nepotism and engaging in the politics of revenge over their alleged failed bid to obtain a scholarship for their daughter's boyfriend.

As reported by The Guardian, the allegations come from former Democratic foreign policy adviser Trina Vargo, the founder of the non-profit US-Ireland Alliance and the Mitchell Scholarship programme.

The annual Mitchell programme, which grants one-year post-graduate study programmes in Ireland and Northern Ireland to 12 students, was named in honour of ex-Maine Senator George Mitchell, who served as the US point man for Northern Ireland under Bill Clinton and chaired the peace talks that led to the landmark 1998 Good Friday Agreement.

Trina Vargo claims in her new tell-all book, titled 'Shenanigans: An Insider's View of the US-Ireland Relationship in Uncertain Times', that Bill Clinton recommended Chelsea Clinton's boyfriend for admission to the programme, but that the student had ended up off the shortlist.

The Clintons apparently took it too personally: according to Vargo, Mitchell confirmed in a conversation in 2000 that the then-US president had told him he was "very unhappy" that Chelsea's boyfriend had not been shortlisted.

"It would be hard to believe that the timing of the president's call wasn't aimed at influencing us to make him a finalist," writes Vargo.

According to The Guardian, she believes that the fact that the boyfriend didn't make it onto the shortlist put her on a path to joining the Clintons' "enemies list" — and that this came back to bite her years later.

She recalls that Bill Clinton cancelled his scheduled attendance at a US-Ireland Alliance event in Belfast dedicated to the Good Friday agreement's 10th anniversary.

Vargo also says that in 2012, the State Department, then headed by Hillary Clinton, slashed $500,000 in annual funding for the Mitchell scholarship, citing budgetary measures. She believes, however, that this move "was not about the money".

Vargo's claims were dismissed outright by the Clintons' aides. "Their legacy there is something they are incredibly proud of and one that is well documented. These accusations are baseless and patently false," said Bill Clinton spokesman Angel Ureña and Hillary Clinton adviser Nick Merrill.

They added that the Mitchell scholarship was also hit by a funding cut under Clinton's successor John Kerry.

"Both [were] the product of a constant battle with a Republican Congress to fight for diplomatic and development dollars, there is nothing more to it than that," they told The Guardian.

The Good Friday Agreement — formally known as the Belfast agreement — was signed on 10 April 1998, following negotiations between the British and Irish governments and Northern Ireland political parties.

It set up a democratically elected, power-sharing legislature (the Northern Ireland Assembly), and removed Ireland's territorial claim to the north from its constitution.

It put an end to 30 years of violence in Northern Ireland, known as 'The Troubles', a conflict between pro-Irish republicans and pro-British loyalists, which claimed the lives of over 3,500 people, mostly civilians, between 1969 and 1998.

Bill Clinton, who was at the helm of the United States at the time when the Good Friday agreement was crafted, praised it as a "work of genius" which called for "real democracy" and "shared special relations".