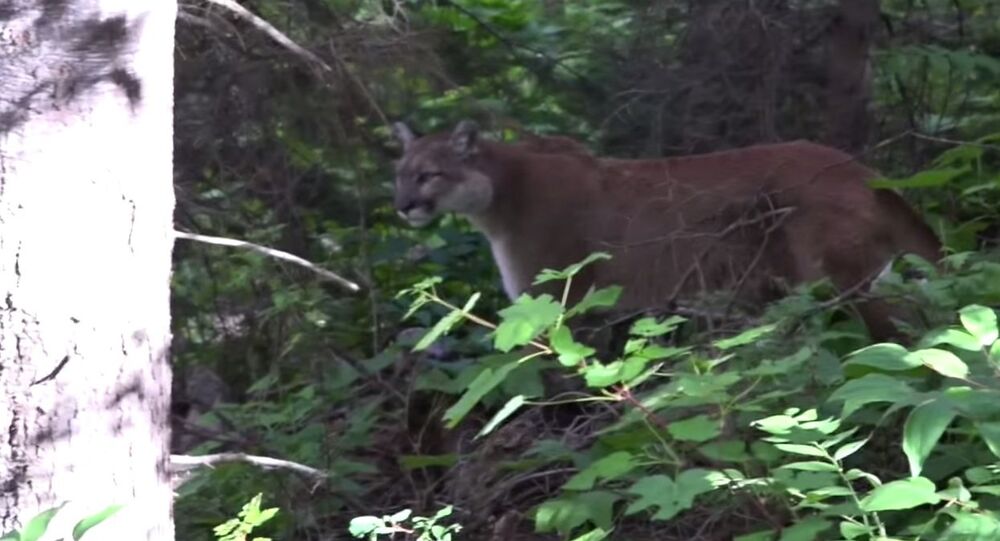 Kauffman, 31, was attacked whilst on a jog on a footpath in Horsetooth Mountain Park. He noticed the beast approaching after hearing pine tree branches rustling behind him and spotted the lion roughly ten feet away.

Travis Kauffman went for a run in Colorado and was attacked by a mountain lion on his journey, but survived the ordeal by choking the predator to death.

"One of my worst fears was confirmed" he said in a Colorado Parks and Wildlife video ten days after the incident occurred on 4 February, with cuts across his face and arms. "It made my heart sink into my stomach a little bit."

"I threw my hands up… but it kept approaching," Kauffman said. "As it got close it just kind of lunged at me. I threw my arms up and it latched onto my wrist. I was just kind of protecting my face."

"It started clawing along my face and then my legs. I was screaming the whole time, doing my barbarian yell as best I could."

Mr. Kauffman tried to push the animal off of him, which resulted in both man and beast tumbling down an embankment off the side of the path. He called the rest of the ordeal a "wrestling match" where the animal was "thrashing and it still had my wrist locked in its jaws".

"I was able to get my left knee to pin down its back legs. As a pretty new cat owner I realised if you get a cat on its back, its back legs go crazy … I was pretty wary of the back claws hitting my guts or my groin or anything like that."

© Sputnik / Alexei Danichev
Intern Killed By Lion at Wild Animal Refuge Center After Two Weeks on Job
Mr. Kauffman continued, stating that he was grabbing at nearby sticks and trying to stab the animal in the throat. "Unfortunately the sticks were kind of rotten so they kept on breaking."

"Then I was able to pick up a big rock with my left hand and I was trying to hit it on the head with a big rock but it was kind of a tough angle because my wrist was still in its mouth,” he said.

During the struggle, he managed to pull his right foot around the lion's neck. “I stepped on its neck and eventually I was able to suffocate it," Mr. Kauffman said. "And then it finally released from my wrist.”

"I ended up having to run another three miles down," Mr Kauffman said, adding that he met three other runners who helped him reach the hospital. "My face was a bloody mess when I first got there."

Mr. Kauffman sustained lacerations on his cheek which needed seventeen stitches, a lacerated nose requiring six, in addition to puncture wounds on his face and wrists requiring an additional five more. "I feel great. Things are healing up really nicely."

After finding the slain cat, Colorado Parks and Wildlife officers conducted an autopsy which revealed the animal was only four to five months old and weight roughly 40 pounds.

© Sputnik / Игорь Подгорный
Dracula Ant Crowned Fastest Animal on Earth – Report
Their subsequent investigation confirmed Mr Kauffman’s account, and an autopsy revealed the animal had been four to five months old and weighed 35 to 40 pounds. Park services also said that less than 20 fatal mountain lion attacks had been reported in over 100 years as the cats are "elusive animals" who "tend to avoid humans"

"It’s just one of those sensational stories," Mr Kauffman continued. "It’s super rare. I just feel like I should go buy a bunch of lottery tickets."

Mr. Kauffman finally advised against running alone or wearing earphones as he was able to survive the attack by hearing the animal approaching.