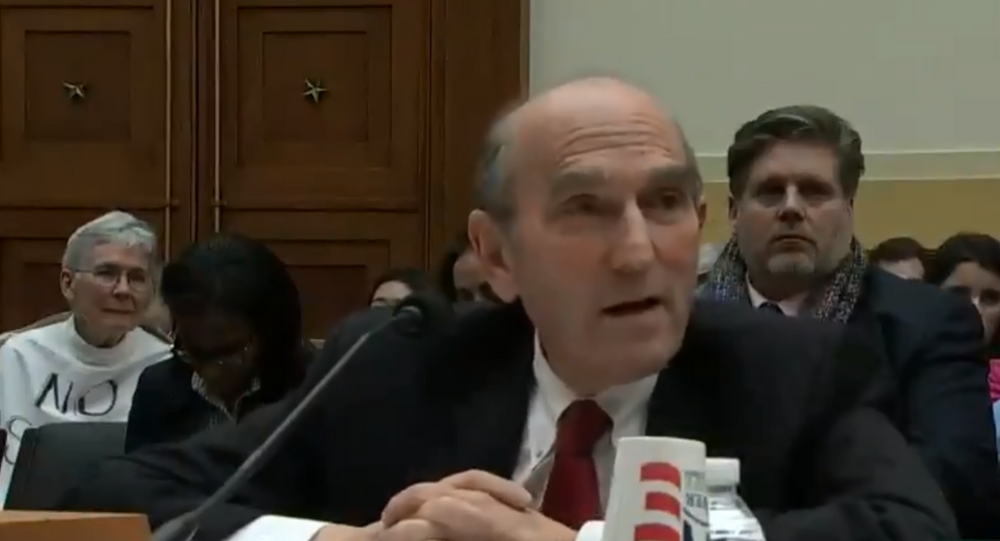 Minnesota Congresswoman Ilhan Omar pulled the receipts on Elliot Abrams, the US special envoy to Venezuela, this week, pointing out his past crimes in his involvement in the Iran-Contra affair during the Reagan administration.

Speaking at a House Foreign Affairs Committee hearing on Wednesday, Omar began by pointing out that Abrams had pleaded guilty in 1991 to two counts of withholding information from Congress over the Iran-Contra affair, a plot developed in the 1980s by the Reagan administration to fund right-wing militias in Nicaragua. Abrams was the assistant secretary of state during the Reagan years, and proved to be a key figure in the scandal.

"I fail to understand why members of this committee or the American people should find any testimony you give today to be truthful," Omar told him.

​The Minnesota lawmaker later brought up remarks made by Abrams in February 1982, when he told the Senate Foreign Relations Committee that the US policy in El Salvador was "a fabulous achievement."

It should be noted that Abrams made those comments despite the 1981 massacre of civilians — many women and young children — living in the village of El Mozote, which was carried out by Salvadoran soldiers who were trained by US military personnel during the country's civil war.

"Do you think that massacre was a fabulous achievement that happened under our watch?" Omar asked Abrams, who replied by suggesting that her question was "ridiculous."

"I am not going to respond to that kind of personal attack, which is not a question," he added.

"Yes or no," continued Omar. "Would you support an armed faction within Venezuela that engages in war crimes, crimes against humanity or genocide if you believed they were serving US interests as you did in El Salvador, Guatemala and Nicaragua?"

Abrams did not respond, instead indicating that he doesn't believe that "this entire line of questioning is meant to be real questions." He also noted that when it comes to Venezuela, the Trump administration's interest is to "support the Venezuelan people's effort to restore democracy to their country."

Not interested in letting Abrams off the hook just yet, Omar used the remainder of her time by inquiring if the "interest of the United States includes protecting human rights and protecting humans against genocide."

To that end, Abrams replied with, "that is always the position of the United States."

Abrams was named the special envoy to Venezuela in January, shortly after the Trump administration announced that it recognized opposition leader Juan Guaido as the country's interim president. Elected Venezuelan President Nicolas Maduro, however, continues to function as the country's president and his government remains in place, despite sanctions, calls from the US and some of its allies to step aside, and threats regarding what will happen if he does not.

Omar is one of the few members of the US Congress to publicly oppose US intervention in Venezuela.