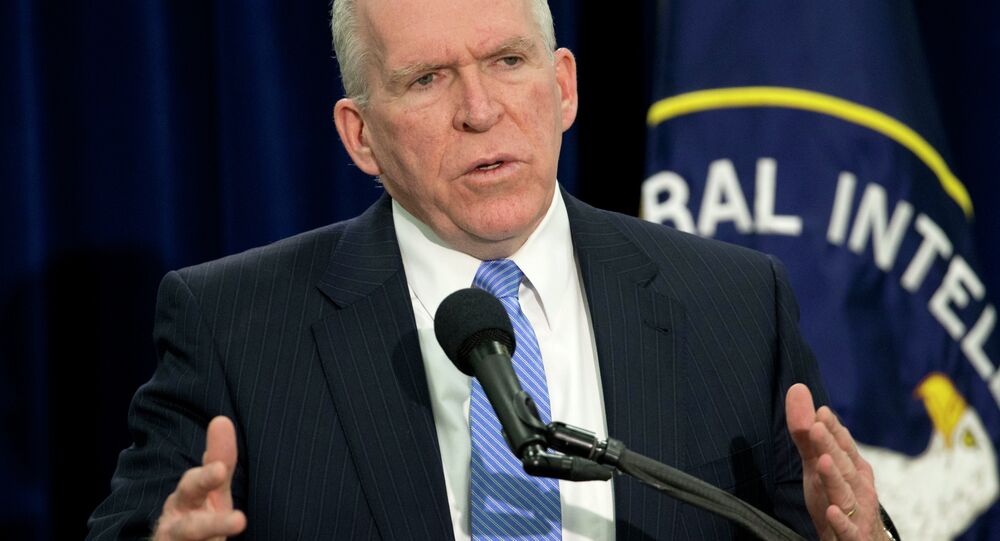 Former CIA Director John Brennan, who once beat the drum about alleged collusion between Donald Trump and Russia, backed off that position in a recent TV interview, saying he simply found the US president’s policies puzzling.

During an interview with MSNBC's Chris Hayes Tuesday night, Brennan said, "I don't think I've said that" when Hayes prompted him about his repeated suggestions that Trump's "policy positions are the product, essentially, of some concealed relationship with the Russians."

"I think we're saying there are demonstrated examples of Mr. Trump's policy actions that are undermining the US role internationally," Brennan said, also speaking of the opinion of David Laufman, the ex-chief of the Justice Department's Counterintelligence and Export Control Section, whose opinions Hayes had just cited.

© AP Photo / J. Scott Applewhite
House Democrats Will Expand Russiagate in 2019 to Push Trump Toward War
"Whether or not there's some type of secret relationship that Donald Trump has with Mr. Putin, I don't know… I question why Mr. Trump is doing some of these things. Is he beholden to Putin in some way? Is he fearful of Mr. Putin, of the Russians, whatever? But I do think a number of senior officers and officials in the US government, both current and former, who are really scratching their heads and trying to understand why Trump is pursuing some of these policies," Brennan told the host.

That's a remarkable reversal for the man who wrote in the New York Times as recently as August 2018 that "Russian denials" and "Mr. Trump's claims of no collusion are, in a word, hogwash"; and who endorsed the Steele dossier that purportedly demonstrated the Russians had Trump over a barrel, but which we now know has extremely questionable veracity.

But that's far from the first time Brennan made such claims. Following Trump's summit in Helsinki with Russian President Vladimir Putin in July, Brennan attacked the US president again, saying the meeting "rises to & exceeds the threshold of 'high crimes & misdemeanors.' It was nothing short of treasonous."

​Ironically enough, Brennan tried to unring that bell, too — again on MSNBC — but that time with Rachel Maddow:

Remember when John Brennan said Trump's behavior was "treasonous"? Turns out he didn't mean it: pic.twitter.com/PVm7mVkiJ5

© REUTERS / Maxim Shemetov
Russiagate Is Dead - At Least for Democratic Midterm Candidates
It's remarkable how similarly that situation unfolded to the one with Hayes on Tuesday: both hosts, whom the established Russiagate narrative makes positively apoplectic, press Brennan on the veracity of his bombastic and reaching statements about Trump, eager to score the slam dunk. Both times, the ex-CIA chief backs off, saying he didn't mean what he said.

Perhaps it's a question of Brennan simply leaping before he looks, but that seems a tad irresponsible, doesn't it, from someone who believes he's entitled to the nation's highest security clearances even after becoming a private citizen again? Perhaps Brennan knows that whether he walks back his statements or not, his explosive rhetoric gets the hearts of Democrats racing with fury at Trump and xenophobia at Russia and Russians, whom Brennan's long CIA tenure focused on building up as America's Number One Enemy?