WASHINGTON (Sputnik) - The US Department of Treasury will monitor closely whether En+ Group PLC (En+), United Company RUSAL PLC (Rusal), and EuroSibEnergo (ESE) adhere to the requirements for sanctions relief, Secretary of Treasury Steven Mnuchin said in a statement on Thursday.

"They [the entities] have committed to provide Treasury with an unprecedented level of transparency into their dealings to ensure that Deripaska does not reassert control," Mnuchin said in the statement. "Treasury will be vigilant in ensuring that En+ and Rusal meet these commitments."

Mnuchin added if the companies breach these terms, they will face very serious consequences and the sanctions will be restored.

The US Treasury issued the statement in advance of a classified briefing with senior leaders in Congress, where some Democrats in the House of Representatives oppose a decision by Treasury to remove sanctions on the three companies. Lawmakers demanded the briefing so that Mnuchin could explain the Treasury's planned rollback of sanctions on the three Russian firms.

© REUTERS / Bobby Yip
Aluminum Giant Rusal Shares Up by 25 Percent at Opening of Hong Kong Exchange
The Treasury secretary said he was committed to providing members of Congress with a full briefing that addressed all of their questions and concerns.

"En+, Rusal, and ESE were designated for sanctions solely because they were majority-owned or controlled by Deripaska," Mnuchin said. "These entities are undergoing significant restructuring and governance changes that sever Deripaska's control and significantly diminish his ownership."

Deripaska, the founder of one of Russia's largest industrial groups and a separate charitable foundation, remains subject to US sanctions, Mnuchin added.

"One of the goals of sanctions is to change behaviour, and the proposed delistings of companies that Deripaska will no longer control show that sanctions can result in positive change," Mnuchin said.

The Trump administration has sanctioned 272 Russian-related individuals and entities, of which 256 are subject to sanctions administered by Treasury, Mnuchin said. 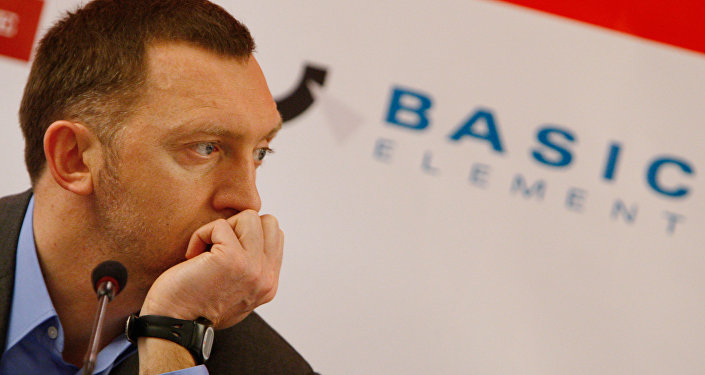 © RIA Novosti . Anton Denisov
Deripaska Steps Down as Director of Russian Aluminum Giant Rusal
The Treasury Department announced last month that it would lift the sanctions on Rusal, EN+ Group and EuroSibEngergo in January after the companies agreed to undertake structural reforms to reduce the ownership of businessman Oleg Deripaska.

Since the announcement, Democrats in Congress have indicated that they will use the powers of Congress to seek to block the rollback of sanctions, and have filed draft resolutions that would reject the proposed delisting of EN+, Rusal and EuroSibEnergo.

But media reports in recent days have said that Democratic lawmakers do not have enough support from President Donald Trump's Republican allies in the Senate to block the move. Republican Party leaders have not publicly challenged the Treasury's move, the Wall Street Journal noted.

The Treasury's decision, which it announced on December 19, is due to go into effect after 30 days on January 18 if Congress does not block the move.