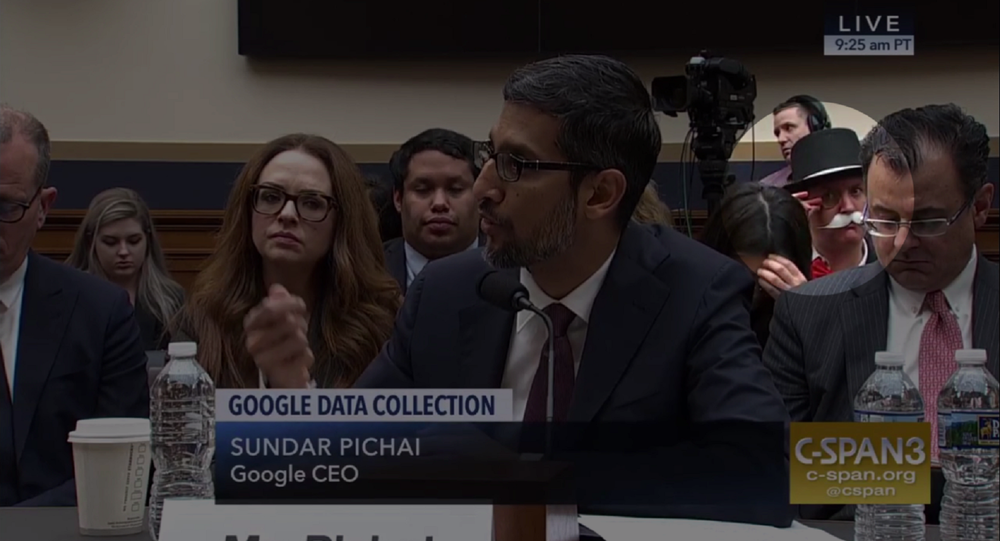 Google CEO Sundar Pichai was in the hot seat on Tuesday as US lawmakers on the House Judiciary Committee grilled him with questions about political bias at the company, the company’s plans to wade into the Chinese market with the Dragonfly search application and data privacy.

But it was a lone protester dressed as the Rich Uncle Pennybags, the mascot of the board game "Monopoly," who stole the show.

One Twitter user joked that Pichai himself is Rich Uncle Pennybags, but noted that "the Monopoly man" was sitting two rows behind him.

The advocacy group and progressive think tank Public Citizen noted that Google spent "more money lobbying politicians in 2017 than any other company."

Mr. Pennybags' protest would not have been complete without the inclusion of props, however. The activist had a bag filled with cash on him during the hearing.

He also had a yellow card with Google's logo on it that he tucked into the brim of his hat. It wasn't immediately clear what the card said, but Twitter users speculated that it was a "get out of jail free" card, similar to the one in the board game.

Pennybags' moustache also appeared to grow in size during the hearing, but it isn't clear whether that growth coincided with any lies being told.

Twitter user Ian Madrigal claimed to be behind the gag, posting selfies with his various props on the platform on Tuesday. Madrigal is the strategy director for Revolution Messaging, a firm started by members of former President Barack Obama's 2008 campaign and Sen. Bernie Sanders' 2016 presidential campaign.

He explained the message behind the "get out of jail free" card, likening it to Google's practice of "forced arbitration," which requires that the two parties of a dispute argue their sides in front of a panel. Forced arbitration has been criticized as insensitive to victims of workplace sexual assault. Madrigal called it a "get out of jail free" card for "abuse and discrimination."

The point of the multiple moustaches: "I have more mustaches than Google has competitors," Madrigal wrote. "End the Monopoly."

This is not the first time Madrigal has made headlines for dressing as Pennybags during congressional testimonies.

He previously protested in character when Richard Smith, the former CEO of consumer credit agency Equifax, testified before Congress after hackers breached the company's servers and accessed personal data, including social security numbers and addresses, of 145.5 million people.