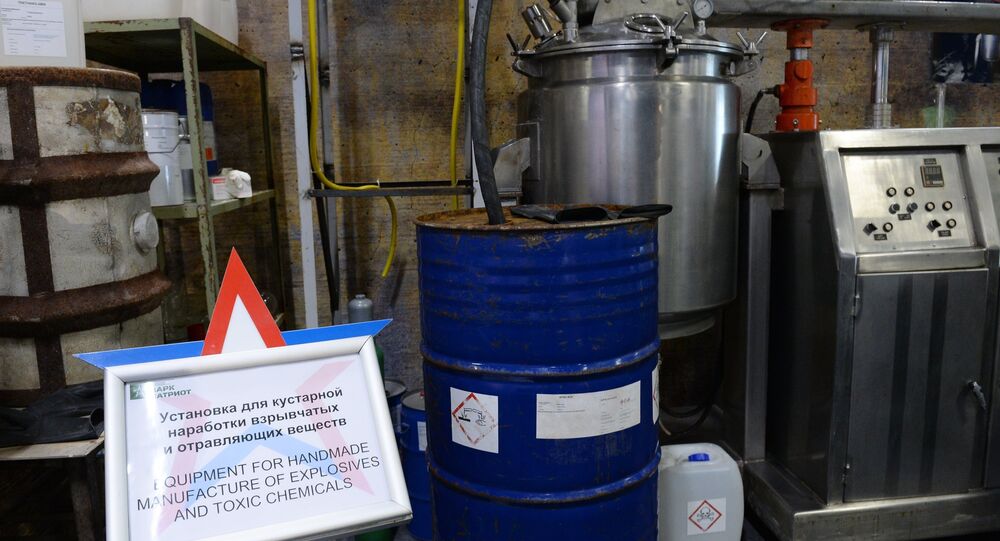 A Florida man has been arrested on suspicion of manufacturing a chemical powerful enough to blow up a neighbourhood block, used by terrorist groups like Al Qaeda and in the 2017 Manchester bombing.

Jared Coburn, 37, was arrested in Lake Helen, Florida, on Tuesday after police received a notice about explosive materials in his home, the Volusia County Sheriff's Office and local reports said, cited by NBC News.

The police discovered jars filled with triacetone triperoxide, a white crystal powder colloquially known as the "Mother of Satan." The substance was used in the 2017 Manchester Arena bombing, the 2015 Paris attacks and by "Shoe Bomber" Richard Reid, who attempted to blow up a commercial airplane in 2001.

Volusia County Sheriff Mike Chitwood said Coburn claimed he was trying to make homemade fireworks. Chitwood also noted that Coburn was savvy enough to create the chemical and not blow himself up in the process. Coburn reportedly told police that his experience in manufacturing explosives was borne out of a passion for model rockets; he began to experiment with other types of explosives to make his models more exciting. Coburn said he used YouTube videos to “progress his knowledge,” the police report says.

“We're not going to be able to move this to our range to detonate. We're probably going to detonate it in a field over here,” Chitwood said of the highly volatile substance on Tuesday night.

The police got help from the Federal Bureau of Investigation (FBI) and the Bureau of Alcohol, Tobacco, Firearms and Explosives (ATF) to move the substance, and they later detonated it in an uninhabited area.

If you heard a boom in Lake Helen, that was us detonating one of the items. All good. There will be more booms, so don't be alarmed!

Police said they were grateful for the anonymous tip that led to the discovery of the explosives.

“If we wouldn’t have gotten that tip, who would know if we would’ve ever found out? Or it may have been after the fact. A very volatile situation would have taken place, and somebody could’ve gotten hurt or, God forbid, killed. So we’re very grateful for that anonymous tip,” Volusia County Sheriff's Office Bomb Squad Lt. Lou Marino said.

“Mother of Satan” is usually detonated by ignition, but it is so unstable that it can explode on its own. The police added that Coburn made the substance out of everyday household materials, such as nail polish remover and hair dye.