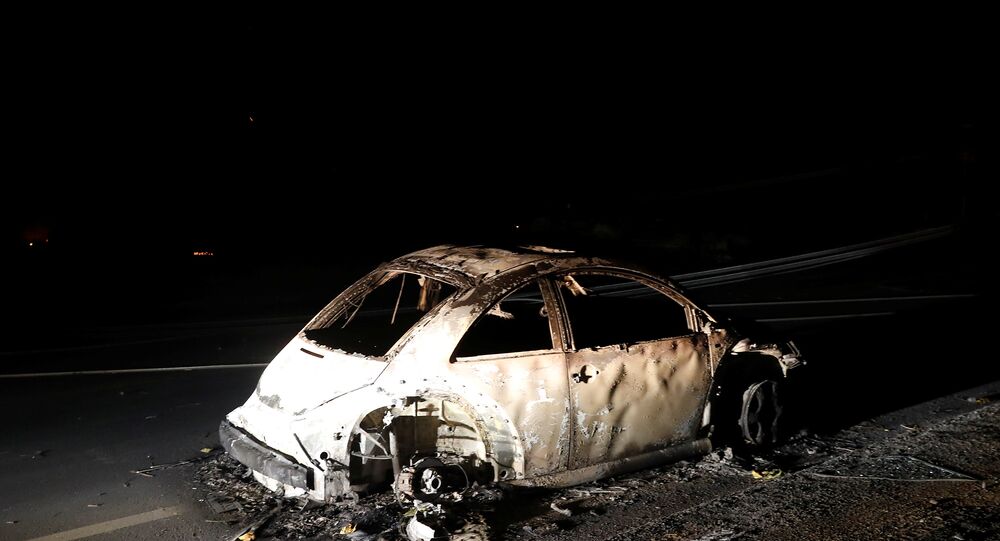 On Friday, the Butte County Sheriff's Office announced that officials had discovered five bodies of people trapped in cars as they fled the fast-moving Camp Wildfire the previous day.

© AP Photo / Don Thompson
Escaping Paradise: Tens of Thousands Flee California Wildfire (VIDEOS, PHOTOS)
The fast-moving Camp Wildfire in northern California has already destroyed 70,000 acres since erupting on Thursday. Dramatic footage showed residents of the town of Paradise fleeing on the highway through a gauntlet of flames. At least 40,000 people have been forced from their homes by the blaze, which Cal Fire says is only 5 percent contained.

The sheriff's office reported that the five bodies, found in burned-out cars along the highway, could not immediately be identified and that autopsies would be performed to determine identity and cause of death.​

Harrowing footage recorded Friday shows dozens of cars burned through by the blaze. Thursday reports said that people had been seen abandoning their vehicles during the evacuation, but officials' recent discoveries show that not everybody was able to make that escape.

These abandoned and burned out cars shows you what a panic it must have been for residents trying to escape the Camp Fire. Unreal scenes in Paradise, CA, this morning. #CampFire pic.twitter.com/AhBuWzS0Tx

Fire departments from surrounding counties sent their forces to Butte County, noting that over 2,300 personnel were on hand to combat the blaze and help victims.

A view from @NTFPD_ crews on the front lines of the #CampFire today. Over 2300 personnel are on scene to help #ButteCounty communities through this devastating fire. #MutualAid pic.twitter.com/aslznLfwg8

​​The National Weather Service has issued red-flag warnings for fire dangers across much of California, where low humidity and high winds create optimally dry conditions for a fire to explode into a conflagration, such as happened near Paradise on Thursday.

Utility Service Pacific Gas & Electric said Friday that about 25,000 customers were currently without fire due to impacts of the Camp Fire.

We can all smell the smoke in the air. We, along with several agencies in the state, have responded to a request for mutual aid. Sgt. Fortier and Officer Lopez (pictured) are stationed in the Forrest Ranch Area assisting with evacuations related to the Camp Fire in Butte County. pic.twitter.com/gfqzIwTO3y

Meanwhile, in the south of the state, the Woolsey Fire east of Los Angeles has scorched over 10,000 acres, tearing through the town of Thousand Oaks and forcing at least 75,000 residents to evacuate.​