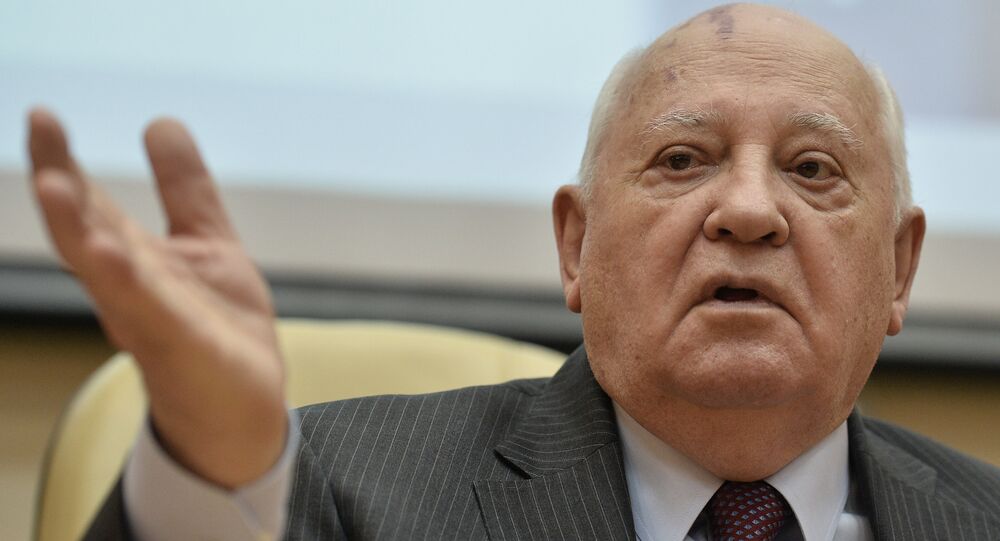 MOSCOW (Sputnik) - Donald Trump's decision to scrap the INF Treaty with Russia means an announcement of a new nuclear arms race but it is not too late to resolve differences at the negotiating table, former Soviet President Mikhail Gorbachev said in an opinion piece published in The New York Times.

"A new arms race has been announced. The I.N.F. Treaty is not the first victim of the militarization of world affairs. In 2002, the United States withdrew from the Antiballistic Missile Treaty; this year, from the Iran nuclear deal. Military expenditures have soared to astronomical levels and keep rising," Gorbachev wrote.

Gorbachev noted that both sides had expressed concerns over each other's compliance with the treaty. However, while Russia has suggested that Moscow and Washington should resolve their issues through negotiations, the United States has preferred to avoid talks.

"With enough political will, any problems of compliance with the existing treaties could be resolved. But as we have seen during the past two years, the president of the United States has a very different purpose in mind. It is to release the United States from any obligations, any constraints, and not just regarding nuclear missiles. The United States has in effect taken the initiative in destroying the entire system of international treaties and accords that served as the underlying foundation for peace and security following World War II," the former Soviet president added.

Gorbachev, however, believes that it is not too late to return to the negotiating table and prevent a disastrous outcome with the help of the United Nations and the United States' allies.

"I hope that Russia will take a firm but balanced stand. I hope that America’s allies will, upon sober reflection, refuse to be launchpads for new American missiles. I hope the United Nations, and particularly members of its Security Council, vested by the United Nations Charter with primary responsibility for maintaining international peace and security, will take responsible action," Gorbachev wrote.

© CC0
EU Will Have to Buy More US Arms to Make Trump Reconsider INF Withdrawal - MEPs
Russian Foreign Minister Sergei Lavrov said on October 25 that recent talks between Russian President Vladimir Putin and US National Security Adviser John Bolton made it clear to Moscow that Washington had already made up its mind about leaving the treaty and the withdrawal would be announced in about a month-and-a-half. Prior to that, Lavrov also said that any actions by Washington in that area would be met with counteractions.

US President Donald Trump announced on October 20 that the United States would pull out of the INF Treaty, claiming that Russia violated the agreement. Kremlin spokesman Dmitry Peskov refuted Trump's accusations and warned that Russia would be forced to take measures to ensure its security if Washington started developing weapons prohibited under the agreement.

Ministry of Defence of the Russian Federation
Russian FM: Moscow Provides US Info on Missile Tests That Allegedly Violated INF
The Intermediate-Range Nuclear Forces (INF) Treaty was signed in 1987 by Gorbachev and then US President Ronald Reagan, who agreed to destroy all cruise or ground-launched ballistic missiles with ranges between 500 and 5,500 kilometers (310 and 3,400 miles). If the United States does withdraw from the treaty, it will pose a real danger to Russia as Washington could go on to deploy intermediate-range missiles in Europe, close to Russia's borders.

The INF Treaty has an unlimited duration and each side can terminate it by providing compelling evidence to substantiate its decision. Russia and the United States have repeatedly accused each other of violating the treaty.