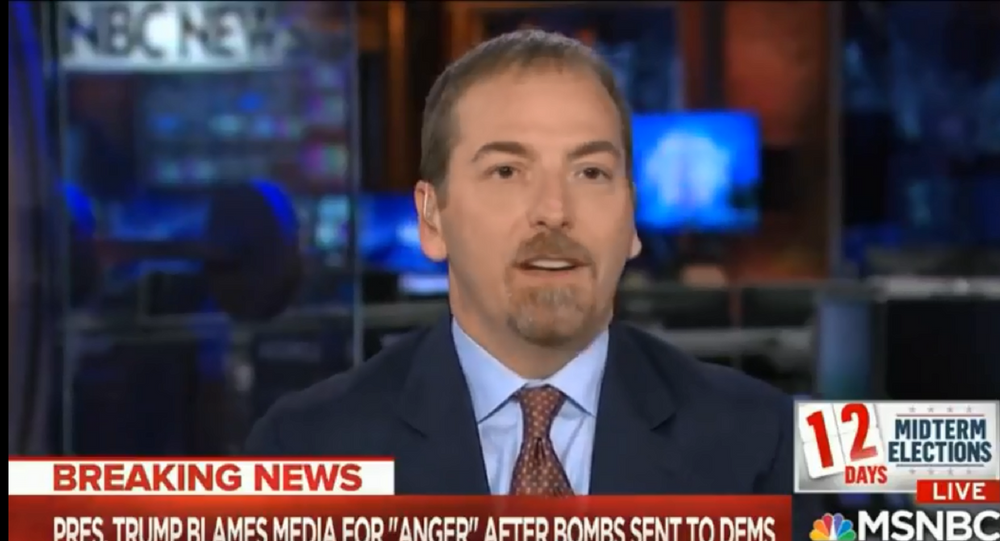 The FBI and other agencies are continuing to hunt for the person or people responsible for shipping a number of explosive devices to prominent Democrats beginning with billionaire financier George Soros on Monday and most recently Hollywood actor Robert De Niro on Thursday.

As should be expected, while the FBI and other authorities conduct their investigation, the mainstream US press is also hunting down clues, pondering motives, talking to experts and analyzing the facts in an effort to make sense of the chaos.

Some in the mainstream media, however, really just seem to be throwing things out there and seeing what sticks to the wall. The host of MSNBC's "Meet the Press," Chuck Todd, who is also the political director for NBC News, is one commentator engaging in breathless guesswork to a national audience.

Who is the culprit, according to Todd? Is it a lone wolf, driven crazy by the political rhetoric of the past two years, or the "#MAGAbomber" as Twitter has theorized? Perhaps it's a Democratic voter disgruntled by the direction of the party.

If you thought those things, you've probably learned nothing over the past couple of years, because Todd did not make any of those conjectures. Instead, he pointed the finger at Russia — like any good liberal media newsman would.

"This feels like a spot — I have this fear this could be some Russian operation too — designed to do what's happening now. More of this — you know. In some ways, we shouldn't rule out — it is dividing us," Todd said during a panel on the bombing attempts.

The anchor began the segment by playing a clip of US President Donald Trump calling on political leaders on Wednesday night to stop portraying their opponents as "morally defective." Trump blamed the media for "anger" in American society on Thursday.

Perhaps ironically, Todd's fearful remarks about the lengths Russia will go to in order to spread discord followed a discussion of the "big lie."

Alter spoke about a propaganda technique called the "big lie," popularized by Nazi Propaganda Minister Joseph Goebbels in 1941 when he said, "The English follow the principle that when one lies, one should lie big and stick to it." The term has since come to mean that effective lies are so "colossal" that nobody could believe that the person who told the lie "could have the impudence to distort the truth so infamously," in Hitler's words.

"You just tell a lie as big as you can, because you know a lot of people are gonna believe it," Alter said before Todd floated the "Russian operation" theory.