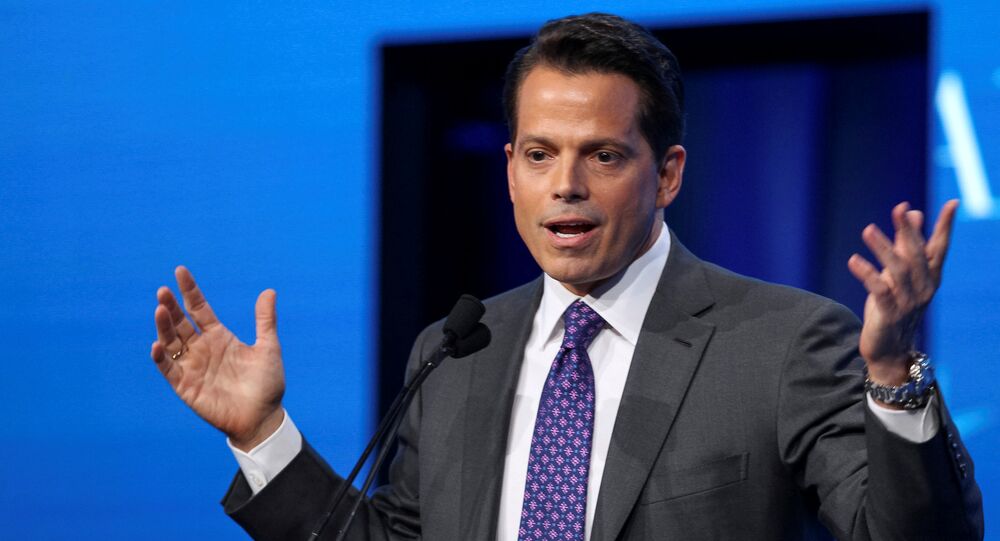 Scaramucci served only 10 days as White House communications director, but apparently he has a lot to say.

Anthony Scaramucci, erstwhile communications director of the White House, albeit for only 10 days, is publishing a memoir entitled "Trump, the Blue-Collar President," in which he reflects on his time with US President Donald Trump's administration, as well as events that preceded his appointment.

In his book, Scaramucci praises his former boss while blasting Trump's former chief strategist Steve Bannon, whom he calls a hypocrite and a weirdo, The Week reports.

"I know him well, and I believe he has an intellect that is uniquely suited to the presidency," Scaramucci writes of Trump. "He never let anyone know he was gathering information to make policy out of it… So he made it seem like he was chatting, talking economics and trade policy the way you'd talk about the New York Mets. Then he synthesized all the responses into one position, letting in the good bits and keeping out the bad."

© AP Photo / Pablo Martinez Monsivais
'Watch Your Back': Melania Trump Says Some White House Staffers Can't Be Trusted (VIDEO)
According to the book, Trump understands the common man and displays an "authenticity" other politicians lack.

Meanwhile, the SkyBridge Capital founder lashes out at Bannon, calling him "megalomaniacal" and "one of the biggest hypocrites in a town lousy with them."

"It was as though he was borderline delusional, and I'm not saying that in the heat of some late-night phone call," Scaramucci writes of Bannon. "His was a power-dream fantasy."

Near the end of his time at the White House, Scaramucci gave a late-night phone interview to The New Yorker, in which he said, among other things, "I'm not Steve Bannon. I'm not trying to suck my own c*ck."

After his 10 days in office, Scaramucci was fired on July 31, 2017, by White House Chief of Staff John Kelly, who does not avoid Scaramucci's criticism in the book, either.

"His personal insecurity has proven to be a poor match with the self-confident, gregarious president," Scaramucci reportedly writes of Kelly, who he says is "incapable of recruiting a compatible staff to work with him."

"I'm hopeful that the president will choose someone as his next chief who actually likes him."

© AP Photo / Kevin Hagen
Bannon: Trump Willing to Make Trade War ‘Unbearably Painful’ for China
Scaramucci's book also reportedly mentions Reince Priebus, former chair of the Republican National Committee and Kelly's predecessor as White House chief of staff, saying Priebus was a colleague and something of a friend during Mitt Romney's 2012 presidential campaign. However, the relationship apparently crashed and burned when Priebus "sold himself out" to Bannon in what Scaramucci calls a joint effort to push him out of the White House.

"He joined the rodent family in order to survive," he writes of Priebus, who was fired by Trump on July 28, 2017, shortly before Scaramucci himself. Kelly's dismissal of Scaramucci was one of the first actions he took as chief of staff.

Despite the fact that all three men — Scaramucci, Bannon and Priebus — were eventually kicked out of the White House, Scaramucci still pledges his loyalty to Trump.

"From my current vantage point, I might be in a better place to help the president than when I was on the inside," he writes. "The way I look at it, I'm still in the orbit, but far enough away to have an objective view."

Scaramucci Thinks President Should Be Tougher in His Virginia Violence Reaction