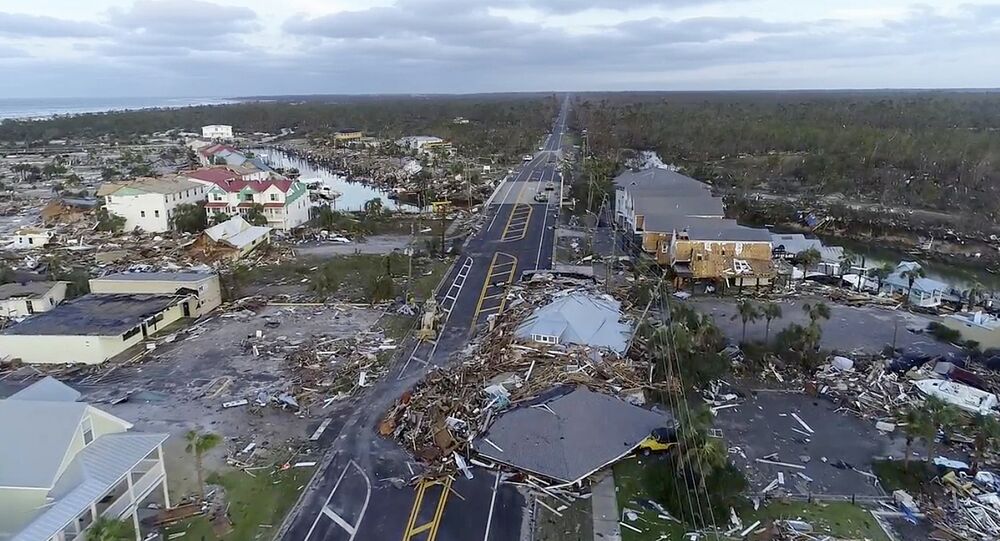 After “ambushing” Florida with a sudden overnight strengthening into Wednesday, Hurricane Michael roared ashore with winds of 155 mph, the third-most powerful hurricane to ever strike the US. By Thursday afternoon the storm had greatly weakened, but was still dangerous and dumping inches of rain on areas still recovering from Hurricane Florence.

© AP Photo / Gerald Herbert
Hurricane Michael, Most Powerful Storm in Decades, Smashes Florida Coast (PHOTOS, VIDEOS)
Michael, now downgraded from a hurricane to a tropical storm, is presently located around 60 miles west of Raleigh-Durham, North Carolina, although rain and wind can be felt from the storm across a 500-mile-wide swath of the US spanning from Georgia to Maryland. The storm sped up as it began to move inland, now traveling northwestward at 23 mph, according to the National Hurricane Center, administered by the National Oceanographic and Atmospheric Administration (NOAA).

At least six people are confirmed dead as a result of the storm, officials announced Thursday afternoon, including one in North Carolina. Two were killed Wednesday afternoon by falling debris: a man was killed by a tree that fell on his home in Greensboro, Florida, and a girl was killed in Seminole County, Georgia, when the storm threw a metal carport through her family home's roof, CNN reported.

Comparisons to the damage wrought by Michael's 155 mph winds and powerful storm surge in the Florida Panhandle all seem to return to warzones.

"It's very hard to explain," Jason Gunderson, a member of the Cajun Navy rescue group, told CNN. "The only way I can explain it, through my eyeballs, is a Third World country war zone." Another survivor told CBS his town looked like an atomic bomb hit it.

Aerial footage of the city the day after landfall leaves little room for argument:

Aerial view of devastation at #MexicoBeach, Fl caused by #HurricaneMichael

​"It feels like a nightmare," Linda Albrecht, a councilwoman in Mexico Beach, Florida, where the storm made landfall early Wednesday afternoon, told CNN. "Somebody needs to come up and shake you and wake you up."

The storm's blinding winds roared like a freight train, tearing roofs from houses and flapping trees around like blades of grass. But along with the winds came a storm surge, effectively raising the sea level several feet, with the storm's winds pushing it up creeks and rivers so that they flowed backwards, flooding the towns upstream.

Before v. After… homes swept off their foundations in Mexico Beach #HurricaneMichael #flwx #gawx pic.twitter.com/S7mWnh9hae

​Tyndall Air Force Base "took a direct hit" from the storm, base officials announced Thursday, noting they weren't sure how bad the damage was yet. However, aerial footage from Thursday morning paints a grim picture: whole forests snapped off a few feet above ground, buildings with their roofs torn off and collapsed aircraft hangers. The Air Force said it moved all aircraft from the base ahead of the storm, including the F-22 and F-35A stealth fighters the base trains pilots to fly, but in the helicopter footage below, several warplanes are visible inside the collapsed hangar, including F-16 Falcon interceptors. An F-15 Eagle on display with historic aircraft was flipped upside down by the winds, which clocked at 130 mph at the base — meaning the plane's wings likely behaved as if it was flying through the air, generating lift and flipping it over.

Hurricane Michael diminished to a tropical storm overnight as it moved across Georgia into the Carolinas. Winds were about 50 mph at 5 AM EDT. Here is a loop of satellite imagery of the storm from 1 AM to 6 AM. pic.twitter.com/r7r1jBNTEn

​"Michael is still a threat," North Carolina Governor Roy Cooper warned his constituents Thursday as the storm barrelled into their state. The storm is expected to dump between four and nine inches of rain on North Carolina and Virginia, and tornado watches and flash flood warnings are in effect across the region through the day.